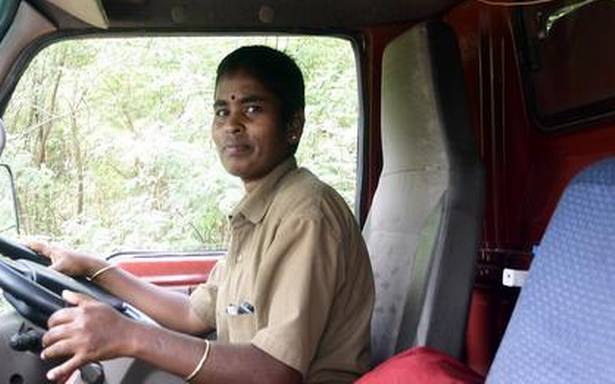 Have licence, will drive

Meet homemaker-cum-trucker K Sellammal, who is raring to go places

K Sellammal arrives in her Tata Sumo for her interview. As the only woman in her village with a commercial driver’s licence, and her own vehicle, the homemaker from Pachai Veli, Thirupanjali in Manachanallur Taluk, stands out from the crowd easily.

“Most of the women in my village are homebound; they would rather starve than step out of their comfort zone to earn a living. I took up driving in 2018 because I felt it would help me to supplement my husband’s income, and I loved vehicles,” says the 29-year-old mother of two children.

Guided by Women Entrepreneurs Association of Tamil Nadu (WEAT) in Tiruchi, Sellammal attended courses that put her on the road to becoming a professional driver.

Despite being licensed to drive two-wheelers, auto-rickshaws, cars and heavy vehicles, she was unable to find employment, mainly because of the bias against women workers.

The Sumo was a gamble Sellammal and her lorry driver husband A Kumaran took last year. With the four-wheel drive, Sellammal had hoped to become the first woman transport provider for a private school in Pachai Veli. “But I was asked to stay away on the very first day because the male drivers there didn’t want to work with me. I was devastated,” she remembers.

Worse, the couple was left burdened with a vehicle loan.

Unfazed, Sellammal decided to get licensed in heavy transport vehicle (HTV) driving by enrolling in a 45-day course at the Ashok Leyland Driver Training Institute in Namakkal in July 2019. She was the only woman in her class of 84 learners.

Sellammal’s multiple licences have brought her both bouquets and brickbats, but she tends to ignore her critics and focuses on the people who have helped her along the way.

“My husband is my biggest champion. When the men in our village laughed at me for daring to drive, and some even suggested I should get a sound thrashing, he would ask me to stay calm and keep at my lessons. His support has brought me this far.”

Sellammal at the valediction of her driving school in Namakkal. Photo: Special Arrangement/THE HINDU


From September last year, Sellammal has become her husband’s co-driver on the Ashok Leyland Boss BS4 6-wheeler intermediate truck (8 to 14 tonnes capacity) that he plies for a private transporter based out of Tiruchengode.

“Driving school isn’t enough for professional truckers, we have to learn how to deal with traffic on the roads,” says Sellammal. “My first trip, from Cuddalore to Kuttipuram in Kerala (nine hours by road) with my husband guiding me, was a bit nerve-wracking. But after that, it got easier, and now I can navigate any route alone confidently. I have driven on different terrains from Chennai, Arcot to Pollachi, taking produce like plantains, beetroots and tender coconuts to Kerala from Udumalapettai, and travelled on through Senkottai and Tirunelveli back home,” she says.

While truck drivers aren’t expected to offload their cargo, they do have to be extra careful when the vehicle is getting ready for a trip, says Sellammal. “There are some routes which aren’t considered safe for loads of food items like rice, so we have to keep checking to see that the stock doesn’t get stolen in transit,” she says.

Even though there are days when she gets only 45 minutes of sleep, when on the road, Sellammal says that she can easily manage up to 200 kilometers in a day at a moderate speed. “If you drive within the speed limit, and stay alert, there’s nothing to fear,” she says.

Like most truck drivers, Sellammal is paid 15 paise per ₹100 that a transport deal earns. “After the restrictions placed on sand-mining in the Cauvery delta, truck drivers’ earnings have gone down drastically,” she says. “And even though the material and fuel costs have increased, this doesn’t reflect on our income.”

A typical round-trip delivery run can bring in around ₹4000-8000 for the lorry driver in southern India. “Going on a long trip can help the drivers earn more,” says Sellammal, whose husband has gone to Gujarat when we speak. “But it can take a toll on the driver’s health.”

Though she is happy to help her husband, Sellammal feels becoming a bus driver would be more practical for her, as her two sons need her attention at home. “I am quite willing to work as part of a school team in Pachai Veli, until the kids complete their education. A few families have approached me to chauffeur their women family members on trips to the temples nearby in our Sumo, so that’s another option I am looking at,” she says.

The vehicle may vary, but Sellammal is sure to be in the driving seat for many years to come.