A group of more than 200 medical professionals including former Australian of the Year Fiona Stanley have launched a campaign urging energy giant AGL to close its coal-fired power plants by 2030.

The group’s organiser, Dr Kate Lardner, also emailed super fund HESTA last week to call for its support, saying the campaign would target the fund’s members directly if it did not use its position as a shareholder to pressure AGL to phase out its coal stations. 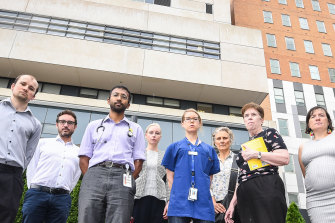 The campaign comes the same month EnergyAustralia brought forward the closure of its brown-coal-fired power station, Yallourn, by four years to 2028, a move its energy executive Liz Westcott said was a step towards a “clean future”.

AGL is forging ahead with the early closure of its Liddell power station in NSW by 2023 but has remained committed to operating Bayswater until 2035 and Loy Yang A in Victoria’s Latrobe Valley until 2048.

The letter, sent ahead of AGL’s investor day scheduled for March 29 and obtained by The Age and The Sydney Morning Herald, calls for the remaining plants to be phased out and replaced with renewable energy projects by the end of this decade.

“As healthcare workers and health organisations, we urge AGL to take this opportunity to create a business strategy that protects the health of Australians,” the letter said.

An AGL spokesman said the company is “committed to playing a leading role” towards decarbonisation and said its coal-fired power stations played a role in that transition. “AGL will continue to operate these assets responsibly and support our people and communities during our transition.”

AGL wrote down the value of production assets and contracts by $2.7 billion last month and its half-year results detailed the ongoing financial impact of coal plant outages and the rising cost of coal production.

“The profitability of much of NSW’s coal generation will come under pressure,” AGL chief operating officer Markus Brokhof told investors.

Dr Lardner said the early closure of these plants should be driven by climate but also financial concerns and has called on HESTA to use its boardroom access as an institutional investor in AGL to press this case.

“We see the next two weeks as a crucial time in which to encourage AGL to adopt a business strategy that best reduces their impacts on climate change and human health,” Dr Lardner said in an email to HESTA’s head of responsible investment Mary Delahunty on March 10. “Would you be able to meet via Zoom anytime this week to discuss this?”

The $60 billion super fund did not respond to the letter. HESTA owns 0.4 per cent of AGL, or $23.8 million worth of shares. In a statement, Ms Delahunty said the fund would continue to engage with AGL on closing power plants, but added a “disorderly transition” could be devastating for small communities where the plants are located.

“To achieve an early closure will require significant coordination with all levels of government and considerable new investment in renewables. Simply closing plants without carefully managing the community impact is irresponsible and could have a detrimental impact on areas like the Latrobe Valley,” she said.

“People who aren’t supporting this now in government and in industry are going to regret it.”

HESTA was among the cohort of large industry super funds that voted against a shareholder resolution at AGL’s annual general meeting last year to bring forward the closure of Loy Yang. The world’s largest asset manager BlackRock supported the motion.

Acclaimed epidemiologist and 2003 Australian of the Year Fiona Stanley said it was a “no brainer” that AGL should exit coal sooner than planned.

“The data is overwhelming about the impact of climate change, and the big thing is the health and wellbeing of children,” Dr Stanley said. “People who aren’t supporting this now in government and in industry are going to regret it.”

University of Melbourne Professor in Public Health Rob Moodie, who also signed the letter, has said coal-fired power stations cause both air and water pollution, as well as making wider contributions to climate change.

“In terms of what coal does, in terms of what is produces in airborne toxins and pollutants,” he said. “It’s estimated nearly 800 Australians die as a result of coal fired power stations every year. And there are also over 14,000 episodes of children experiencing asthma each year.”

Professor Moodie said financial institutions should be conscious of stranded assets – those that become liabilities due to changes in the market – but also recognise the investment opportunity presented by the renewable energy sector.

The activist group of doctors, Healthy Futures, launched a campaign last February to encourage HESTA to divest from fossil fuel producers they claimed had businesses incompatible with the goals of the Paris Climate Agreement. The doctors staged protests and launched a petition as the campaign gained momentum following the horror summer bushfires of 2020.

Four months later, HESTA launched a revamped climate policy committing to divesting from all companies that make more than 15 per cent of revenue from thermal coal and outlined plans to achieve net zero emissions across its investment portfolio by 2050, the first major fund to formalise the target.

Dr Lardner welcomed this policy but said there was more to do. “HESTA is one of the five major super funds that can engage with AGL,” she said. “If they stonewall us, we will put pressure on HESTA’s member base.”