Tom Fitton, president of Judicial Watch, shares his own experience with being censored by Twitter: ‘It’s a terrible time for America.’

Merkel, of the center-right Christian Democratic Union Party, ceded her place in the Bundeskanzleramt on Tuesday to Chancellor Olaf Scholz, a member of the left-leaning Social Democratic Party.

In commemoration, Clinton tweeted a photo of her and Merkel together, with a message praising the 67-year-old chancellor’s 16-year tenure.

“After a decade and a half in power, Angela Merkel passes on the chancellorship of Germany today,”.

“She led Europe through difficult times with steadiness and bravery, and for four long years, she was the leader of the free world. Thank you, Angela.”

Observers keyed into the penultimate sentence as a very likely shot at Trump, whose often-upfront governance was criticized on the political left both domestically and abroad.

Clinton, however, is not the first visible American figure to make the claim that Merkel supplanted Trump as “Leader of the Free World” – a moniker traditionally reserved for the American president, who leads the world’s largest economy.

During an appearance at the annual SXSW event in Texas in 2017, CNN anchor Jake Tapper did so while lambasting Trump’s denigration of certain media outlets:

“It’s a difficult environment when the commander in chief of the country, I’d say, Leader of the Free World, but I think that’s Angela Merkel now, [he] hears anything he doesn’t like and calls it, ‘fake news,’,” Tapper quipped at the time. 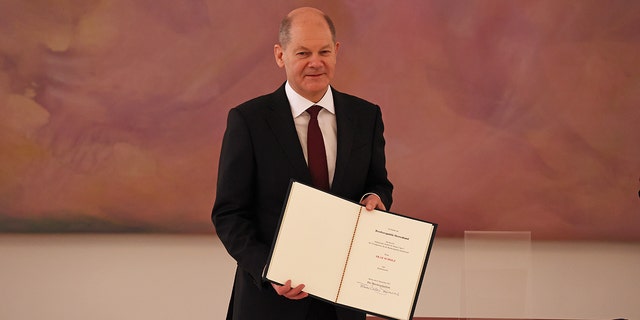 A 2016 Washington Post “analysis” also made the claim that Merkel “became leader of the free world” during Trump’s tenure.

In Berlin on Tuesday, Scholz said he promises to “take up the major challenges of this decade and well beyond that.”

Merkel wished Scholz luck at a handover ceremony at the chancellery. “Take possession of this house and work with it for the good of our country,” she said. Scholz thanked Merkel for her work, telling her “you made your mark on this country.”