The 1,119-page bill, a draft of which HuffPost obtained, aims to defibrillate the economy, fund new research and provide a lifeline to households struggling amid the tsunami of job cuts that followed calls by public officials to shut down most businesses as health workers scramble to contain the pandemic.

The legislation, which has not yet been released, offers a counter to Senate Republicans’ own $2 trillion bill. Senate Democrats blocked a procedural vote on the bill for a second time on Monday over its giveaways to big business, lack of climate provisions and concerns it would create a $500 billion fund that could be doled out to companies in secret and at the discretion of Treasury Secretary Steven Mnuchin.

House Speaker Nancy Pelosi issued a press release Monday afternoon announcing the legislation as the Take Responsibility for Workers and Families Act. Her office did not immediately respond to a request for comment on Monday. The final bill could change from the draft detailed here.

The House bill’s climate measures focus primarily on the airline industry, which requested $50 billion to avert a total collapse amid a steep drop in air travel. The bill gives the Department of Transportation $200 million per year from 2021 to 2026 to fund grants to boost lower-carbon jet fuels, and earmarks another $100 million per year during the same period for the Federal Aviation Administration to carry out its own research into such fuels. 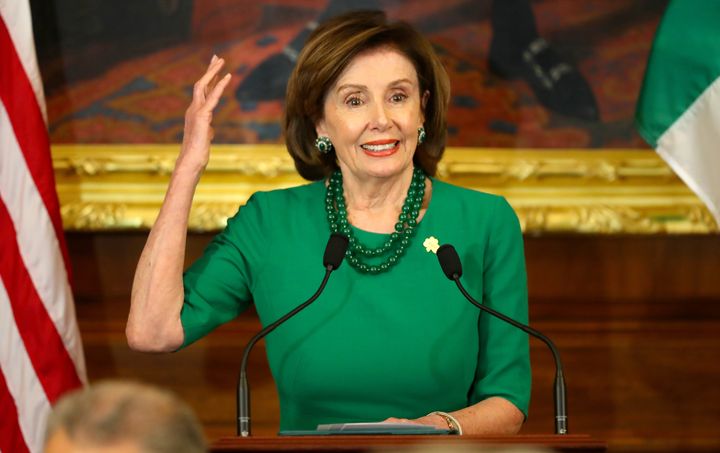 Airlines produce roughly 3% of global emissions today. But that percentage is forecast to triple by 2050. Over the past decade, airlines cut spending on researching more sustainable fuels and improved fuel efficiency three times slower than air travel ticked up. The Trump administration, meanwhile, has focused federal research efforts on reviving the super-polluting turbojet industry, even as Canada and European countries invested heavily in electric aviation.

If passed, the bill would direct the FAA to require every airline to fully offset emissions ― a policy requiring companies to pay for renewable energy or tree-planting to balance out pollution ― for all domestic flights by 2025. It would also order the FAA to enact regulations forcing domestic carriers to cut emissions 25% below 2005 levels by 2035, a figure that climbs to 50% by 2050, and mandating airlines release data on the carbon dioxide emissions linked to each flight by 2023.

The bill allots $1.5 million for the Transportation Department and the National Academy of Sciences to study ways to cut emissions from the aerospace sector.

The provisions are in line with what Sara Nelson, the powerful leader of the Association of Flight Attendants (AFA-CWA) union, told HuffPost on Friday that she supported. Her union was among the first in the country to endorse the Green New Deal, a framework for a sweeping industrial policy to cut emissions and transition fossil fuel workers to new careers.

However, the legislation falls well short of the demands progressive climate wonks ― some of whom some recently advised the Democratic presidential campaigns of Bernie Sanders, Elizabeth Warren and Jay Inslee ― set out in a lengthy letter on Monday morning.

That proposal ― endorsed by Gina McCarthy, the former Environmental Protection Agency administrator who oversaw the Obama administration’s biggest climate regulations, and Henk Ovink, the Dutch special envoy on water issues to the United Nations ― sought bailouts for public transit systems, the phaseout of all fracking and offshore oil drilling and funding to rebuild and electrify the nation’s ports.

“Most of the physical work proposed here cannot begin immediately. We must focus on halting the spread of deadly illness,” reads the letter, published Monday morning on Medium. “However, we can do all the preparatory work now to make green projects ‘shovel ready.’”

Still, it’s unclear how much conservatives in the Senate would agree to, even if additional climate provisions passed in the House. In a fiery speech on the Senate floor Monday afternoon, Sen. Joe Manchin (D-W.V.) called on the Republican majority to negotiate in good faith on corporate giveaways but criticized his fellow Democrats for including climate rules.

“I am not for the green deal,” he said. “Who’s throwing that stuff in? I have no idea. I wouldn’t vote for it.”