The House Select Committee to Investigate the Jan. 6 attack on the U.S. Capitol asked Rep. Jim Jordan, R-Ohio, on Wednesday for his “voluntary cooperation” in their probe into the events leading up to the riot.

“We understand that you had at least one and possibly multiple communications with President Trump on Jan. 6,” read the letter to Jordan from Jan. 6 Committee Chairman Bennie Thompson, D-Miss.

Chairman Rep. Bennie Thompson, D-Miss., meets with the select committee on the Jan. 6 attack as they prepare to hold their first hearing on Capitol Hill, Monday, July 26, 2021. (AP Photo/Andrew Harnik)

“We would like to discuss each such communication with you in detail. And we also wish to inquire about any communications you had on January 5th or 6th with those in the Willard War Room, the Trump legal team, White House personnel or others involved in organizing or planning the actions and strategies for January 6th,” the letter continued, referring to the hotel where Trump allies were gathered.

“Public reporting suggests that you may also have information about meetings with White House officials and the then-President in November and December 2020, and early-January 2021, about strategies for overturning the results of the 2020 election. We would also like to ask you about any discussions involving the possibility of presidential pardons for individuals involved in any aspect of Jan. 6 or the planning for Jan. 6,” the letter went on. 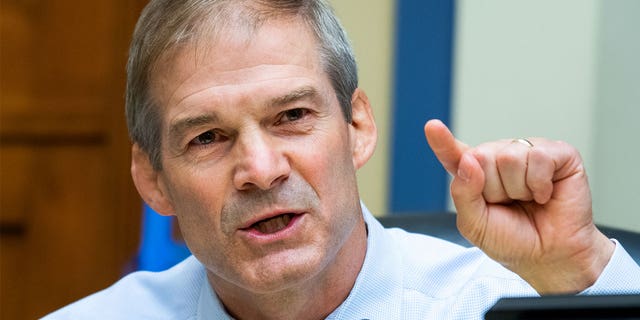 Jordan, who was a congressional ally of former President Donald Trump, has said he spoke to Trump on Jan. 6, but has maintained that he has “nothing to hide.”

The House Jan. 6 Committee’s request echoes one they issued Monday to Rep. Scott Perry, R-Pa., who declined to appear before them as part of their investigation.

The committee had sent Perry a letter asking him to appear, stating that they wanted to speak with him regarding alleged efforts to make Jeffrey Clark acting attorney general days prior to the protests.

“I stand with immense respect for our Constitution, the Rule of Law, and the Americans I represent who know that this entity is illegitimate, and not duly constituted under the rules of the US House of Representatives,” Perry tweeted Tuesday morning.

“I decline this entity’s request and will continue to fight the failures of the radical Left who desperately seek distraction from their abject failures of crushing inflation, a humiliating surrender in Afghanistan, and the horrendous crisis they created at our border,” he said.