“They present President Trump as merely like a guy at a rally expressing a political opinion we disagree with, and now we’re trying to put him in jail for it,” Raskin said of Trump’s legal team. “That has nothing to do with the reality of these charges or his constitutional offense.”

“The factual premise and legal underpinnings of that argument are all wrong,” he added.

He continued: “But if the president of the United States [is] doing that ― uttering the exact same words, expressing support for the enemies of the United States and for overthrowing the government ― is there anyone here who doubts that this would be a violation of his oath of office to preserve, protect and defend the Constitution?”

“If you’re president of the United States, you’ve chosen a side with your oath of office,” Raskin added. “And if you break it, we can impeach, convict, remove and disqualify you permanently from holding any office of honor, trust or profit under the United States.”

In closing his argument, Raskin quoted the late conservative Supreme Court Justice Antonin Scalia, who, in a dissent in Rankin v. McPherson, said, “you can’t ride with the cops and root for the robbers.” 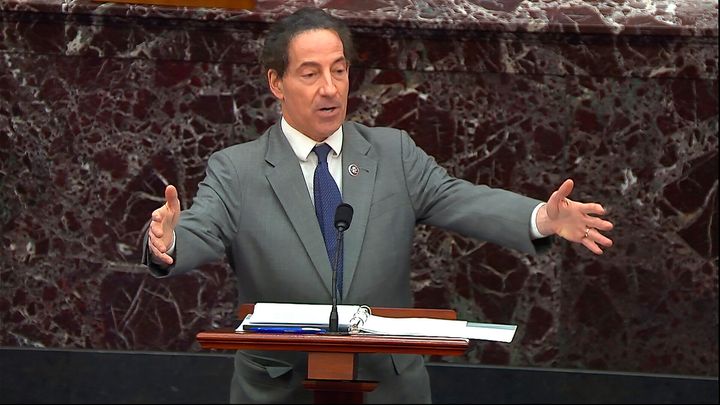 In their letter, these constitutional scholars argued that the First Amendment has no application in an impeachment trial, which is not a criminal trial — and that even if it did, the president can be tried for violating his oath of office. They also argued that Trump’s incitement to violence on Jan. 6 is not even protected speech to begin with.

Raskin also noted that many Americans may see Trump’s statement through the lens of former Supreme Court Chief Justice Oliver Wendell Holmes’ oft-quoted (and misquoted) decision in U.S. v. Schenck, “The most stringent protection of free speech would not protect a man in falsely shouting fire in a theatre and causing a panic.” (Holmes’ decision in Schenck was overturned 40 years later and is no longer applicable.) But Raskin said that the popular Holmes quote did not come close to describing what Trump did on Jan. 6.

“This case is much worse than someone who falsely shouts ‘fire’ in a crowded theater. It’s more like a case where the town fire chief, who’s paid to put out fires, sends a mob not to yell fire in a crowded theater, but to actually set the theater on fire,” Raskin said.

This “fire chief” should face punishment, he argued — but faced with removal from office, Trump “says we’re violating his free speech rights just because he’s pro-mob or pro-fire or whatever it might be.”

“Come on,” Raskin said with a smirk. “You don’t really need to go to law school to get what’s wrong with that argument.”