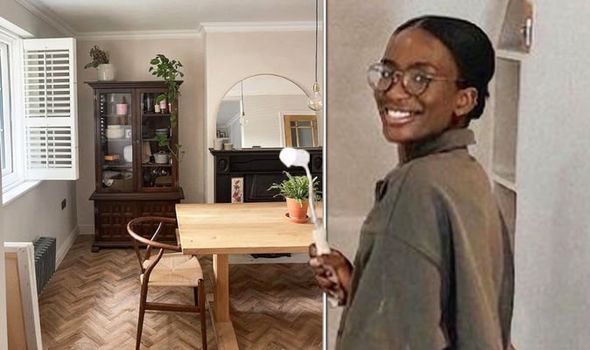 Liv Madeline and her partner are renovating their Zone 4 London flat on a budget. The pair have pulled off a renovation which would have cost to the tune of £60,000.

The midwife documents the renovation of her two-bedroom property, across two floors and boasting a garden on her Instagram account and on Youtube where she posts DIY insights.

The couple found the ex-council flat thanks to Liv’s partner, who works as an estate agent.

The pair paid just £295k for the property, a relative steal compared to house prices the North London area.

Liv told Express.co.uk: “How much is cost was really the reason we bought it. We knew we’re never going to find something like this in London for this amount.”

However, the 50s flat had last been renovated in the 80s and needed a lot of work.

“When we started we had to do literally everything,” Liv said.

“Obviously now, in modern houses wherever you’ve got cables and pipes, everything’s under the floorboards or combined in walls, but with this property everything was wall-mounted so you could see the pipes on the walls, electric wires on the walls, which weren’t covered up. It’s very dangerous.

“The carpet was icky. We had to bring everything back to brick.

“At the time, we were complete beginners so we had no idea where to start, it was very overwhelming.”

The couple initially approached professionals but soon realised the costs would be huge.

Liv said: “We interviewed quite a few contractors got them around the house, from companies from individuals, got all the figures.

“After, we sat there and we were just like there is no way we’re going to be able to afford this, especially because of our age and everything, and because we put down a bigger deposit.

“We put down 20 percent rather than 10 percent, so there was just no money.

“We came to the conclusion that we were just gonna have to do 60 percent of the works on our own. To be honest we pretty much did as much as we could on our own before the professionals needed to come in so like the electrics, plumbing, etc.”

The couple has saved a huge sum this way and avoided taking out a loan.

The couple was being quoted between £50k and £60k for the work they managed to do alone, despite being total beginners.

Liv said: “We’ve been kind of doing things on a monthly basis.

“We have saved loads of money doing it ourselves, but I couldn’t tell you exactly how much we’ve saved, but we haven’t paid anything near the 50 to 60 grand we were originally quoted, nowhere near.

“One thing that most people tend to do, once they’ve bought a property, they get project managers in and they tend to then apply for a loan but we really didn’t want to do that.

“The mortgage is debt on its own, we didn’t want to add another stress on our shoulders.

“We decided we’ll just do it on a monthly basis. It’s just been our monthly incomes, we’ve put some aside some for us and everything else has been going towards the flat.”

Liv also detailed how she created DIY alcoves on a budget in her home.

Liv worked with a plasterer to create the look she wanted, with a central fireplace shoot and cupboards and shelves built into the space on either side.