How Democrats might approach altering the filibuster for voting rights 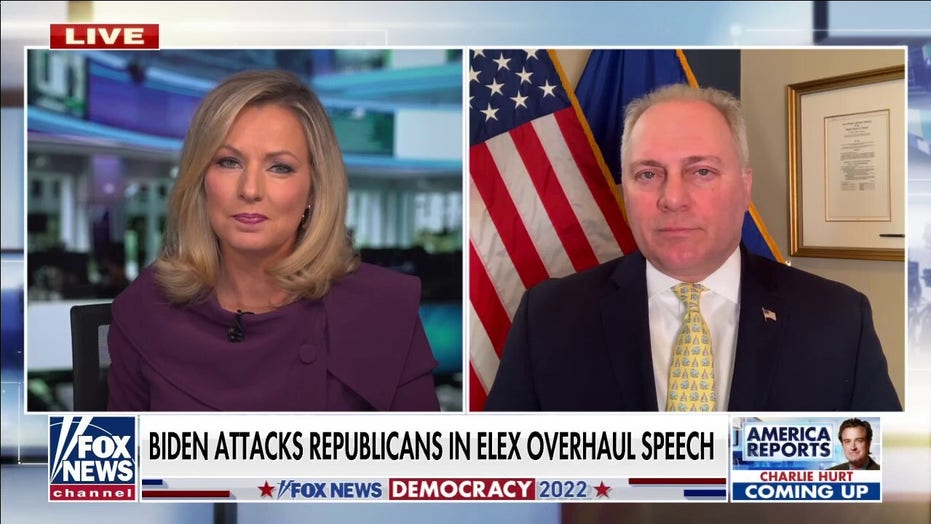 Rep. Scalise: Biden’s call to action on voting rights, nuking the filibuster is a ‘recipe for disaster’

Senate Majority Leader Chuck Schumer, D-N.Y., has not yet tipped his hand to what sort of votes the Senate may take in the coming days regarding voting rights, or votes to alter the filibuster.

Regardless, at this stage, Schumer lacks the votes to overcome a GOP filibuster of the bill. Schumer is also short on votes to alter Senate filibuster provisions. Therefore, Schumer doesn’t have the votes to pass the bills.

Those three things are the only certainties about the Senate over the next few days.

Schumer has just said that the Senate will take a vote related to voting rights and the filibuster sometime between now and Martin Luther King Day, Monday, January 17.

It’s possible the Senate could be in session this weekend and, those key votes, could fall over the weekend.

So, let’s start with the possibilities:

Schumer attempted to bring up voting rights measures on a couple of occasions last year. Breaking a filibuster just to launch debate on a bill, and, closing debate on the underlying bill itself, requires 60 votes. Schumer has at least one or two of these “failed” procedural votes left over in his hip pocket. A failed procedural vote to end a filibuster (known as a cloture vote) is what Schumer needs if he tries to alter Senate procedures surrounding the filibuster. Or, Schumer could force the issue on a “motion to proceed” to call up one of the two voting bills Democrats are touting now. A failure to break the filibuster to start debate would give Schumer a third failed cloture vote with which to work to change filibuster provisions.

Such a gambit is called “the nuclear option.”

The Senate has 44 Standing rules. But one must first overcome a filibuster to make an actual change to those rules. And, the Senate currently requires 67 votes to end a filibuster on a rules change.

So, that’s not going to work.

However, the Senate conducts much of its business based on precedent. This is a voluminous set of parliamentary criteria based on previous Senate maneuvers. In short, if you struggle to change “the rules,” perhaps try to “establish a new precedent.”

Democrats detonated Nuclear Option I when they held the majority in 2013. Democrats were frustrated with GOP filibusters of President Obama’s executive branch nominees. The late Senate Majority Leader Harry Reid, D-Nev., took a failed cloture vote on an executive branch nominee (the necessary tool to establish a new precedent) and lit the fuse to lower the bar for all future nominees – except those tapped for the Supreme Court. When the GOP was in the majority in 2017, then-Majority Leader Mitch McConnell, R-Ky., used a similar approach for Nuclear Option II. McConnell specifically dropped the threshold to end filibusters on Supreme Court nominees from 60 to a simple majority.

What’s left intact is the 60 vote requirement to end filibusters related to legislation. Both voting rights bills are legislation, not nominations – as was applicable with Nuclear Options I, and II.

Let’s say Schumer tries to bring up one of the voting rights bills. He must file a “cloture petition” to proceed to the bill. By rule, cloture petitions require an “intervening day” before they are “ripe” for a vote. So, let’s say Schumer files cloture to end debate on the motion to proceed to one of the voting bills Wednesday. By rule, the Senate can’t actually take the cloture vote until Friday. Thursday serves as the “intervening day.” Thus the Senate would vote Friday to break the filibuster to start debate on the voting bill. If it fails to marshal 60 yeas, Schumer has the tool needs to go nuclear: a failed cloture vote.

This is where Schumer could trip the nuclear wire.

If Schumer is using a “new” voting bill that failed to get 60 yeas, he must switch his vote to wind up on the “prevailing side” of the cloture vote. In other words, the Republicans won. The “nay” side (against ending the filibuster) won. By briefly siding with the GOP, Schumer is allowed to demand a re-vote on the same issue.

So, if this happens Schumer could immediately “enter” or make a “motion” to reconsider the vote. If it’s the former (“enter”), the next key vote may not happen right away. Perhaps even the next day. If it’s a “motion,” the key vote could happen soon – but it’s unclear how soon.

Regardless, Schumer will then have at some point the failed vote necessary to execute a nuclear option.

Schumer may not make a point of order that the Senate only needs a simple majority (51) votes to terminate debate and break filibusters related to voting rights. Whatever Democratic senator is presiding – or, Vice President Harris – will rule that Schumer is wrong. That is NOT how the Senate operates. Sixty votes are necessary. But Schumer would then appeal the chair’s ruling, saying in essence it is in fact the way the Senate operates. The Senate only needs 51 votes to end filibusters related to voting rights bills. That is the “filibuster carve out” for voting rights that we have heard so much about.

Schumer’s maneuver immediately triggers another vote. If all 50 Democrats and Vice President Harris vote yes, in favor of Schumer’s appeal, then voilà, the Senate has established a new precedent, a la Nuclear Options I and II. This is “Nuclear Option III.” There is then a “filibuster carve-out” in the Senate for bills related to voting rights. If so, only 51 votes are necessary to end filibusters on those types of bills. But a 60 vote threshold remains in place for all other types of legislation.

That is the nuclear option.

However, we don’t expect Schumer to have the votes to successfully launch a nuclear option. Sens. Joe Manchin, D-W.Va., Kyrsten Sinema, D-Ariz., and others are reluctant to alter Senate precedent on the filibuster.

The question is whether or not Schumer will carry out an unsuccessful nuclear strike. Schumer is playing his cards close to his vest. Does McConnell really want to lose on the floor and have multiple Democratic senators on the record as voting against changing Senate precedent?

To be clear, that may be part of Schumer’s gambit. He gets Republicans on the record as blocking the bill and the precedent change. Schumer can then portray those GOPers as “obstructionist.” But Schumer also engages in some internecine warfare here. Left-wing groups will then turn up the heat on Democratic senators who oppose the gambit. The hope by progressives is that those moderate senators eventually change their position.

The other question is whether Schumer simply decides that a “failed cloture vote” in an effort to start to debate on a voting rights bill is THE vote he wants to emphasize. That could potentially short-circuit and abbreviate all of the machinations listed above. In other words, the Senate votes later this week or on Martin Luther King Day on Monday and that’s it.

But, it’s also possible Schumer could tee up the key vote (in whatever form it takes) for Monday and hold the Senate in session throughout the weekend, burning clock. Republicans might not participate. The Democrats could just rail on the floor all weekend long.