Treasury Wine Estates is counting on a $434 million acquisition to spearhead a chardonnay-led revival of its chronically underperforming US business.

Rarely has a deal looked so neat and compelling on paper. It’s a financial and strategic box-ticker. But it comes with undeniable risks – none of which, if borne out, will be apparent for a few years.

TWE’s chief executive, Tim Ford, provided an anecdote in which he unwittingly but neatly illustrated the risk. He said the owners of the California-based winery Frank Family Vineyards, Rich and Leslie Frank, chose TWE to buy the business and that price wasn’t the family’s only consideration. Ford took it as a badge of honour the Franks’ faith that Treasury would ‘treasure’ the family brand and the ongoing quality of their luxury end wine labels. 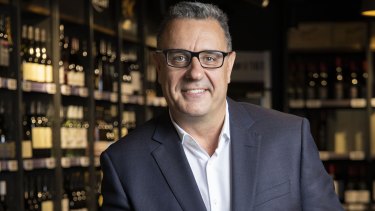 Treasury Wine Estates chief executive Tim Ford has made a play in the US luxury wine market.Credit:Wayne Taylor

But when a corporate buyer swallows an artisanal brand-crucial family business, history says the failure rate is high.

And by luxury they are referring to cork-sniffing wines that kick off at more than $52 and run up to $310 a bottle.

(Let’s say it’s not the chardonnay drop Kath and Kim would have opened for their nightly ‘wine time philosophy’ sessions in the backyard at Fountain Lakes.)

Listed corporate wine businesses operate very differently to family winemakers that are more about passion than profits. Understandably companies such as TWE have obligations to their shareholders to grow volumes and revenue, and need to overlay their operational processes to achieve that.

The plan is to use TWE’s distribution network to increase sales of Frank Family wines over time. And given the Frank Family is currently selling everything that it makes, the volume produced would need to rise.

It remains to be seen whether there is a cultural clash. The Frank Family winemaker is staying on while Rich and Leslie will remain as (real) consultants.

On the sale, Rich Frank commented, “Leslie and I look forward to continuing to be a part of the next chapter of Frank Family Vineyards, a business we have spent nearly three decades cultivating into a beloved luxury wine brand.

“We have prided ourselves on creating a family atmosphere among our staff and our guests and know this legacy will carry on. We, along with our team, are excited to remain actively involved with Frank Family, while also taking on new leadership roles with Treasury Americas.”

The analogy could be made with clothing designers selling out to large corporations that over time lose the brand’s flavour and value.

In winemaking, adding grapes into the mix that were not quite up to standard in order to pump volume was a potential issue that a couple of analysts raised with TWE executives on Thursday.

Add to this the long history of Treasury and its unsuccessful attempts to buy its way out of trouble in the US and it is not a stretch to harbour some concern about whether this not insignificant acquisition won’t end in tears.

On the positive side Ford seems to be acutely aware of these potential pitfalls and maintained that diminishing the Frank Family brands was a commercial no-no. And to be fair, TWE has shown its expertise in delicately managing its high-end Penfolds brand, so that has to be a plus.

If one puts these risks aside, this is a deal that is completely aligned with TWE’s stated intention of beefing up its stakes in the luxury end of the US market and getting out of the lower end categories – that are referred to by the industry as “commercial”.

It has been selling off its US commercial portfolio for a while – which has successfully part-funded the acquisition of Frank Family Vineyards.

In particular, the Frank Family purchase gives TWE a stronger presence in Chardonnay – thus filling a portfolio hole. TWE picked up the company for a price which, based on other wine acquisitions, is pretty favourable.

Treasury also said the deal would be immediately earnings accretive – which certainly went down well with shareholders and analysts and explained the immediate 3.3 per cent sparkling-wine-like pop in the share price.