New York (CNN Business)Huawei’s chief financial officer will be in a Canadian court this week for a highly anticipated hearing. It’s a major step toward determining whether she will be extradited to the United States, and a critical test for a Chinese company that has become emblematic of US-China tensions.

Meng Wanzhou’s case has been closely watched since she was arrested in Vancouver in late 2018 at the behest of the US government, which has charged her and Huawei with bank fraud and evasion of economic sanctions against Iran. Both she and the company have denied the charges, and Meng has accused US and Canadian officials of unlawfully detaining, searching and interrogating her. Canada’s attorney general said in a September court filing that there was “no evidence” to Meng’s allegations “that lends an air of reality.”
This week isn’t just about the fate of Meng. Her extradition trial is a big test in a series of many this year for the Chinese tech company her father, CEO Ren Zhengfei, built more than three decades ago. Huawei has faced enormous pressure from the United States as it tries to grow its 5G and smartphone businesses.

The case has also strained the relationship China and the United States, and has put Canada in an awkward position between the two world superpowers. And though Washington and Beijing recently reached at least a temporary truce in the trade war, Meng’s case shows those tensions aren’t going away entirely.

Meng has been under house arrest in Vancouver — where she had to surrender her passports and agree to live in one of two homes she owns in the city — while waiting to find out whether she will be extradited to New York. There, US authorities want her to face federal charges related to what they claim was a scheme by Huawei to misrepresent itself to British bank HSBC in order to circumvent US sanctions on Iran. 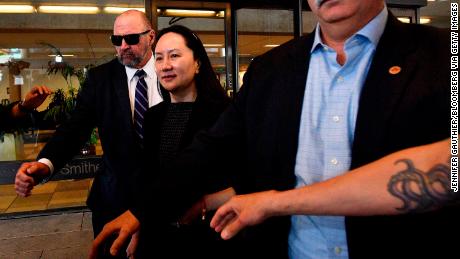 This week’s trial is expected to run until Thursday and will cover whether the conduct for which the United States wants to try her meets Canada’s “double criminality” standard for extradition. To be extradited from Canada, the alleged conduct the person will be tried for in the destination country must also amount to a crime in Canada.
Meng’s defense team has argued in court filings that because the US case involves the alleged violation of sanctions against Iran that do not exist in Canada, that standard is not met.
But Canada’s attorney general argues the alleged conduct would also have been illegal in Canada, since allegedly lying to HSBC could have put the bank’s financial interests at risk.
Even after this week’s hearings end, the case could still take months or years to play out. If the court finds Meng’s case meets the “double criminality” standard, subsequent hearings will consider other elements of the extradition case. Meng, for example, has accused Canadian border patrol agents of infringing on her rights when they detained her at the Vancouver airport in late 2018. Canada’s attorney general said in a September court filing that the border agency “acted pursuant to lawful authority.”
Eventually, a federal judge will determine whether to refer the case back to the country’s attorney general, who also acts as the minister of justice. The minister — the highest-ranking legal adviser in Canada — will have the ultimate authority in deciding whether Meng should be extradited.
If the court finds this week that the “double criminality” standard has not been met, though, Meng could be released.
The case will likely have ramifications for all three countries involved, too. After Meng was arrested, China detained two Canadians on spying charges and urged Canada to release Meng. The arrests were widely seen as retaliation for Meng’s arrest. The Chinese government said at the time that there was no comparison between the two cases. A foreign ministry spokeswoman said of the Canadians that they “cannot cover up their ignorance for the real facts and their contempt for the rule of law and people around the world are ridiculing them for this.”
The situation leaves Canada in a tight spot as it seeks to honor its reciprocal law enforcement arrangement with the United States, too.

Meng’s case kicks off what Huawei has predicted will be a “difficult year” in 2020. Huawei is coming off of what was already a tough 2019, during which time the Trump administration waged legal battles against the company and cracked down on its ability to operate in the United States. The US government has long raised concerns that Huawei poses a national security risk and that Beijing could use the company’s products to spy on other nations, allegations the company has fiercely denied.
The allegations that Meng and Huawei committed bank fraud and circumvented sanctions are not the only legal case brought against the firm by the US government. Federal authorities have also accused Huawei of trying to steal trade secrets from T-Mobile. That case is pending. Like the Iran sanctions case, Huawei has pleaded not guilty and denied those charges.
Then in May, the Trump administration placed Huawei on a trade blacklist that barred American firms from selling to it without a license — a move that threatened to undermine the company’s supply chain and its ambition to become the world’s top smartphone seller. The ban prevented Huawei from working with Google, cutting off its smartphones from the Silicon Valley firm’s services and hurting global sales outside of China, according to independent research. 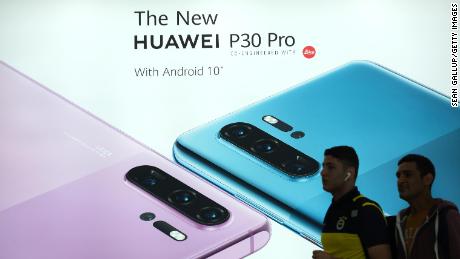 Meanwhile, the United States has urged its allies to block Huawei’s products from their 5G networks — a decision that would box the Chinese firm out from working with countries on a crucial next generation network technology.
It’s not clear whether those efforts will be successful. While the Australian government banned Huawei from providing 5G tech for its networks, the United Kingdom and Germany have left the door open.

“The Brits are going to figure out if the special relationship is strong enough they can get away with buying Huawei,” said Jim Lewis, senior vice president at the Center for Strategic and International Studies. “They’re testing the waters on that. I don’t think they have a clear signal from the US.”
— CNN’s Brian Fung contributed to this report.
Source: Read Full Article