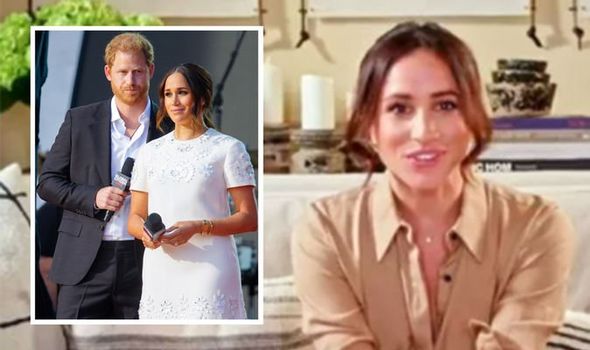 Prince Harry and Meghan Markle moved to Montecito, Santa Barbara in July 2020. This year will be their second Christmas in LA, so how will it look inside compared to the traditional Royal Family’s properties this time of year?

According to Variety, Harry and Meghan’s home is said to have cost them £11million.

In August 2020, a spokesperson for the Sussexes told People: “The Duke and Duchess of Sussex moved into their family home in July of this year…

“They have settled into the quiet privacy of their community since their arrival and hope that this will be respected for their neighbours, as well as for them as a family.”

Their home in Montecito is approximately 100 miles away from Los Angeles.

Much like the rest of the world, the Duke and Duchess of Sussex found themselves spending more time at home during the COVID-19 pandemic.

As a result, the couple’s home decor was revealed to the world via many video calls.

Soon after moving into their new home, Meghan and Harry gave a small glimpse into the property, which revealed beautiful windows and well-placed foliage.

During a video call for the Invictus Games Foundation, Prince Harry sat in front of a white cabinet, and paint swatches in several colours were visible on the wall behind him.

When Meghan sat down for a conversation with Gloria Steinem for MAKERS Women, it took place in their garden.

Then, during a solo appearance on America’s Got Talent, Meghan gave fans a glimpse of another room.

She sat on a beige linen couch, which had lots of large cushions with geometric black and grey lines on them.

The wall behind her was painted in a soft yellow and had three pictures – bird nests from Barloga Studios – hung above a console table.

On the console table was a Diptyque candle, a bouquet of hydrangeas, and a stack of coffee-table books.

When Meghan chatted to charity Smart Works, another area of the home was shown.

The Duchess sat in front of a stone fireplace that displayed a vintage print of a bear holding the state of California.

The artwork is taken from the cover of the sheet music for “I Love You, California”.

The property also reportedly includes an arcade and games room, a movie theatre, wine cellar and spa with two saunas.

It has also been said there is a garage which has space to store up to five cars.

Outside, there is no shortage of space as their grounds are said to span 7.38 acres.