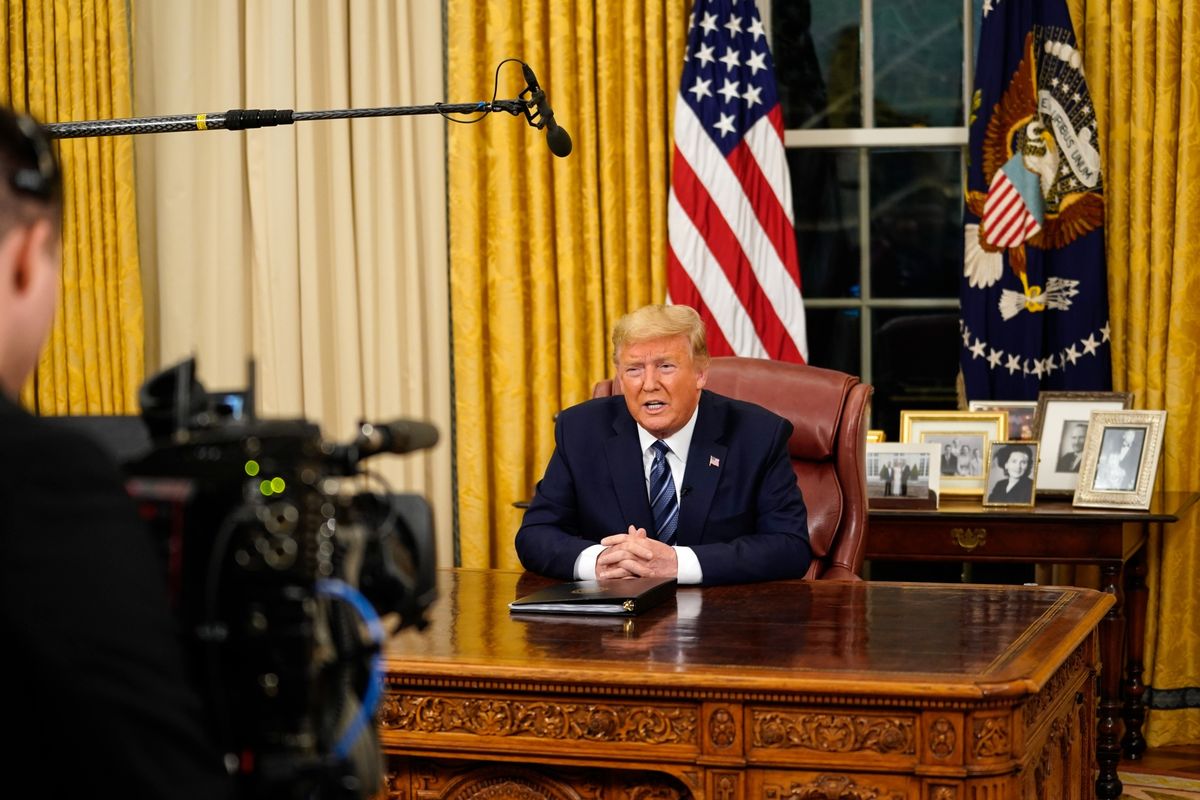 Inside the Oval Office, a Fierce Fight Over Trump’s Virus Speech

Donald Trump sat in the Oval Office Wednesday before the biggest speech of his presidency, listening to his aides argue about whether barring Europeans from traveling to the U.S. would trigger a global depression.

The medical experts on his team were adamant: The best way to slow the spread of the novel coronavirus was to buy time by keeping Europeans out, they said, with the hope the virus may naturally ebb in the warmer weather, according to people familiar with the deliberations. Treasury Secretary Steven Mnuchin and Larry Kudlow, the president’s top economic adviser, pushed back strongly, saying the economic cost would be steep.

Trump let them go on for a bit, then had heard enough. He dispatched some of the advisers into the nearby Cabinet Room and told them to come back with a plan they could all stand behind, said two of the people, who like others asked for anonymity to describe internal deliberations. When they returned with almost everyone endorsing the travel restrictions, Trump agreed to do a prime-time address to tell the nation.

His aides now see this moment as the most crucial of Trump’s presidency, the time when voters will decide whether he deserves re-election. “We’re going to win or lose right here,” one said. Another said that if the stock market is lower than when Trump took office, it would shatter his claim to being the one person who can keep the economy on track.

If that’s truly the measure voters will use, Trump’s speech Wednesday did little to win their confidence or to win himself a second term.

The S&P 500 plunged nearly 10% on Thursday, chalking up its worst loss since the crash in 1987, even after the Federal Reserve took aggressive steps by flooding the market with liquidity and widening its purchases of U.S. government securities.

The speech was Trump delivering — one day late — a report he promised to the nation on his virus plan. It came after a rolling, day-long series of meetings at the White House, capped by Trump’s decision to endorse the travel restrictions. But beyond the travel ban, the economic measures he announced — paid family leave and small business loans — were modest and vague.

The hastily drafted 10-minute speech had undergone last-minute edits from the president and one of his senior advisers, Stephen Miller, after other aides had left the room, one of the people said. Among the changes they made: deleting a sentence where Trump said he and Melania were sending their prayers and love to people suffering from the illness.

The final draft that aides loaded into TelePrompter contained two significant factual errors and Trump himself inadvertently added another by mixing up his words.

Trump told Americans that “we will be suspending all travel from Europe to the United States for the next 30 days.” That wasn’t accurate. When the details were released later that evening, the rules barred foreigners who had been in Europe in the previous 14 days from entering the U.S. He stumbled over the words when announcing cargo wouldn’t be interrupted, accidentally announcing that trade would be cut off. And he said the nation’s health insurance providers had agreed to pay co-pays for virus testing and treatment, something the industry quickly denied.

But the most important and most controversial proposal came not from Trump himself but from the medical experts on his virus task force, led by Deborah Birx. A medical doctor appointed to be the State Department’s ambassador for AIDS prevention, Birx made an impassioned case to suspend travel from Europe, the people said.

She presented a detailed case on how many of the new cases in the U.S. can be traced to Europe. If travel had been shut down earlier, she added, the outbreak could have been contained to a few states. Health and Human Services Secretary Alex Azar backed her up, two of people said.

Mnuchin was strongly opposed, saying that nobody was taking into account the damaging blow it would deal to an economy already shaken by the virus or the jobs that would be lost.

Some of Trump’s closest advisers argued for even tighter restrictions, including a complete halt of flights to the U.S. for 30 days, two of the people said.

National Security Advisor Robert O’Brien was among those who favored flight limits beyond Europe but didn’t support a total lockdown.

In the end, that idea of a full shutdown was abandoned as too extreme.

In the moments before the speech, a smaller group of aides spoke with Trump as he prepared to focus on the health urgency that underscored his travel decree. The group included Vice President Mike Pence, his daughter Ivanka Trump, his son-in-law Jared Kushner and Azar.

By the next morning, with markets plunging, Trump spoke with reporters about his address.

“I made a very tough decision last night,” Trump said. “And whether it affects the stock market or not. Very important. But it’s not important compared to life and death. So I had to make that decision and, frankly, the people that are professionals praised the decision. And it’s something I had to do. I think you’ll see the end result is very good because of it.”

As of Thursday afternoon, there were more than 1,300 cases in at least 46 states.