The initial public offering (IPO) boom which flooded the ASX with new listings in the lead up to Christmas is expected to resume in the New Year, as float managers line up investor briefings for the end of January.

Sharemarket floats traditionally go on hold until April at the earliest while investors digest the February earnings season reports. However, Max Cunningham, the ASX executive general manager of listings, said IPOs are likely to start flowing in much earlier than usual.

"We haven't ever seen an IPO market where it has taken a pause and then resumed, in terms of marketing deals, (this quickly) probably just after Australia Day," he said. 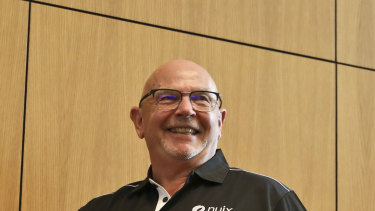 Nuix CEO Rod Vawdrey rung in the company’s stock market debut this year which was a gamechanger for tech stocks, according to the ASX. Credit:Ben Rushton

"We certainly have a very strong sense that the roadshows will be resuming in late January, and the IPOs might be actually launching on market as soon as late February."

"So that would be unprecedented and we have really not seen that before at all, certainly for sizeable transactions," he said.

EY Partner Duncan Hogg also expects the listings boom to continue into 2021. He pointed to low interest rates driving a global float frenzy but also very strong returns for local investors from IPOs which crowded the second half of this year.

The push for IPOs has been a global phenomenon, with US investors particularly active during the pandemic.

"The US has had their biggest IPO activity for the last 10 years, in terms of the number of IPOs. So it's sort of a global trend that we're seeing. And our expectation is that's going to continue into the New Year," Mr Hogg said.

The other significant factor, according to Mr Cunningham, has been the rising appetite in the market for technology stocks, as investors change the way they view and value the sector.

"We've seen a massive growth in tech IPOs and demand for that is not dropping away," he said.

"Nuix was a game-changer because it was the first major tech IPO where we saw all segments of the funds management community, including the large cap fund managers participate. Previously there've been the small and mid cap fund managers domain predominantly."

And it is not just Australian technology companies that are driving the growth in IPOs. New Zealand companies had one of their best years for ASX listings – including a number of tech listings – and this is expected to continue into 2021.

While the ASX cannot divulge details of its list of potential floats in the New Year, Mr Cunningham did highlight a top five list being lined up by investment banks comprising three tech groups, one miner with a valuation currently around the $750 million market and a retailer.

He said there are also some US tech companies in the $500 million to a billion dollar range that are also being prepared for listing by brokers.

EY's Mr Hogg said there is nothing on the horizon that looks like it could stop this boom.

Known risk factors include bad news on the pandemic front or with the vaccines under development.

There might also be a closing of the IPO window driven by underperforming floats like this year's Dalrymple Bay, "or alternatively just another black swan event, like COVID, that we just don't see coming," Mr Hogg said.