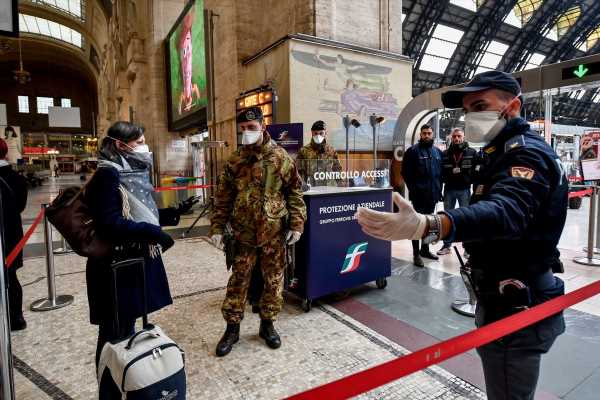 Italy will attempt to extend a lockdown throughout the country, even as questions linger about the enforceability of recent measures put in place to limit the spread of the coronavirus.

“We need to change our habits right now,” Prime Minister Giuseppe Conte said at an unscheduled news conference Monday evening. “We are forced to impose sacrifices” on the entire country, the premier, said adding that the measures will be dubbed “I’m staying home.”

Less than 48 hours after announcing far-reaching measures to control the spread of the virus in the region around Milan, Conte is now moving to widen restrictions by decree across the whole country, even as some of the initiatives in the north have appeared to yield limited results, with trains and airports still operating and many Italians continuing to move around freely.

Soldiers and police officers only began conducting checks at airports and train stations on Monday.

Schools and universities will be closed nationwide, all public events will be canceled and Italians won’t be allowed to travel without a business or health-related justification until April 3, the premier said.

The outbreak is testing the limits of the country’s health system and is a body blow for an economy already on the brink of recession. The crisis is also straining the authority of Conte, a political rookie leading an unstable coalition.

Italy’s Finance Ministry said Monday that the country is better off taking a short-term economic hit now to prevent a wider economic crisis.

The government moved on Thursday to double emergency spending to 7.5 billion euros ($8.5 billion) to help cushion the economic impact of the virus. That figure will rise even further, la Repubblica reported Monday, citing an interview with Conte.