The Murdoch family’s US focused media business Fox Corporation is suing the owner of prominent wagering brands Betfair and Sportsbet in a dispute over the fast growing fantasy sports and betting website FanDuel. 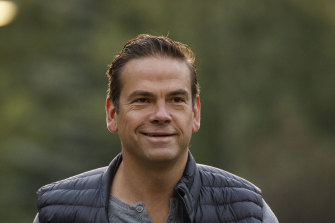 Under Lachlan Murdoch, Fox in the US has pushed heavily into betting.Credit:Bloomberg

In a case filed with New York’s Judicial Arbitration and Mediation Services, Fox Corp argues it should be able to buy an 18.6 per cent stake in the unlisted FanDuel at an US$11.2 ($14.6) billion valuation – the same price at which Flutter upped its take in the business in December.

Flutter disagrees and says Fox should pay a market price to increase its stake in the business which offers fantasy sports and horse betting products. FanDuel has been linked with a sharemarket float in the US.

Fox Corp obtained the option to lift its stake in FanDuel as part of Flutter’s £10bn ($18 billion) merger with The Stars Group, which jointly runs Fox Corp’s sports betting platform FoxBet. Fox Corp has a 2.6 per cent stake in Flutter. A Fox Corp spokesperson confirmed the lawsuit had been filed.

Mr Murdoch’s aggressive push into sports betting has underpinned to a sharp increase in Fox Corp shares, pushing its market value comfortably above $US20 billion ($26 billion). Last month, this masthead reported that Fox Corp has worked with other investors on a potential bid for parts of ASX-listed gaming operator Tabcorp.

Fox Corp, which owns the controversial US pay TV channel Fox News and the Fox free-to-air broadcast network, was the first major media company that tried to directly profit from a US Supreme Court ruling that effectively legalised sports betting in the US.

If the fight over Fan Duel is not resolved, it could result in Fox Bet making a more aggressive push into wagering and would pit the two companies as rivals as opposed to affiliates.

Fox Corp registered a trademark for its betting arm in Australia last October, in what was considered a clear sign of the company’s intentions in the local market.

Industry sources who spoke on the condition of anonymity because talks are confidential previously said Mr Murdoch was weighing up potential partnerships with local gaming companies or working with a consortium on a potential deal for Tabcorp’s bookmaking and media division.