London: Australian businessman Lex Greensill has issued a grovelling apology after being hauled before the British parliament but has blamed the collapse of his business on insurers.

Mr Greensill, who has refused to answer media questions about the collapse of Greensill Capital in March and has been holed up in his mansion in England’s north, made his first public comments on the matter during his appearance to the Commons Treasury committee in the early hours of Wednesday morning AEST. 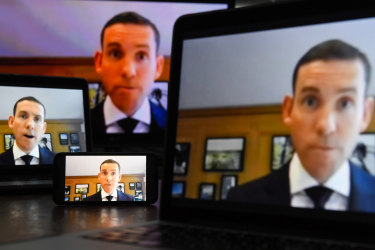 Lex Greensill appears before the UK parliament’s treasury committee from his home in Cheshire on Wednesday (AEST).Credit:Bloomberg

He faced a hostile grilling by MPs who accused him of being a “fraudster,” operating a “Ponzi scheme” and “gaslighting” taxpayers.

His appearance came as Britain’s regulator Financial Conduct Authority confirmed to MPs that it is investigating Greensill Capital, following a number of “potentially criminal” claims made in the media, about Greensill’s collapse.

Appearing via video link, the Queenslander said he was “desperately saddened” by the job losses and bore “full responsibility.” He said he had made a mistake in relying too heavily on a single insurer – Tokio Marine’s Australian subsidiary.

“It is deeply regrettable that we were let down by our leading insurer whose actions ensured Greensill’s collapse,” he said.

“To all of those affected by this, I am truly sorry,” he said in a short introductory statement.

Under questioning by committee chair, Conservative MP Mel Stride, Greensill said it was the “withdrawal of insurance capacity which resulted in our failure.”

“Our principal insurance provider decided not to renew their insurance despite being in discussions around renewing their insurance up to the hours before, ultimately, Credit Suisse determined they would no longer fund our business,” he said.

Greensill Capital sold supply chain financing, which allows suppliers to big companies to be paid earlier for a fee. It packaged up debts bought from big companies then onsold these financial arrangements to investors directly through its bank and via funds managed by Credit Suisse.

Labour MP Rushanara Ali accused Greensill of “gaslighting” the committee and operating a “Ponzi scheme,” likening him to the American fraudster Bernie Madoff.

Asked by Labour MP Siobhan McDonagh “Mr Greensill, are you a fraudster?” Greensill replied: “No I am not.”

He insisted that British taxpayers had incurred no direct loss as a result of his company’s collapse although did say he had unpaid council bills stemming from his office spaces.

The Australian said he was first concerned about the future of his company in December when the German regulator called for it to reduce its exposure to one of its clients, which he said was “impossible” to comply with.

He was questioned about his relationship with Sanjeev Gupta whom he first met in 2015. Their business relationship increased over time to become Greensill’s largest client at the time of the lender’s collapse in March, threatening Gupta’s steelworks in Australia and Britain.

Greensill said he was ordered by administrators who have taken control of his firm not to speak about the business relationship, although did confirm that he did have a “concentration on a certain customer that was too high.”

“I am responsible for that,” he said. Later, he told MPs that an unnamed company, that was not Gupta’s was actually his largest client.

The scandal has dragged David Cameron into the spotlight with the former British Prime Minister’s texts, WhatsApp and email messages to British ministers lobbying on behalf of Greensill released to the public.

Mr Cameron was attempting to secure Greensill access to a Bank of England (BoE)-backed finance scheme to prop up businesses during the coronavirus pandemic shutdowns.

“Can I give you lunch once the budget is done? Love Dc.” Mr Cameron wrote to Treasury civil servant Tom Scholar, requesting the number of the BoE’s deputy governor of the Bank of England.

When Mr Cameron’s entreaties failed, he then began texting and calling Chancellor of the Exchequer Rishi Sunak and the de facto deputy prime minister Michael Gove, with whom he fell out after the bruising Brexit referendum.

Mr Cameron will front the same inquiry on Thursday. Greensill had a privately arranged job in Number 10 when Mr Cameron was prime minister. The Australian was later awarded an honour which he received from Prince Charles.