A new ad for President Donald Trump’s campaign is facing criticism for using the image of a grieving Joe Biden to label the Democratic presidential candidate “weak.”

The ad also blasted Biden for some of his immigration policies, including his plan to increase refugee resettlement in the U.S.

Biden plans to boost refugee numbers “by 700% from the most unstable, vulnerable, dangerous parts of the world,” the ad claimed.

Trump last year approved a plan to dramatically reduce the number of refugees allowed into the U.S. in 2020 to 18,000, a move sharply criticized by religious and humanitarian groups. Biden vowed to increase the country’s annual global refugee target to 125,000 in recognition of the nation’s humanitarian traditions and ideals.

The Trump ad continued, “America can’t afford a weak Joe Biden,” over an image of Biden with his hand on his forehead.

Getty photographer Justin Sullivan captured the image at an event in Iowa in the summer of 2019. Biden appeared to get emotional — and brought his hand to his forehead as he attempted to regain his composure — while speaking about the challenges of long-term health care for ailing family members.

“If you need the help, I promise you, there is nobody, nobody, nobody, nobody more important to you than that person where they’ll do anything from helping with a bedpan to when they get really scared, you know, hold their hands, you know?” Biden said, his voice breaking, as he spoke of the help that long-term health care workers provide to families.

“I apologize, no, I’m sorry,” he told the moderator. 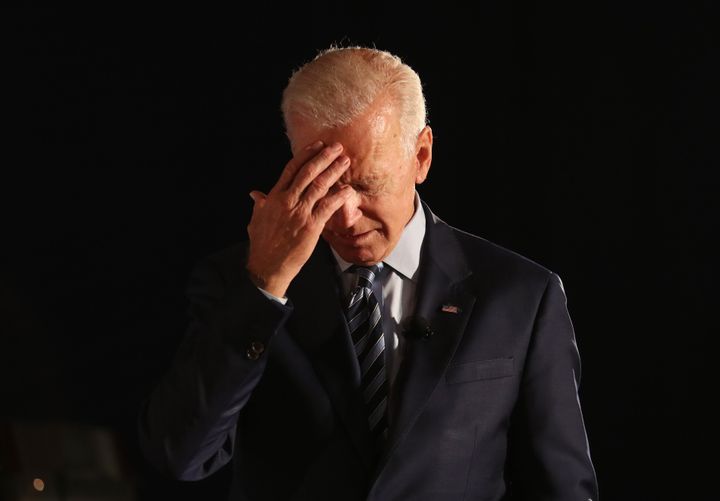 Biden has spoken extensively in the past of his own experiences with sick family members, including his elderly parents and his son, Beau, who died of brain cancer in 2015.

A Biden spokesman criticized the Trump campaign for mocking the former vice president during a moment of grief and vulnerability.

“Even by Donald Trump’s standards, this is appalling,” Michael Gwin, deputy rapid response director for the Biden campaign, told HuffPost in a statement. “Each day, Trump and his campaign manage to find new lows and further confirm in the eyes of the American people just how incapable he is of unifying our country and leading it with the honor and dignity it deserves.”

This isn’t the first time that Trump cast Biden as a so-called “weak” leader.

Trump on Monday tweeted about “Weak, Tired and Sleepy” Biden. In 2018, after Biden announced that he would have “beat the hell out of” Trump in high school over his mistreatment of women, Trump referred to him as “crazy” and “both mentally and physically” weak.