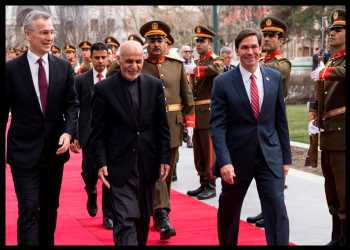 Afghan President Ashraf Ghani has denied a key clause of a joint declaration he signed with the United States and the Taliban at the weekend.

Under an agreement signed in Qatar’s capital Doha on Saturday, the Afghan government would release 5,000 Taliban militants in exchange for up to 1,000 government officials who are in the custody of the terrorist outfit. A March 10 deadline was set for the prisoner swap.

But Ghani later said his government has not promised to free Taliban prisoners, but it can be considered as part of the peace talks.

Under the declaration, the Taliban have agreed to counterterrorism guarantees, Afghan-to-Afghan negotiations, a ceasefire and condition-based withdrawal of foreign forces.

The leaders said any withdrawal would be conditions-based, and the Taliban would have to negotiate with Afghan officials for the process to move forward.

“Today’s release of the joint declaration between the Islamic Republic of Afghanistan and the United States marks a pivotal moment in the peace process,” Esper said during a ceremony at the Afghan palace.

The deal was signed after a week-long ceasefire in Afghanistan, which was encouraging, according to Esper.

But he made it clear that the Taliban “do not get a free pass”. He called on the Taliban to abide by their commitments as outlined in the agreement with the United States, to include maintaining the ongoing reduction in violence across the country. “As intra-Afghan negotiations progress, the United States will watch the Taliban’s actions closely to judge whether their efforts towards peace are in good faith,” he added.

“NATO allies and partners went into Afghanistan together. … When the time is right, we will leave together. This will only happen when we are sure that the Afghan forces no longer require our support, and that Afghanistan will never again become a platform for international terrorists.”

Esper noted that Afghanistan is a very different country from what it was in 2001. “It is no longer a safe haven for international terrorists.”