‘Normality is not yet on the horizon’: Virgin expected to slash capacity as shares, bonds sink

Ailing carrier Virgin Australia is expected to again slash capacity as it continues to come under pressure from the impact of strict travel restrictions imposed amid the coronavirus outbreak.

Investors dumped the debt-heavy airline's shares and bonds on Tuesday as aviation experts warned that many international airlines would be technically bankrupt by the end of May. 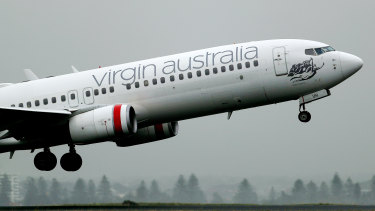 Virgin could take the drastic step of grounding its international fleet. Credit:Bloomberg

Sources said Virgin could take the drastic step of grounding its entire international fleet this week. It has already cut international and domestic capacity in response to a flood of cancellations from travellers.

Virgin's Australian listed bonds plunged 25 per cent to $35 as investors reacted severely to a ratings downgrade by Standard & Poor's on Monday. The bonds, which recovered slightly to close at $41.65, or 12.8 per cent lower were issued in November at $100. This fall was on top of a 22 per cent drop on Monday. Virgin's shares also fell 8.7 per cent to 6.3 cents.

Shares of rival carrier Qantas also fell 5.3 per cent to close at $2.86 as investors digested its decision to cut international capacity by 90 per cent and domestic capacity by 60 per cent.

The share and bond rout came despite senior federal government sources saying the government was considering a plan to waive more than $1 billion in levies imposed by Airservices Australia, saving Qantas $350 million and Virgin $180 million. However, airline industry sources said the levy cut could have a smaller benefit than hoped if the airlines were not as many flying planes.

Other governments are also taking action to keep the aviation afloat. US President Donald Trump flagged support for the airline industry on Twitter on Tuesday morning (Australia time), saying: The United States will be powerfully supporting those industries, like Airlines and others, that are particularly affected by the Chinese Virus. We will be stronger than ever before!"

Virgin has $5 billion in debt, but has $1 billion in cash on its balance sheet and no significant debt maturities until October 2021. Qantas' balance sheet is stronger but the airline relies more heavily on revenue from its international business than Virgin. Senior airline industry sources said Virgin was expected to seek support from its shareholders – China's HNA Group, Singapore Airlines, Etihad and Virgin.

Virgin on Tuesday slashed forward ticket prices on some domestic routes by as much as 35 per cent and released millions of free frequent flier points in an attempt to lure customers into booking travel later in the year once normal services resume.

The 10 million Velocity Points will be shares by people who buy an eligible Virgin Australia flight by March 23.

A source close to the company said the points offer was being used to stimulate demand and support the domestic flight sale it launched on Wednesday. Another company source said the airline's Treasury department was working furiously to shore up its finances.

While there are serious concerns about its ability to survive a massive drop in income over the coming months, Virgin has strongly refuted any suggestion it was talking to restructuring experts or insolvency advisors.

There are hopes the capacity cuts, while denting the income of both airlines, will also help reduce costs.

Industry experts at CAPA Centre for Aviation called on coordinated government and industry action to avoid what they described as a "catastrophe".

"By the end of May-2020, most airlines in the world will be bankrupt."

"As the impact of the coronavirus and multiple government travel reactions sweep through our world, many airlines have probably already been driven into technical bankruptcy, or are at least substantially in breach of debt covenants."

CAPA said forward bookings by travellers have been far outweighed by cancellations. "Demand is drying up in ways that are completely unprecedented. Normality is not yet on the horizon."

Already British Airways and US carrier Delta Air Lines are on the brink, while Norway's top airline Norwegian Air has temporarily laid off 90 per cent of its staff.