Data analytics group Nuix has confirmed that former chairman Tony Castagna still has a consulting role with the company but declined to respond to other allegations about its controversial float on the ASX last year.

A joint investigation by The Sydney Morning Herald, The Age and The Australian Financial Review this morning questioned the company’s governance and financial accounts in the years before it floated. Internal concerns over these matters triggered an attempted coup of Nuix chief executive Rod Vawdrey.

In a statement to the ASX on Monday morning, Nuix said its performance and market position was strong and it remains confident of its long-term prospects. It also said its financial forecasts had been thoroughly explained in its prospectus and subsequent statements to the market. 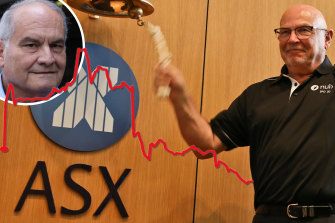 While not addressing the specific matters raised in the investigation, Nuix said: “The prospectus was the subject of a thorough due diligence process involving leading law firms, internationally recognised accounting firms and top tier financial and investment banking advisers.”

The initial public offering of Nuix last December was the highlight of a booming float market with the promise of growth justifying the high price investors paid for the stock.

However, within months of its debut, Nuix’s mid-year results cast doubt on its ability to meet its prospectus forecasts. The company confirmed in April that it would miss its revenue forecasts for the financial year.

“A larger number of customers than expected (including one of Nuix’s largest customers) had recently indicated their preference to switch from a module-based subscription licence to a more flexible consumption-based licensing model, and that whilst this is supportive of Nuix’s long-term growth prospects it does have a negative impact on short-term statutory revenues,” the company said of the downgrade.

In its statement on Monday Nuix also confirmed that co-founder and former chairman, Mr Castagna, has provided consulting assistance to the company.

He stepped down from the board to serve a four-year sentence for tax fraud and money laundering before his conviction was quashed and he was acquitted.

The data analytics company soared more than 50 per cent from its $5.31 IPO price on its sharemarket debut in December.

Macquarie Group was a big beneficiary. It cashed in $575 million worth of shares as part of the IPO and retained a 30 per cent stake in the business, which was worth as much as $855 million when the stock briefly soared to around $12.

Nuix shares dropped sharply lower on Monday morning, down 7.5 per cent to a low of $3.18.