NYC mayoral candidate Curtis Sliwa: CNN will ban me for saying Chris Cuomo must be fired 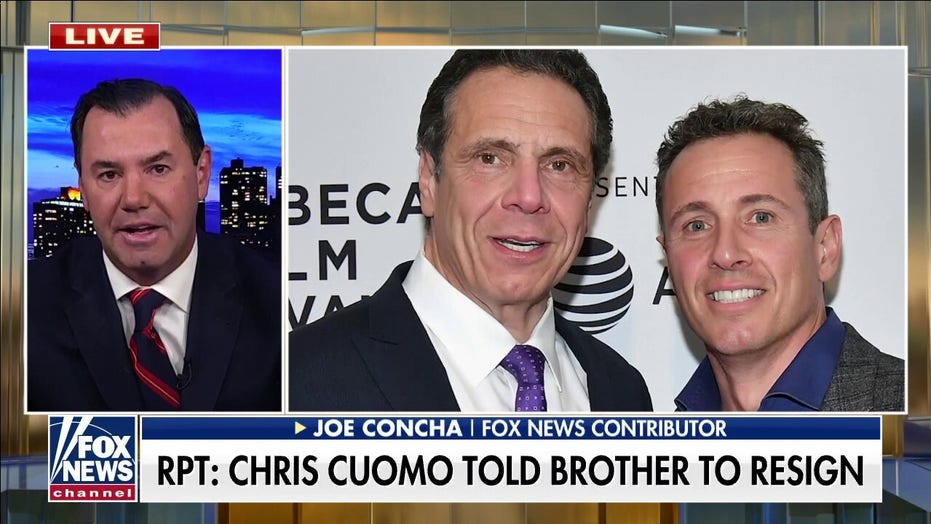 Concha: CNN has ‘no credibility,’ Chris Cuomo allowed to break every rule

A New York Times report says the CNN anchor regularly spoke with Gov. Andrew Cuomo over the past week and advised him to resign. Fox News contributor Joe Concha with reaction.

New York City Republican mayoral nominee Curtis Sliwa, who called for CNN to fire Chris Cuomo on Thursday, feels the network will retaliate by pretending he doesn’t exist with biased coverage of the upcoming election.

Sliwa urged CNN to fire Chris Cuomo for his role in a sexual harassment scandal that has forced his big brother, soon-to-be-former New York Gov. Andrew Cuomo, to announce he would step down. CNN’s “Cuomo Prime Time” host was part of a team of external advisors to his brother who contributed to a culture allowing the governor’s “sexually harassing conduct” to “flourish,” a scathing state investigation revealed last week. 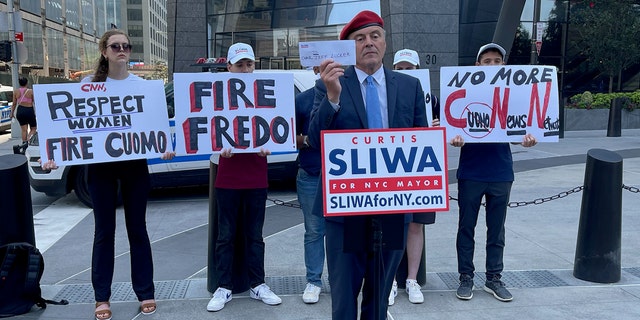 “It’s clear why others might not do what I did, because they don’t want to be perceived by the Cuomo News Network as a person of no consequence. The fate that I will suffer from this is that I will not even be a footnote in a story. I will not even be a mention. I will be banned in the lexicon of descriptions of the upcoming New York City mayoral race,” Sliwa said.

“The evidence is such that Chris became complicit. He was not just a brother, he was the wartime consiglieri. And for that, he’s implicated… he’s got to go,” Sliwa said Thursday following a press conference outside CNN’s headquarters.

Sliwa feels CNN will essentially crown his opponent, Democratic candidate Eric Adams, as the next New York City mayor after the he spoke out against the network’s most-watched host.

“I would not even show up in an entertainment segment of CNN. If I lit myself up on 10th Avenue and poured gasoline on myself and lit a match to myself, I still wouldn’t get a mention on CNN,” Sliwa said.

The GOP mayoral nominee is also concerned that CNN’s 9 p.m. ET host wouldn’t be able to fairly cover politics going forward because so many prominent figures came out against Cuomo’s older sibling. While Sliwa doesn’t think CNN will actually part ways with the scandal-plagued host, he doesn’t regret speaking out even if it means unfair coverage of his race for mayor.

“It’s more important that we clear the Cuomo flotsam and jetsam out of here in all ways and all shapes and all forms,” Sliwa said.

Following Thursday’s press conference, Sliwa delivered a letter addressed to CNN boss Jeff Zucker formally calling for the network to fire Cuomo. Sliwa told Fox News he was not able to directly hand it to the CNN honcho, but an underling met him in the lobby and ensured it would get to Zucker’s desk.

CNN has not publicly disciplined Chris Cuomo since the state report came out, but the network has banned the anchor from covering his brother. He is currently away from CNN on what is being labeled a “long-planned vacation” and refused to answer questions when confronted by Fox News earlier this week.