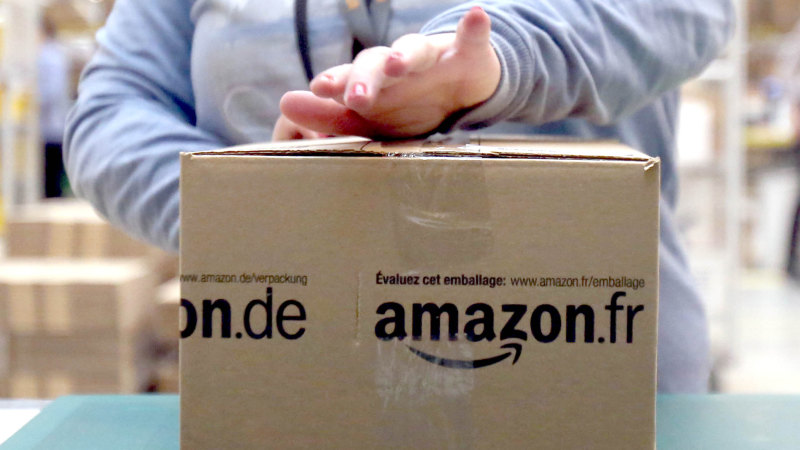 For the millions of people quarantined in the wake of the coronavirus, Amazon has become a lifeline. At the click of a mouse, Jeff Bezos's online superstore will deliver just about anything from fresh produce to tinned food, paracetamol and face masks.

Few companies play such a central role in the lives of so many ordinary people as Amazon does. From colossal fulfilment centres to lightning-fast couriers, the machinery behind the US tech behemoth has always operated at impressive speeds and efficiencies. Could that be about to change?

"Right now it's a fluid situation," says Dan Ives, an analyst at Wedbush Securities. "But given just how many of the packages are derived from China, and just given the complexity and logistics, there's a massive ripple effect [on the retail supply chain] from the coronavirus." 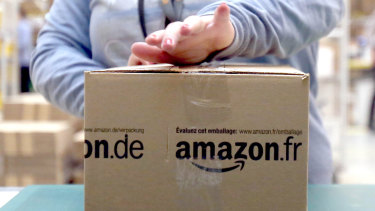 Could parcels in some way spread the virus?Credit:AP

It's inevitable this will affect Amazon. In many respects, the company is virtually a country in itself, employing over 653,000 people – more than the population of Iceland and the Bahamas combined – and with a market capitalisation of around $US970 billion ($1.47 trillion), larger than the GDP of most countries.

With distribution networks across 30 countries, selling 100 million items, many of the challenges facing our globalised economy in the wake of the disease are being played out at Amazon on a smaller scale.

Like the broader economy, Amazon is facing big difficulties on several fronts. It is battling to avoid chaos in its supply chain while attempting to contain coronavirus outbreaks among its own staff and to cope with an influx of fake products and price gouging.

"When you look at names that touch consumers on a daily basis it's hard to find ones that are above the likes of an Amazon or an Apple," Ives says. The company is "really the heart of the consumer ecommerce ecosystem globally".

Amazon has already taken steps to minimise the impact. It has reportedly stockpiled Chinese-made products and halted all non-essential travel for staff, despite the inevitable knock-on impact on the business. The decision to suspend staff travel came just days before two of Amazon's own employees in Italy were placed in quarantine, having tested positive for the disease. A member of its Seattle team has also contracted the virus.

"The risk of transmission for employees who were not in close contact with this individual is assessed to be low," Amazon told staff at the time. Nevertheless, the company has started to intensify its measures to control the spread of the virus, saying it is working closely with "public and private medical experts to ensure we are taking the right precautions to protect customers, employees and partners".

Those precautions are understood to include increasing the frequency and intensity of cleaning at all of its offices and warehouses, and asking staff to wash down working spaces.

In Seattle, employees have been allowed to work from home until the end of March. It is not just in Amazon's supply chain. Online, the company is racing to stem price gouging of products that can tackle the coronavirus, including antibacterial hand gels and masks. It has already deleted one million items from the site for falsely claiming they could defend against the virus, and tens of thousands for artificially hiking prices on "basic need products during a global health crisis".

Some sellers have reportedly jacked up the price of face masks by as much as five times over the past few weeks, prompting regulators to open an investigation into "insane prices" for such products.

But, for Amazon, it is not all bad news. And in some respects the online marketplace could even get a boost from the pandemic.

While the company condemns artificially hiking prices, a large part of its business ultimately lies in providing items to people's homes – something that is only going to become more important at a time when people are being advised to stay inside.

In Wuhan, China – the city at the heart of the coronavirus outbreak – delivery drivers were praised as heroes, the only way many of the city's 11 million residents were able to access the outside world.

As the virus now spreads across the globe, "internet companies with exposure to food delivery, ecommerce and streaming services could see an uptick in users as coronavirus fears keep consumers inside", analysts at UBS Global Wealth Management said. The "stay at home" nature of companies including Amazon "offer some shelter relative to the broader market", they said.

Internet companies with exposure to food delivery, ecommerce and streaming services could see an uptick in users as coronavirus fears keep consumers inside.

However, questions persist. As news of the latest employee infection spread across Twitter, users panicked about whether parcels could in some way be infected. Covid-19 is thought to be able to survive on a flat surface for almost a week unless it is disinfected, and could spread on to packages without someone having physically coughed on them.

According to the World Health Organisation, receiving packages remains safe. "The likelihood of an infected person contaminating commercial goods is low and the risk of catching the virus that causes Covid-19 from a package that has been moved, travelled and exposed to different conditions and temperature is also low," the group says.

However, "coughs can generate tens of thousands of infectious particles," explains William Keevil, a professor of environmental healthcare at the University of Southampton. "And you could cough directly on to a packet, but equally you could cough into your hands, not wash your hands and then touch the package."

If these packages are then delivered to homes, and people then touch their faces, their eyes, nose or mouth, then there is a risk they could become infected, he says.

A solution would be to decontaminate a parcel, but doing so presents an issue, given they cannot be washed or covered with gels.

"We believe this could be a problem," says Keevil. "You cannot wet packages and envelopes."

He last week submitted a proposal to the British government, in response to the coronavirus research call, on looking into decontamination of parcels and packages – something he said appeared not to have been thought about since the anthrax letter attacks in America.

The proposal would be for a "dry" contamination of products using plasma. They expect to hear back before the end of the month.

For now, steps have been taken to try to stem the spread of the disease. Amazon is understood to be requiring workers to wipe down their workstations and vans at the start and end of every shift with disinfectant or cleaning wipes.

Implementing this globally may be tricky – especially as many of those delivering the items are contract staff and do not work for Amazon. Not all such staff are thought to have been properly advised of this guidance.

One delivery driver, who works for Hermes, says they have received the "standard information about infection and how to watch for yourself", but added "there's nothing we can really do to protect ourselves".

Demand certainly looks set to rise for their services, and Amazon may be better placed to weather the pandemic than many companies.

Whether it can keep its huge machinery operating at its current pace, however, is another matter.