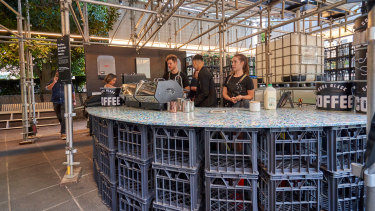 Created for coffee entrepreneur Joseph Haddat from Code Black, this temporary installation does not have the traditional hallmarks of architecture.

There are no solid walls and a security guard is required 24/7 to ensure the contents are protected while operating for Design Week.

“We’ve created a number of hospitality projects for Code Black."

"This one doesn’t come with the fixtures and fittings we regularly use,” says interior architect Hanna Richardson (who was raised in Germany and hence the name ZWEI), who works closely with co-director architect and interior designer Katherine Kemp.

The duo floated the idea of creating a cafe/installation to Haddat as part of Design Week, but one that was fully sustainable and could be easily put together and taken apart for the 10 days of the event.

Located at Freshwater Place, Southbank, directly in front of the Bates Smart apartment towers, ZWEI’s goal from the outset was to create ‘zero’ energy emissions.

The scaffolding, for example, was hired for this installation and will be returned after the event.

Likewise, the 118 solar panels used for the butterfly-shaped roof and wrapping around the upper walls, all connected to Tesla batteries, will also be returned to the supplier. 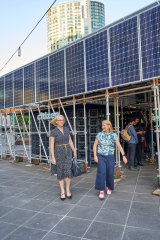 A gutter placed on the ridge of the roof collects storm water.

One thousand-litre-water tanks have also been included, including one used to collect storm water channelled from the roof.

The interior of this pop-up is also fairly rudimentary but far from ‘basic’.

There are approximately 500 black plastic milk crates for the walls and partitions, including a base for the benchtops made from recycled plastic found by the roadside.

“We borrowed these crates from Devonshire Milk, and as with all the other fixtures, they will be returned when everything is pulled apart,” says Kemp.

By hiring rather than buying fixtures and fitting, ZWEI has not only created a sustainable structure, but delivered a project approximately a third of the cost of a permanent structure of 100-square-metres (approximately $90,000 instead of $270,000).

Those purchasing coffee at this Code Black pop-up during Design Week can do so for the cost of a gold-coin donation, with the money going to The Climate Council, a research authority in Australia.

“The idea is that you bring your own cup or purchase one our recycled plastic cups,” says Kemp, who is also including the used coffee ground as part of the compost to fertilise the mushrooms being grown in recycled plastic tubes.

This isn’t the first sustainable project ZWEI has delivered.

As well as including many sustainable features in their hospitality projects, they have been instrumental in creating a sustainable design for the ACRE cafe at Burwood Brickworks.

“When you are looking at sustainable design, it’s paramount to look at delivering sustainable systems, as much as the materials selected,” says Kemp, using the case of purchasing a simple cup of coffee.

“You need to think about using byproducts from ingredients and also the way products such as cups are reused,” says Richardson.

“It’s about taking a holistic approach from the outset,” adds Kemp, pointing out the concrete brick pavers that form the floor of this installation.

“Why would you create a new layer to stand on when you already have the original fabric that extends along Southbank?” she adds.

Those visiting Citizen MDW at Freshwater Place will obviously enjoy the coffee.

However, they should also reflect on the design.

Even though it may not appear to be cutting edge, it celebrates one of the most important directions in design.