A group of Democrats led by Rep. Ayanna Pressley Wednesday ratcheted up the pressure on House Speaker Nancy Pelosi to strip Rep. Lauren Boebert of her committee assignments after offensive comments Boebert made about Muslim Congresswoman Ilhan Omar.

“It is shameful that we have had to wait this long for meaningful action, for meaningful accountability, but here we are,” Pressley, D-Mass., said. “Words have consequences. We must acknowledge that and respond with action.”

Pressley led a coalition of Democrats who introduced a resolution to remove Boebert, R-Colo., from her committee assignments Wednesday – the same punishment Democrats meted out to Reps. Marjorie Taylor Greene, R-Ga., and Paul Gosar, R-Ariz., recently for comments they made. Gosar was also censured. 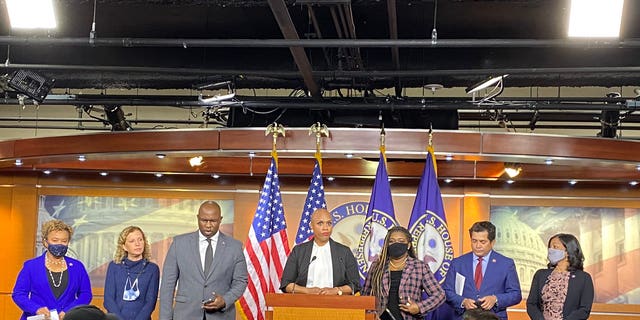 “We cannot normalize this rhetoric, this language, anti-Muslim hate, Islamophobia and racism, sexism and discrimination,” Rep. Jamaal Bowman, D-N.Y., said. “If leadership does not act accordingly, we are condoning that behavior, not just here in Congress, but we are sending the message across the country.”

“It’s hard being a Muslim in our country right now,” Rep. Rashida Tlaib, D-Mich., said, choking up during her remarks. “And this makes it worse.”

The comments come as Pelosi, D-Calif., and House Majority Leader Steny Hoyer, D-Md., declined this week to take a stance on whether Democrats should punish Boebert for comments attacking Omar over her religion, comments that were recently caught on video.

Hoyer Monday said that he had not spoken with fellow Democrats about whether they would pursue specific punishment against Boebert. Pelosi Wednesday slammed Republicans for not punishing Boebert on their own and said it’s up to them to publish Boebert, not Democrats.

“When I’m ready to announce that I’ll let you know,” she also said when asked about punishing Boebert. “It’s their responsibility to deal with their people.”

“I don’t want to get ahead of any ongoing discussion… but there are active discussions underway,” House Democratic Caucus Chairman Hakeem Jeffries, D-N.Y., said Wednesday.

It’s also not clear whether a measure to discipline Boebert would have the votes to pass – especially after two recent efforts to punish GOP members and as some Republicans say they may turn the tables on Democrats in 2023 if they continue to remove GOP members from committees. 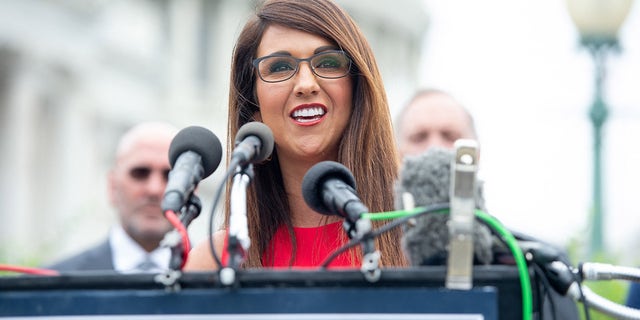 Rep. Lauren Boebert, R-Colo., alongside members of the House Freedom Caucus, during a press conference outside of the US Capitol in Washington, DC August 31, 2021. (Photo by SAUL LOEB / AFP) (Photo by SAUL LOEB/AFP via Getty Images)

Pressley ignored questions about whether she is making herself a target for Republicans to remove from her committees if they take the majority. Meanwhile, Rep. Alexandria Ocasio-Cortez, D-N.Y., said she’s had enough of waiting for Republicans.

“So many women will have their hijabs ripped off on public transit, because of the example that Leader McCarthy and Republican caucus is setting right now,” she said. “We have a responsibility to show this country that bigotry is unacceptable.”

Rep. Debbie Wasserman Schultz, D-Fla., also joined Pressley, Ocasio-Cortez, and other “Squad” members on stage. Her presence was notable after serious disagreements those members had before with Wasserman Schultz, who is a staunch defender of Israel. 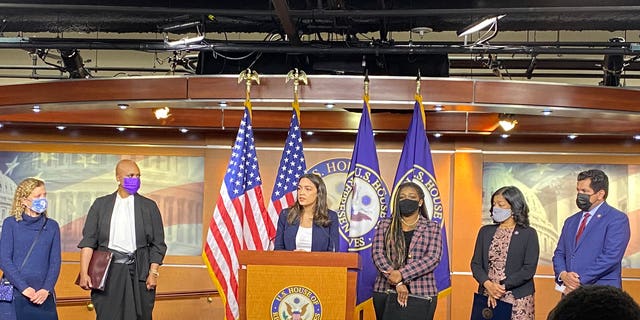 “Not on my watch,” Wasserman Schultz said. “I will never be in a situation where when someone comes for anyone that there will be no one left to speak for me because I did not speak up. That is a paraphrase of a poem that is on the walls of the United States Holocaust Museum.”

“I am aware that on Wednesday at 2pm in studio A, some people did something,” Boebert told Fox News when asked to respond to the presser. Pelosi’s office did not immediately reply to a request for comment.

It’s not clear when the House would vote on the resolution even if Pelosi supports it. The chamber could wrap up for the week Wednesday or Thursday, and then only return to Washington, D.C., to sync up with the Senate on Democrats’ reconciliation bill for the rest of the year.