Would Afterpay survive if 40 per cent of its customers defaulted? That's one of the scenarios investors are crunching the numbers on as queues of freshly unemployed people snake around Centrelink offices around the country.

The shares of Afterpay and rival buy now, pay later provider Flexigroup plunged more than 35 per cent at one stage on Monday. Afterpay hit an intraday low of $8.01, its lowest since 2018 as the rapidly deteriorating economic conditions focused investors' minds on how the new payment fad will fare in a recession.

Investment bank Citi said uncertainty regarding the extent of any decline in consumer spending, and whether Afterpay can sail through the bottom end of a credit cycle will be an overhang on the stock for the next three to six months. 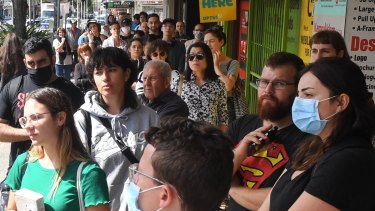 But Citi's stress testing indicates Afterpay can withstand a material impact to its cash flow even if net transaction losses more than triple from 0.5 per cent in the first half of this year to 1.8 per cent in the current half year, and sales on its platform do not increase.

"In our view, the quantum of decline in consumer spending is the key uncontrollable factor from Afterpay's perspective," it said.

Citi says that unlike other unsecured consumer lenders Afterpay can dynamically change its credit variables on a per order basis and its loan duration is just 30 days which means it can identify credit risks early and control losses.

Afterpay investor ECP Asset Management published a report saying it has modelled a scenario where 40 per cent of Afterpay's existing customers default by year's end and the Sydney fund manager is confident the tech finance stock can survive.

"A ‘bad scenario’ year which sees 40 per cent of existing customers default in a five-month window results in a total (negative) return of minus 30 per cent on the receivables invested capital," said ECP's Damon Callaghan.

"If we assume one ‘bad year’ for every seven, Afterpay’s receivables book stands to generate in excess of 20 per cent return on capital for a full cycle," he said.

According to Ophir Asset Management, the online component of Afterpay's business is a silver lining for the stock and the fund manager contends that a dash to safety might also explain the share price dives.

"With ultra-low interest rates on offer, going to cash is less attractive now than in the GFC so some investors are likely seeking protection in more defensive names."