Qantas has landed a windfall of $802 million selling a sizeable chunk of prime land at Mascot near Sydney Airport to a consortium led by logistics property giant LOGOS and the country’s largest super fund, Australian Super.

The national airline will lease back portions of the 13.8 hectares of land, and channel the proceeds of the deal towards paying down debt its has accumulated as the global pandemic decimated travel demand.

The buyers’ consortium, which also includes Abu Dhabi Investment Authority, will work with Qantas to look at potential development options for the sites. That includes the creation of a dedicated precinct for the airline, as well as the sale of an additional 3 hectares of land that adjoins some lots being sold. 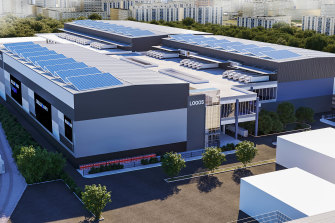 Artist impression of the development of the 14 hectares Qantas land at Mascot that it sold for $802 million.

Settlement of the vast majority of the lots is expected by the end of December, with the funds to be used to reduce debt and accelerate the airline’s recovery. Qantas has owned the land since the 1960s and decided to sell it after a recent property review, which confirmed its headquarters would remain in Sydney.

The highly anticipated deal will see the development of state-of-the-art distribution centres to service the boom in the logistics sector in proximity to air freight. But there are height restrictions for buildings near the airport.

Qantas chief executive Alan Joyce said the airline had gone into the property review open-minded about whether it would sell some, all, or none of the land, depending on the market response.

‘The strength of this sale and its impact on our balance sheet means we can get back to investing in core parts of our business sooner.’

“That response was extremely strong, and it has resulted in the sale of all the land,” he said. “We’ll use these funds to help pay down debt that we’ve built up during the pandemic. The strength of this sale and its impact on our balance sheet means we can get back to investing in core parts of our business sooner.”

“The site is a key freight gateway for the airport and offers unparalleled connectivity as a critical link to supply chains around the country,” Mr Searle said.

The acquisition follows the announcement in July of AustralianSuper’s acquisition of a 40 per cent interest, worth $774 million, in $1.67 billion Moorebank Logistics Park alongside LOGOS, and the 2019 acquisition of the Wiri Estate development in New Zealand which is also being managed by LOGOS.

AustralianSuper head of property Bevan Towning said the buyers’ consortium has a long-term redevelopment plan for the site that will transform it into a key logistics hub for customers seeking strategically located logistics facilities.

“This is a great opportunity for AustralianSuper to access an asset with significant growth potential over many years. Opportunities of this size and scale in such sought-after locations are rare,” Mr Towning said.

“As a large fund with a long-term focus, we are attracted to opportunities where we can deploy capital and use our investment expertise over several years to create large-scale projects that will contribute positively to member retirement balances.”

Gavin Bishop, Colliers head of industrial capital markets, Australia, said the local industrial and logistics market completed its best year on record in the year to June 2021, providing a total return of 23.2 per cent over the period.

“This performance surpassed the previous record setback in late 1988, where the total return measured 23.1 per cent. The sector continues to surpass expectations, and the performance spread over the retail and office sectors is at record highs,” Mr Bishop said.