Australia's two key airlines Qantas and Virgin Australia are reeling from strict new travel restrictions to tackle the spread of the coronavirus that are likely to severely hamper international flight arrivals.

Prime Minister Scott Morrison announced on Sunday that all travellers arriving from overseas will have to self-isolate for 14 days after arriving in Australia. 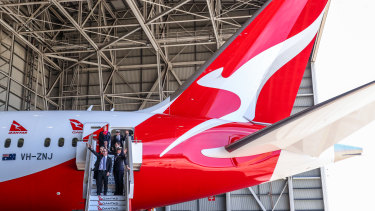 The flying kangaroo hasn’t been grounded by coronavirus… yet.

The two carriers were left scrambling on Sunday after the announcement that sources said caught the airlines off guard due to its severity.

The new policy is expected to spark a flood of cancellations on flights by international travellers and have an impact on the finances of both groups, but particularly Virgin which has been struggling in recent months with a debt heavy balance sheet and a share price languishing below 10 cents.

The entire aviation sector has been hammered by the spread of the virus, with British Airways boss Alex Cruz warning the airline faced a battle for survival.

To help consumers, Virgin, Qantas and Jetstar all varied their cancellation and deferral policies on Sunday, to help customers who wish to change their travel plans after the announcement.

"Qantas and Jetstar have introduced greater flexibility for customers wishing to change their travel plans, following increased travel restrictions being implemented by various governments around the world due to the evolving Coronavirus situation," the company said in a statement.

These changes apply to all domestic and international flights for Qantas, QantasLink and Jetstar.

Virgin has also varied its cancellation policy and will waive change fees on domestic and international books for travel between March 15 and June 30.

"We are aware of new travel restrictions announced by the Australian Government and are assessing our response," a Virgin Australia spokesman said.

"We understand these restrictions may affect our guests’ travel plans and are working on how we can best support them."

Both Virgin and Qantas have cut capacity in the past week to respond to the downturn in the aviation sector caused by the COVID19.

Further capacity cuts are expected for both airlines as an interim measure, sources said. Qantas and Virgin didn't respond to questions about whether they would seek to be suspended from trading on the ASX until more information about the impact of the virus on their businesses was available.

Five inexpensive renovations to ‘inject new life’ into your bathroom