Australia’s downtrodden listed travel sector has received a shot in the arm courtesy of a $1.2 billion federal support scheme that drove major beneficiary Qantas’ share price to a four-month high on Thursday.

Qantas said the scheme to stimulate domestic travel demand with 800,000 half-price airfares would get more of its planes back in the sky faster. The airline has already set an ambitious target to be at 80 per capacity by mid-year on hopes the vaccine rollout will end state border closures. 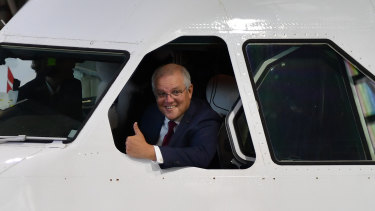 Prime Minister Scott Morrison leaning out of a Qantas plane on Thursday ahead of announcing the $1.2 billion industry package. Credit:Dean Lewins/AAP

The airline’s share price – which tanked 64 per cent when the COVID-19 pandemic brought global air travel to a halt a year ago – closed 2.5 per cent higher at $5.30 on Thursday. It is the highest they have traded since December when the Sydney northern beaches COVID-19 outbreak set its recovery back by three months.

The rocketing Flight Centre share price came despite managing director Graham Turner saying the support package would not help his business because the airlines would sell the discount tickets directly, and doubted it would significantly help the industry recover.

“I don’t think that [the package] will make much difference,” Mr Turner said in an interview. “It’ll help a few communities but it won’t be that significant itself.”

Bell Direct analysts Jessica Amir said travel sector stocks had already been bullish as domestic travel continued to build up and the support package was the icing on the cake. “It’s a nice little kicker – but they’re still a long way from their fall from grace,” she said.

Novus Capital adviser Gary Glover said the market now had more certainty about the vaccine’s effectiveness and rollout timetable, and so could look forward to the industry showing a meaningful recovery in earnings.

“Everyone knows we’re going to come out the other end, the question is how long,” Mr Glover said. “It looks like there’s an end to the agony – the clouds are starting to clear.”

ASX-listed Country airline Regional Express’ deputy chairman John Sharp dubbed the government package “QantasKeeper” and said the choice of destinations made no sense if it was supposed up to prop-up the tourism industry.

For instance, Qantas’ flights from Melbourne to Merimbula – the only destination in NSW included in the scheme – were eligible for the discounts but Rex’s flights on the far busier route from Sydney would not.

“It’s a nice little kicker – but they’re still a long way from their fall from grace.”

“If the idea is to bring tourists to Merimbula to boost the local economy, why wouldn’t you connect Sydney to it?,” Mr Sharp said.

Around 9000 Qantas employees and about 1000 Virgin employees remain stood down, with most international pilots and crew not expected to have any meaningful work until at least October.

The federal package also includes payments for 8600 international Qantas and Virgin airline crew who are expected to remain without work until at least November due to the international border closure. Qantas told staff in an internal email that details of this package were “to be finalised shortly”.

That leaves a shortfall of at least a thousand domestic crew who will no longer receive JobKeeper payments and remain stood down from work while the airlines gradually ramp up capacity.