Republican counties have higher home construction rates than Democratic ones

Lack of regulations may be causing red counties to perform better than blue counties when it comes to home construction, according to the National Association of Homebuilders (NAHB).

“Red counties seemed to have policies in place that want to give people the opportunity to move into a home and start the American Dream of homeownership off,” NAHB CEO Jerry Howard told FOX Business’ Stuart Varney on Thursday.

HOW TO BUY A HOME WITHOUT A MORTGAGE

The NAHB defines “red counties” as those in which a majority of the population voted for President Trump in the 2016 presidential election, while “blue counties” are described as those who voted for Hillary Clinton. The data showed that the population of the country was almost equally split between counties in red (49 percent) and blue (51 percent).

Sixty-one percent of single-family home construction occurred in red counties, while nearly two-thirds of multifamily construction took place in blue counties, according to data from the fourth quarter of 2019. 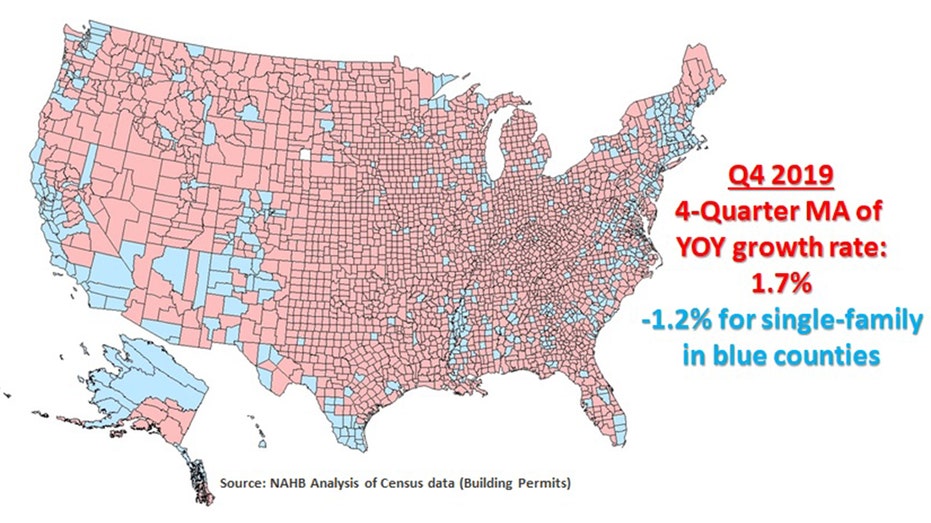 “It's hard not to draw the conclusions,” Howard added.

Additionally, the data showed that red counties posted growth rates of 1.7 percent for single-family home building, while blue counties declined 1.2 percent over the course of 2019.