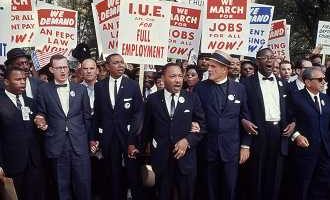 Remembering Martin Luther King Jr. with 15 of His Most Powerful Quotes “We must learn to live together as brothers or perish together as fools.”
– from his Dec. 18, 1963, speech at Western Michigan Universty “We must accept finite disappointment, but never lose infinite hope.”
– from In My Own Words, a collection of King’s sermons, speeches and writings selected by his widow Coretta Scott King “We must use time creatively, in the knowledge that the time is always ripe to do right.”
– in a letter from Birmingham Jail, April 16, 1963 “The beauty of genuine brotherhood and peace is more precious than diamonds or silver or gold.”
– from his Nobel Peace Prize acceptance speech in Oslo, Norway, on Dec. 10, 1964 “Let us be dissatisfied until integration is not seen as a problem but as an opportunity to participate in the beauty of diversity.”
– during a speech at the Southern Christian Leadership Conference, Aug. 16, 1967 in Atlanta, Georgia “I have a dream that my four little children will one day live in a nation where they will not be judged by the color of their skin but by the content of their character.”
– during King’s “I Have a Dream Speech” on Aug. 28, 1963, at the Lincoln Memorial in Washington, D.C. “I must confess, my friends, the road ahead will not always be smooth. There will be still rocky places of frustration and meandering points of bewilderment. There will be inevitable setbacks here and there. There will be those moments when the buoyancy of hope will be transformed into the fatigue of despair. Our dreams will sometimes be shattered and our ethereal hopes blasted. We may again with tear-drenched eyes have to stand before the bier of some courageous civil rights worker whose life will be snuffed out by the dastardly acts of bloodthirsty mobs. Difficult and painful as it is, we must walk on in the days ahead with an audacious faith in the future.”
– from his speech at the Southern Christian Leadership Conference, Aug. 16, 1967 in Atlanta, Georgia “In the process of gaining our rightful place we must not be guilty of wrongful deeds. Let us not seek to satisfy our thirst for freedom by drinking from the cup of bitterness and hatred.”
– during his “I Have a Dream Speech” on Aug. 28, 1963 at the Lincoln Memorial in Washington, D.C. “Injustice anywhere is a threat to justice everywhere.”
– in a letter from Birmingham Jail, April 16, 1963 “What is needed is a realization that power without love is reckless and abusive, and that love without power is sentimental and anemic. Power at its best is love implementing the demands of justice, and justice at its best is love correcting everything that stands against love.”
– from a speech at the Southern Christian Leadership Conference, Aug. 16, 1967 in Atlanta, Georgia “The ultimate measure of a man is not where he stands in moments of comfort and convenience, but where he stands at times of challenge and controversy.”
– from King’s 1963 book Strength to Love