Retail fight: who body blocks the unvaccinated from coming through the shop door?

Just who will draw the short straw on policing the line between the vaxxed and the unvaxxed when states open is emerging as the decade’s vexed demarcation dispute.

But the countdown is on, with only 11 days before NSW citizens will be herded into two vaccination categories. The only thing we can be sure about is that security guards will be in such hot demand they should be able to name their price.

So hot is this potato that no one wants to hold it – least of all the NSW government which mandated that until December businesses that deal with the public will need to ensure only fully vaccinated staff and patrons can pass through the front door. 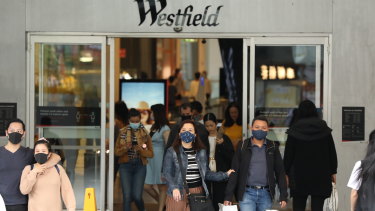 Shoppers will need to be vaccinated to be allowed in malls.Credit:Dominic Lorrimer

In refusing to deal with the kryptonite-like issue of mandating vaccines more generally, the state government has thrown this hospital pass to the business owners.

Billionaire retailer Solomon Lew has become the unlikely defacto advocate for the retail industry with his campaign to apply pressure on the big shopping centre owners to enforce keeping the health “ineligibles” outside the malls – and negate the need for the shops inside to check QR codes including vax status, and potentially refuse entry to some shoppers.

But the large mall owners argue their tenants include essential suppliers such as supermarkets and chemists who are open to the unvaccinated, so they cannot refuse shopping centre entry to anyone based on inoculation status. They argue that once unvaccinated shoppers are inside a centre it would be difficult to herd them away from visiting other areas of the mall.

Having security guards stationed outside every retail store within a shopping mall for months will be an expensive exercise, particularly for smaller businesses.

Lew is suggesting the cost be shared between mall landlords and tenants. He is also looking to the government to issue clear guidelines on mandatory check-in, vaccination passport checks and temperature checks.

But posting sales staff at the door is potentially dangerous if those refused entry become aggressive. 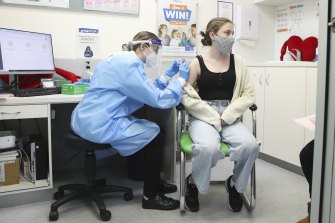 The price of admission.

While it might seem unlikely that any unvaccinated patron would die in a ditch over being turned away from Smiggle or Dotti, the same may not be said for a bunch of unvaccinated people looking to enter a pub on a Friday night.

And understandably some businesses won’t want to alienate customers who don’t comply.

This explains why one restaurant owner with a fleet of 30 outlets, Rami Ykmour, has decided to keep his business closed until December when restrictions for entry will disappear under NSW’s re-opening roadmap.

“You get into the hospitality business to welcome people, not turn people away. This will cost me millions of dollars but I just have to be true to who I am,” he said on Wednesday.

Once NSW has reached its 90 per cent fully vaccinated milestone, all consumer-facing businesses will be confronted with a new dilemma – whether to continue mandating customers and staff be fully vaccinated.

There are few businesses that have crossed the rubicon on this issue – fruit canning operator SPC, Telstra and the airlines are among those that have.

Businesses such as retailers, pubs, hairdressers and restaurants will need to decide whether the vaccinated majority would feel comfortable mingling with unvaccinated customers and whether marketing their outlets as COVID safe would be better for business.

Employers will also need to take into account the health and safety of their staff. Some, like Qantas and Virgin, have already made that decision. Only fully vaccinated travellers will be able to fly and the same will apply to staff – other than those eligible for medical exemptions.

Come December other large employers whose staff are customer-facing or who work in a shared office environment will be forced to make a decision around mandatory vaccinations.