The head of Premier Investments has accused Australia's landlords of "playing roulette" with the lives of shoppers, alleging Westfield owner Scentre took no action after Premier's staff were exposed to coronavirus-positive customers.

In a deepening of the longstanding stoush between the retailer's billionaire chairman Solomon Lew and landlords, chief executive Mark McInnes said the company had two incidents at Scentre's Carindale mall in Queensland where employees were exposed to the virus. 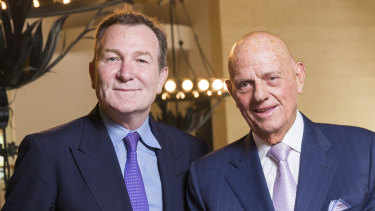 "We were made aware of these incidents by the affected customers themselves and the Queensland Health Department. We then notified Scentre, who to our knowledge took no steps to notify the other tenants, customers or the community of Carindale that positive COVID-19 cases had been shopping in the mall," Mr McInnes alleged.

"COVID-19 is a deadly virus and it is unacceptable for landlords to play roulette with the lives of retail employees and customers by not doing everything they can to protect them."

Other retailers, including Mosaic Brands, Adairs, Lovisa and Accent Group, followed suit, also saying they would also not pay rent during the shutdown.

In response, landlords said Premier's action was "premature" and the company had a "legal obligation to pay rent". John Gandel, who owns half of Australia's largest mall Chadstone alongside major landlord Vicinity, told The Australian Financial Review businesses needed to “work together”.

"Most of the landlords are trying to help and to accommodate people where necessary. Everybody has their own obligations, it's not just the tenant. It's a circular thing," he said.

In response, Mr McInnes today challenged landlords over their commitment to "Team Australia", asking them why shopping centres continued to trade, and what occupational health and safety measures malls had put in place to ensure the safety of retail employees. 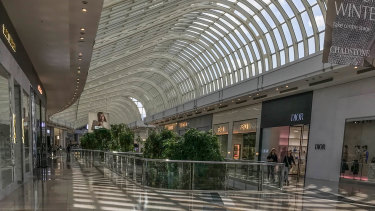 The coronavirus is keeping people away from Chadstone.Credit:Joe Armao

He also questioned what levels of financial assistance had been provided to retail tenants in order to keep jobs secure and if all cases of coronavirus-positive shoppers had been reported to tenants.

"The answers to these questions will determine whether any retail landlord has the right to talk about Team Australia," Mr McInnes said.

The peak body for Australia's landlords, the Shopping Centre Council of Australia (SCCA), said it had received direct feedback about some landlords who were not "engaging with the empathy" required during these times, although it didn’t specify which companies.

"This is surprising, and if correct, very disappointing and frustrating to hear," the SCCA said. Scentre and Vicinity are both members of the industry group.

SCCA's members have agreed to make sure there are no lease terminations for non-payment of rent for small to medium-sized businesses as a result of the pandemic.

"It is vital that our industry, as a key part of the economy and our local communities, work collaboratively with government and our SME retailers to support their cash flow and jobs across the economy," it said.