Return to Oz: Australian bankers swap Wall Street for the beach in wake of pandemic

On Wall Street, it might sound like a 15,979 kilometre ticket to nowhere. And yet here was Catherine McCormack, trading a plum job at Goldman Sachs in New York for a finance job back home – in Australia.

That might seem like a career-killer, but McCormack, 39, says the pros outweigh the cons in a world still crippled by the lasting impact of the pandemic. 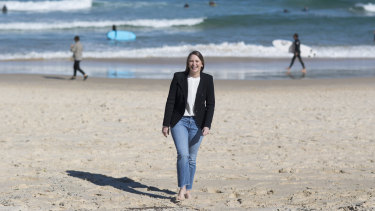 Former Goldman Sachs executive Catherine McCormack has returned to Australia after more than a decade on Wall Street. Credit:Bloomberg

She isn’t alone – for the first time since the Second World War, more Australians are returning home than leaving. The rough count last year: 25,000. The pandemic has people everywhere rethinking life and work. But few are journeying home quite like Australians, a famously peripatetic crew that for decades has cut a swath through business and finance around the world.

They’re arriving in a country where COVID-19 cases are rare enough that each is discussed and dissected individually. At a time when Singapore is locking down yet again, and New York City is emerging tentatively from the ravages of a virus that took almost 33,000 lives, Sydney’s bars and restaurants are mostly operating like it’s 2019, and the hit Broadway musical Hamilton is playing to its only live audience in the world.

Where exactly all these Aussies are returning from is a matter of conjecture. But at least some have arrived from major financial centres like New York, London and Hong Kong. And the money they’ve brought with them is now flowing through the Australian economy, adding to the demand for teeteringly-high priced houses and boosting applications for private school places in cities like Sydney.

Nowhere is the trend more evident than in the finance industry, where Australia’s success at containing the virus has coupled with once-in-a-decade disruptions in the investment banking market in the country to create optimal conditions for returning home.

“Did I think about what I was giving up? For sure, I did: the next step would’ve been partner,” said McCormack, who left her managing director role at Goldman Sachs to join Jarden Securities, a New Zealand investment banking newcomer to the Australian market.

But when the startup bank came calling with the opportunity to lead its natural resources and investment banking team months into a brutal pandemic that had already driven some of her best friends out of New York, the Goldman Sachs partner path suddenly seemed less alluring. “And the FOMO isn’t as bad knowing that New York now isn’t the New York that I moved to or enjoyed for 10 years.”

Australia isn’t the only country reaping the benefits of successfully containing the virus. Other countries in a similar position are benefiting from a positive public-health response that’s winning over talent, with Taiwan, for example, seeing tech entrepreneurs come back home in the past year.

Silicon Valley veteran Susan Wu, an early executive at the $US95 billion ($122.3 billion) online payments processing company Stripe, moved to Taiwan just before the pandemic broke out. She said she’s now working to strengthen Taiwan’s startup industry and is calling on “all other recent COVID refugees” to help build long term tech infrastructure there. 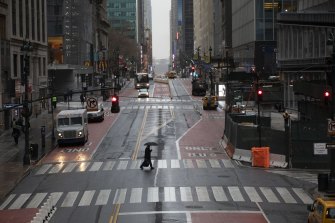 As the pandemic wore on, New York lost its allure for many Australians working there.Credit:AP

Back in Australia, the migration is helping fire up the property market, according to ANZ chief Shayne Elliott. “It’s just an extraordinary number of people who have come home, and the first thing they want to do is buy a house,” Elliott said. “A lot of these people had money, they had deposits. They’re coming from London, they’re coming from Singapore, the US” He said the bank had underestimated how much the returnees would boost the market.

Among those now looking for a home in Sydney are Chris Nicholson and his wife, Jackie Cleary. Nicholson, formerly a senior managing director at Evercore in New York, is a beneficiary of the upheaval in Australian investment banking.

The arrival of Jarden and investment bank Barrenjoey Capital Partners, both heavily stocked with bankers who helped make UBS Australia’s top player, has sparked a massive game of musical chairs. Looking to fight back with some hires of its own, UBS poached Nicholson for its infrastructure advisory team from New York.

For Nicholson and Cleary, who had worked as a managing director with Bank of America last month’s big move was driven by family and lifestyle – they wanted their two children, aged 6 and 4, to eventually go to high school in Australia. The pandemic crystallised the need to be closer to ageing parents back home too.

“It’s fair to say that when you’re sitting in quarantine in New York as we were, and as the weeks go by and the months, it does sharpen the mind. And as a result, you might be more open to the idea of returning home than you otherwise would be.”

Nicholson, who met his wife on a ski trip to Colorado, said they’ll miss the skiing but are excited about living by the beach and being able to enjoy the outdoors 12 months of the year.

Cleary jumped ship to Jefferies Group, where she’ll be heading up the bank’s financial institutions advisory team. Michael Stock, CEO of Jefferies in Australia, said the bank has hired internally and externally from London, New York and Hong Kong over the past year.

“In an investment banking context, Australia has historically been a net exporter of talent, but through COVID and the broader opportunities that have now emerged across newly-established Australian firms, that trend has certainly reversed,” said Stock, who himself made the move back to Sydney from London more than a decade ago.

Jarden’s McCormack wasn’t the only recent defector from Goldman Sachs. The Kiwi bank hired Sarah Rennie to lead its equity capital markets business last year, creating the perfect opportunity for New York-based Ian Taylor to come back to Sydney to fill the role at Goldman Sachs. Taylor, who moved with his girlfriend in November, had spent almost a decade in the Big Apple, first at Goldman Sachs, and then at billionaire investor Mike Novogratz’s Galaxy Digital.

“I think it’s fair to say that when you’re sitting in quarantine in New York as we were, and as the weeks go by and the months, it does sharpen the mind,” Taylor said. “And as a result, you might be more open to the idea of returning home than you otherwise would be.”

Far from giving up on career aspirations, Taylor said his move underscores the opportunities that are available in Australia right now. While he misses the energy and convenience of New York, he’s happy to be closer to his young nieces, and enjoys the weekend walks along Sydney’s famous coastal walk south from Bondi Beach.

“The reality is we are all likely to live long lives, and you have to take a long-term view on your career,” he said. “Right now, I’m relishing the challenge in front of me and I’m sure that will create other opportunities within the firm for me here, and there may be opportunities offshore again in the future.”