New York (CNN Business)Richard Branson, the British billionaire and entrepreneur, announced late Thursday that he would attempt to go to space on July 11, just nine days before the world’s richest man, Jeff Bezos, will make his own spaceflight. But even as he effectively cut ahead of Bezos, Branson dismissed the notion of it being a “race” and went so far as to invite his fellow billionaire to come watch.

The Virgin Galactic founder told CNN Business in a Friday interview that his surprise announcement about making his long-awaited trip to outer space next week on a Virgin Galactic spaceplane was a coincidence, and had nothing to do with Bezos’s timing. Bezos said last month he would fly on July 20 aboard a rocket built by his own space company, Blue Origin.
“I don’t know for sure exactly when Jeff Bezos is going, he may decide to go before us, but I honestly don’t see this as a space race,” Branson told CNN Business’ Rachel Crane. “I would love for Jeff to come and see our flight off whenever it takes place. I would love to go and watch him go in his flight, and I think both of us will wish each other well.”

Since the early 2000s, Branson and Bezos have been vying to develop, test and launch suborbital rockets that can take wealthy thrillseekers on brief, 2,300-mile-per-hour rides a few dozen miles above Earth. And their efforts have long been framed as a “billionaire space race.” 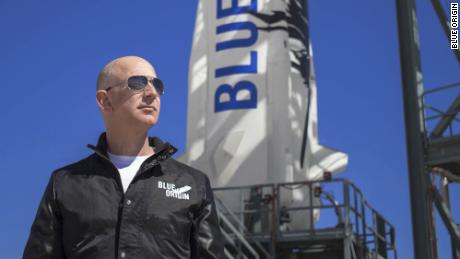 SpaceX CEO Elon Musk’s name is also often thrown around in the “space race” game, but the orbital rockets SpaceX builds are far more powerful than the suborbital tourism rockets built by Branson and Bezos, requiring more infrastructure to launch. Musk has said little about his personal space ambitions beyond that he’d “like to die on Mars — just not on impact.”

In interviews, Branson has repeatedly said he’s not interested in any sort of cosmic race. But his plan to get to space on July 11 was not part of the testing roadmap laid out earlier this year by Virgin Galactic. He told CNN, however, that any suggestion that Virgin Galactic may be compromising safety in an effort to get Branson to space before Bezos is “completely wrong.”
“You’ve got to remember that Virgin Galactic has people on every spaceflight…The fact that I’m willing to fly with those people shows confidence,” Branson said. “I think the least the founder of the company can do is go up there and fly with his people.”
Virgin Galactic’s space plane, called SpaceShipTwo, has been in development for well over a decade, and it functions much differently than Blue Origin’s fully autonomous rocket that lifts off vertically from a launch pad. 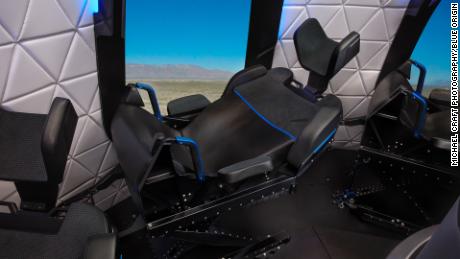 SpaceShipTwo takes off from an airplane runway attached beneath the wing of a massive, custom-designed quad-jet double-fuselage mothership known as WhiteKnightTwo. Once the mothership reaches about 40,000 feet, the rocket-powered plane is dropped from in between WhiteKnightTwo’s fuselages, and fires up its engine and swoops directly upward, accelerating up to more than three times the speed of sound, or 2,300 miles an hour.
Once it reaches the very top of its flight path, it hangs, suspended in microgravity, as it flips onto its belly before gliding back down to a runway landing. From takeoff to landing, the whole trip takes roughly an hour.
Virgin Galactic had planned to start flying customers years ago, but its development program was set back by several mishaps, including a 2014 test fight accident that resulted in the death of a co-pilot.
Still, more than 600 people have agreed to pay between $200,000 and $250,000 to reserve a seat aboard one of the company’s space planes, and Virgin Galactic said it’s expecting a massive influx of new ticket orders when it reopens sales — at a higher price point — in the near future.

Bezos’ Blue Origin has not yet begun selling tickets to the general public, but one seat on Bezos’ upcoming flight will be taken by an auction winner who agreed to pay $28 million. The auction winner has not yet been named, but he or she will fly alongside Bezos, his brother Mark Bezos, and Wally Funk, an 82-year-old pilot and one of the “Mercury 13” women who trained to go to space in the 1960s but was never given the opportunity to fly.
After Branson’s flight, Virgin Galactic is expected to conduct one more test flight that will host an Italian Air Force research mission before beginning commercial operations.
Source: Read Full Article