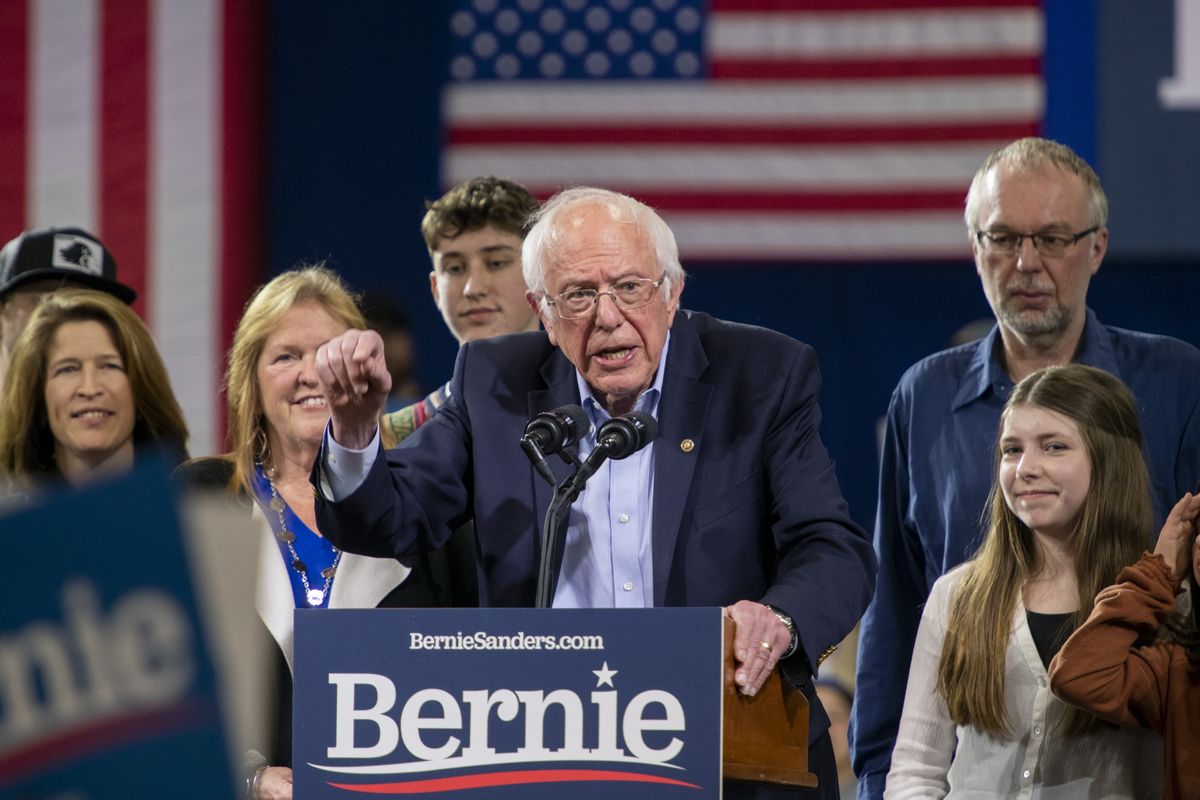 Bernie Sanders is staring down a far more difficult path to the nomination than it seemed just a few weeks ago, as the map, the momentum and the demographics all favor a newly resurgent Joe Biden — who is in a strong position to pull away from the Vermont senator coming out of Super Tuesday.

The next primaries on March 10 and March 17 go through states where Biden is poised to do well, like Michigan with its autoworkers and African-American population, Florida with its older residents and Ohioans who embrace Biden’s working-class roots. April 28 sees six important states that Biden could sweep, including New York and his home state of Delaware.

Biden’s also got the thing Sanders had just a week ago, momentum and the feeling of being a winner. Voters like to vote for winners, and even Sanders’s big night in California feels smaller than it might compared to Biden’s 10 wins on Tuesday, including just-called Maine.

Sanders also failed to prove on Super Tuesday that he can expand much beyond his small but energetic base of young and heavily white voters drawn to his left-of-center policy plans, even as he did capture Latino votes in Nevada and California. That may prove a potent electoral coalition in the future, but in the here and now, Biden’s natural base of African-Americans, women and older voters is the beating heart of the Democratic Party. That’s why the party establishment fell in line, another boost for Biden.

“If Democrats want a nominee who will build on Obamacare, not scrap it; take on the NRA and gun manufacturers, protect our children; who’ll stand up for the middle class, not raise their taxes and make promises that can’t be kept, then join us,” Biden has been saying at rallies, an explicit appeal for Democrats to reject Sanders as out-of-step.

Sanders’s campaign said he won’t go quietly but will be more explicit in criticizing Biden’s record, particularly on his support for the Iraq War, for advocating cuts to Social Security and Medicaid, and on Biden’s trade record, especially his support for NAFTA and trade with China.

Sanders aides also rejected any suggestion he would alter his message. They said Sanders will continue to be Sanders, only sharper, as now he can focus his fire on Biden and the former vice president’s long record in Washington without the distractions of other rivals.

Sanders started the debate early Wednesday morning, releasing two ads directly attacking Biden on those issues. A third takes a different tack. It features Barack Obama praising Sanders for being authentic and passionate. The Obama ad comes as Sanders has struggled to win over black voters but also as he has attacked the “Democratic establishment” for trying to halt his campaign’s momentum.

The Obama ad stung the Biden camp. Spokesman Andrew Bates tweeted that “no quantity of ads can rewrite history – and there’s no substitute for genuinely having the back of the best president of our lifetimes.”

California Representative Ro Khanna, one of Sanders’s campaign chairs, said Sanders would use his promise of Medicare for All and a plan to tackle mass incarceration to attract the older and minority voters Biden has on his side.

“He’s not going to abandon his principles, but he is going to talk about building a large coalition,” Khanna said. “He’s proud of the Democratic party from FDR to President Obama.”

March is filled with primaries that could decide the nominee, and Sanders may have one more shot at besting Biden, next Tuesday.

Sanders in 2016 won four of the six states voting on March 10: Idaho, Michigan, North Dakota and Washington. He lost by less than 1,600 votes in Missouri, giving him just one fewer delegate than Hillary Clinton, and was blown out only in Mississippi, with its large African-American population.

A Detroit News/WDIV-TV poll released Wednesday shows Biden leading Sanders in Michigan, 29% to 22.5%, with a margin of error of 4 percentage points. But half of the poll was conducted before Biden’s comeback and the pollster said the former vice president did better each of the four days the poll was being conducted.

Sanders did better than expected with African-American voters in the Detroit area and won 62% of white men.

But then the path gets rocky. In 2016, Sanders lost all four states that vote on March 17 — Arizona, Florida, Illinois and Georgia. But this year, he’s hoping his anti-free trade message will resonate in the agricultural and manufacturing states of Illinois and Ohio. In the retirement havens of Arizona and Florida, he will hit Biden on his previous willingness to cut Social Security.

The April 28 so-called Acela Primary will be the most perilous for Sanders. In 2016, he lost five of the six states — Connecticut, Maryland, New York, Pennsylvania and Delaware. Biden calls the last two home.

Biden was initially reluctant to attack Sanders, describing him as a good man whose approach to policy is wrong. But as his own campaign fell and Sanders’s rose, he’s begun pointing to Sanders’s refusal to formally join the Democratic Party, the unlikelihood of passing Medicare for All, his mixed record on gun control and lack of legislative accomplishments.

One open question is whether Elizabeth Warren stays in the race. Her presence arguably cost Sanders delegates on Tuesday, as Biden won Massachusetts, Minnesota and Texas by margins smaller than Warren’s vote total.

Sanders does well on the West Coast but Warren has focused much of her recent efforts on Washington state, campaigning in Seattle last month and spending more than $500,000 on advertising even before Tuesday’s primaries. There is no recent public polling there to gauge where the candidates stand.

Some progressives fear her decision to stay in the race after she failed to finish in the top three in any of the early state contests has cost Sanders support, especially after moderates Pete Buttigieg and Amy Klobuchar dropped out and fell in line behind Biden.

“Imagine if the progressives consolidated last night like the moderates consolidated, who would have won?” Representative Ilhan Omar, who campaigned with Sanders in St. Paul on Monday, wrote on Twitter late Tuesday night. “That’s what we should be analyzing. I feel confident a united progressive movement would have allowed for us to #BuildTogether and win MN and other states we narrowly lost.”

— With assistance by Jennifer Epstein