Two of Australia’s biggest oil and gas companies are set to create a $21 billion industry juggernaut after Santos raised its offer to merge with rival Oil Search. 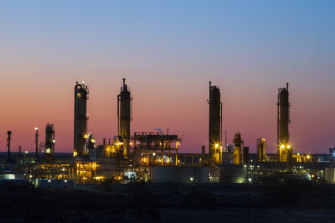 Santos, one of Australia’s largest oil and gas producers, has sweetened its offer to merge with Oil Search.Credit:Kelly Barnes

The offer, which Oil Search’s board intends to unanimously recommend for approval, comes after Oil Search initially rebuffed an earlier offer from Santos in July, saying it undervalued the company and its assets in Papua New Guinea.

The new offer increases the premium from 12 per cent to 19.7 per cent.

“It represents a compelling combination of two industry leaders to create an unrivalled regional champion of size and scale with a unique diversified portfolio of long-life, low-cost oil and gas assets,” Mr Gallagher said.

Oil Search told investors it had considered the revised proposal and has determined to grant due diligence access to Santos, subject to the parties entering into an acceptable confidentiality agreement, expected to take four weeks.

The board said it would recommend the proposal in the absence of a higher offer being received.

Any merger implementation agreement entered into between the parties would itself be subject to a number of conditions including Oil Search shareholder approval, PNG court approval and regulatory approvals, the companies said.

A landmark report by the International Energy Agency in May recommended investors must avoid funding any new oil and gas fields for the world to achieve the Paris agreement’s goal of limiting global temperature rises to 1.5 degrees.