A government notice on Wednesday said officers arrested six current and former senior staff members of “an online media company” in the morning for “conspiracy to publish seditious publications.”
“The arrested persons included three men and three women, aged 34 to 73. The searches on their respective residences are underway,” the statement said, without identifying the individuals or the company.

The Hong Kong Journalists Association (HKJA) confirmed at least six current or former directors and senior staff of Stand News had been arrested early in morning and national security police were now searching its office.

“The Hong Kong Journalists Association is deeply concerned that the police have repeatedly arrested senior members of the media and searched the offices of news organizations containing large quantities of journalistic materials within a year. HKJA urges the government to protect press freedom in accordance with the Basic Law,” said the HKJA, which has recently come under a firestorm of criticism from Hong Kong authorities and Chinese state media. 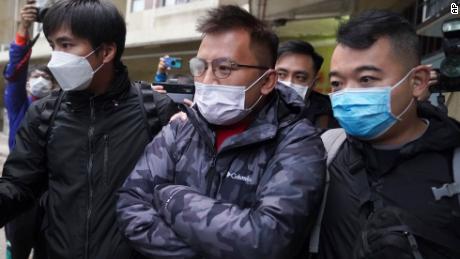 The association added that Ronson Chan Ron-sing, the deputy assignment editor of Stand News and the chairman of HKJA, was also “taken away by the police.”
Stand News had posted a video of police arriving at Chan’s home for a raid earlier on Wednesday morning.
“This is the court search warrant (for us) to enter and search relevant materials. The charge is conspiracy to publish seditious publications,” an officer is heard saying in the video.
CNN has reached out to Stand News for comment.
Among the six arrested was Cantonese pop star and prominent pro-democracy activist Denise Ho. She was arrested at her home at 6 a.m. this morning, her assistant, who asked not to be named, confirmed to CNN.
Ho was formerly on the board of directors at Stand News. Police spent over two hours at the singer’s home and seized phones and computers as well as her ID card and passport, her assistant told CNN.
The raids come one day after jailed Apple Daily founder Jimmy Lai was hit with the similar charge of “producing and distributing seditious publications”.
Lai was sentenced to 13 months in prison this month for inciting and participating in the city’s annual candlelight vigil to commemorate the Tiananmen Square crackdown last year. Authorities had declared that assembly illegal, owing to coronavirus restrictions.
Apple Daily, Hong Kong’s most prominent pro-democracy paper, shut down in June after hundreds of police officers raided its office and arrested executives under National Security Law charges.

Speaking at the association’s annual dinner Tuesday, Chan described the arrest of Lai and his colleagues and the subsequent shuttering of the Apple Daily as a “shockwave throughout Hong Kong” which “had a big impact on news workers who are still struggling in the frontline every day.”
The National Security Law was drafted in Beijing and promulgated in Hong Kong in June 2020. The law criminalized acts of secession, subversion, terrorism, and collusion with foreign forces to endanger national security — with a maximum sentence of life imprisonment for all four.
Source: Read Full Article