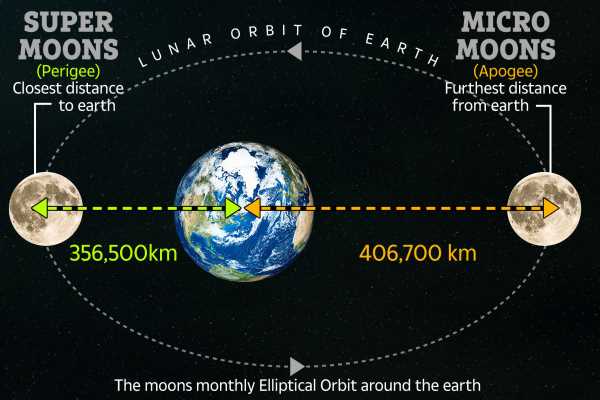 A SUPER Worm Moon is set to appear in the sky this evening.

If you're a fan of stargazing then you're in for a treat as you should be able to spot the Moon looking bigger and brighter with the naked eye.

Full Moons occur when when the Moon is on the opposite side of Earth to the Sun.

This results in the lunar surface being fully illuminated.

A Super Moon happens when a full Moon reaches the perigee, which is the point in the orbit of the Moon  when it's closest to the Earth.

The opposite of the perigee is the apogee and when the Moon reaches this point it will look much smaller than usual.

Tonight's Supermoon is referred to as a Super Worm Moon because of native tribes in the US associating this time of year with spotting earthworm markings in the soil.

“According to the Farmer’s Almanac, the native tribes of what is now the northern and eastern US named this the Worm Moon after the earthworm casts that appear as the ground thaws.

"The more northern tribes knew this as the Crow Moon, when the cawing of crows signalled the end of winter.

"Other northern names are the Crust Moon, because the snow cover becomes crusted from thawing by day and freezing at night, or the Sap Moon as this is the time for tapping maple trees.

"Europeans called this the Lenten Moon."

If you don't get a chance to see the Moon tonight then don't worry as two more Super Moons will appear in 2020.

For the best chance to see the Moon in all its glory you should look to the sky around sunset although it should appear bright in the sky all evening.

What is a Super Moon?

A Super Moon appears when a full Moon aligns with the point closest to the Earth during its elliptical orbit.

During this time it appears 14% bigger and 30% brighter than usual.

It wasn’t until 1979 that Richard Nolle first defined the Super Moon, which is now a widely-used term.

The astrologer explained that the phenomenon is “a new or full Moon which occurs with the Moon at or near (within 90% of) its closest approach to Earth in a given orbit”.

Based on Nolle’s theory, the moon would have to be around 226,000 miles away from the Earth to be considered "super".

Because of its relatively close proximity to the Earth, the celestial body’s surface appears a lot bigger when a Super Moon occurs.

The different types of moons

A Blue Moon refers to the occasion when a full Moon appears for the second time in the same month, this is very rare and the next Blue Moon should occur on Halloween in 2020.

The Harvest Moon appears around the time of the autumnal equinox when farmers tend to do their main crop harvesting.

A Supermoon appears when it is at its closest point to Earth and therefore at its brightest, the next one will appear in September.

A Blood Moon occurs during a total lunar eclipse, the next one should happen in May 2020.

Each month of the year actually has its own special full moon phenomenon, they are as follows:

In other news, Nasa's Mars 2020 rover has officially been named Perseverance and will be blasted off to space in July.

And, we've rounded up everything you need to know about the Super Moons of 2020.

Will you be looking out for the Worm Moon this evening? Let us know in the comments…