Having abandoned its merger negotiations with Crown, NSW-based casino group Star Entertainment has developed predatory instincts and a taste for corporate restructuring.

It is getting its ducks in a row to cherry-pick from any juicy bits of the entrails of Crown – which could be served up if the Packer-controlled group is broken up.

Such an outcome is a distinct possibility if either the Victorian or West Australian royal commissions find Crown is unsuitable to retain its casino licences in either state. 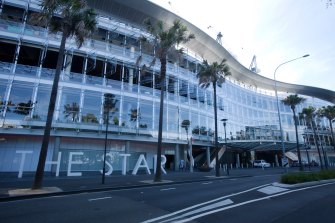 The Star gets its ducks in a row.Credit:James Brickwood

And then there is the potential domino effect. A bad outcome for Crown in Victoria and WA could place enough pressure on the NSW government to prevent Crown from holding a casino licence in NSW.

We won’t know how this plays out until October when commissioner Ray Finkelstein hands down his recommendations to Victorian Premier Dan Andrews.

It’s a potential once-in-a-corporate lifetime opportunity that Star wants to capitalise on but one that requires the NSW casino to have optionality.

With significant regulatory uncertainty around who would be able to own the Melbourne licence if it is lost by Crown, Star is having to juggle a number of potential scenarios.

For example, there are some in the casino industry that predict the Victorian government will seek to have Crown operations outsourced via a management contract for a period of time until Crown regains suitability.

Star would be an obvious candidate.

If Star were eligible to buy any of Crown’s casinos, this is an option that its chief executive, Matt Bekier, says would also be looked at but it would depend on the price of “Crown’s pieces” he said.

But to capitalise on potential opportunities, Star needs the financial readies.

And that’s where the restructuring plans come in.

It has already begun the process of splitting itself in two – to create a property company and an operating company – a structure dubbed in finance circles as opco/propco.

Star is already well advanced with the first stage of this process, having announced on Thursday that it is already courting expressions of interest for those wishing to buy up to half of its Sydney integrated casino complex. The value of the property is worth up to $3 billion so selling half could net the company as much as $1.5 billion.

This model has been popular among casino operators both here and overseas. Crown has looked at it in the past but got caught up with the complexities associated with the fact that most of its Melbourne facilities are owned by the government and the subject of long-term government leases.

While Star has only now begun to actively pursue this opco/propco structure, it has been considered previously.

The obvious candidate would be private equity giant Blackstone which lurks in the background of the Australian casino industry. It has a history investing in propco models and has a 10 per cent stake in Crown. Earlier this year Blackstone proposed a takeover of Crown which was rejected by its board.

In addition to working on the part sale of its Sydney property, Star has also announced it is seeking expressions of interest in selling an interest in the Treasury Buildings in Queensland – which would allow it to get rid of some development obligations that come with this property. The value has been put at between $200 million and $300 million.

In the meantime, it is difficult for Star to build organic cash reserves when its main Sydney property has been subject to COVID closures or restrictions – thus limiting revenue and profits. 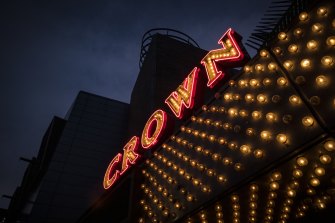 The fate of Crown’s Melbourne casino licence will be known in October.Credit:Chris Hopkins

But in Queensland, where COVID interruptions were minimal the results from the Brisbane and Gold Coast casinos were particularly strong. Earnings out of the Brisbane operations were up 192 per cent to $86 million while the Gold Coast grew earnings by 38 per cent.

This allowed Star to contain a fall in group overall underlying earnings to 5 per cent.

Looking forward, the current half will be under an earnings cloud as the Sydney facility has been closed since the start of this financial year.

But it also provided a portent for the potential bounce back in casino trade when COVID restrictions are eventually lifted.

“The experience last year has demonstrated how resilient our business is and how quickly customers return when our properties are allowed to open. This gives us great confidence as vaccination levels increase and a return to normality approaches,” Bekier said.