Stelter: The story of January 6 keeps getting bigger

(CNN Business)A version of this article first appeared in the “Reliable Sources” newsletter. You can sign up for free right here.

Okay, Sean Hannity, what are you going to do now?

He started his Tuesday night Fox News show by teasing a message to the “cowardly swamp creatures” in DC and the “media mob.” Throughout the show, Hannity hyped the segment, telling his audience, “You don’t want to miss it.” The suggestion, of course, was that he was going to issue a response to the January 6 Committee’s request for his cooperation in the insurrection investigation. But the promotion for the segment ended up being a head fake. 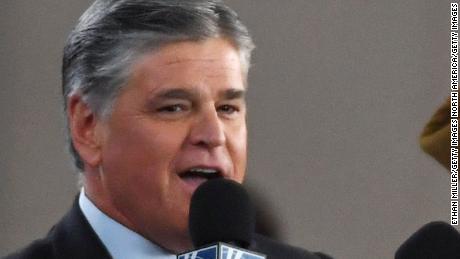 In the final moments of his show, Hannity instead delivered a rant on the lack of Covid testing availability. Which is to say that Hannity wholly ignored the 1/6 committee’s request and the damning revelations contained in the letter its top members sent to him. But he won’t be able to stay silent about it forever. After the show, his outside counsel Jay Sekulow issued a new statement: “We are evaluating the letter from the committee. We remain very concerned about the constitutional implications especially as it relates to the First Amendment. We will respond as appropriate.”
Fox Corp. also remained silent about what Hannity and other stars knew in the run-up to the riot and in the days afterward. Lachlan Murdoch and Suzanne Scott can dismiss Hannity as an opinion host all they want, but he should still be subject to some editorial standards…

Hannity’s texts to Mark Meadows, disclosed by the J6 Committee, illustrate for the umpteenth time a clear breach of traditional news media ethics by Hannity. And they show, also for the umpteenth time, how Hannity operated during the Trump years behind the scenes as a shadow chief of staff. The new part, perhaps, is how ineffective he was!
As Jamie Gangel pointed out on “Don Lemon Tonight,” every line of the letter was crafted on purpose. So what about Hannity’s December 31, 2020 message to Meadows that said, “I do NOT see January 6 happening the way he is being told.” Did Hannity try to talk Trump away from delusional thinking? If so, he failed. And what about the January 10 text to Meadows and Jim Jordan, saying, “Guys, we have a clear path to land the plane in 9 days. He can’t mention the election again. Ever.” Clearly Trump doesn’t respect Hannity very much, since Trump’s past 12 months have been full of election lies.

The texts also prove — once more — that Hannity was dishonest with his audience. He likes to claim that he says the same thing privately as he says publicly. But that clearly isn’t the case. Privately, in these text messages, Hannity was expressing profound worries about Trump. But, publicly, those concerns were never conveyed to his audience. Instead, Hannity served as a loyal cheerleader of Trump until the end.
Brian Stelter went off about that on Lemon’s show just now, highlighting Hannity’s January 10 comment to Meadows that “I did not have a good call with him today.” Stelter said: “On January 10, 11 and 12, what did Sean Hannity tell his viewers” about that call? “Did he inform them about Donald Trump’s mental health? About his state of mind? No. He lied and assisted the cover-up.” Stelter also pointed out that House members have many, many more texts from other Fox personalities. What else is going to be revealed?

Well, so much for this valuable friendship, eh? As CNN’s Kaitlan Collins reported, Trump put out a statement Tuesday evening objecting to Hannity’s January 10 assertion that he “can’t mention the election again.” Ouch. “I disagree with Sean on that statement and the facts are proving me right,” Trump said, though the facts are obviously not proving him right…

What will Cheney say?

With the 1/6 anniversary on Thursday, Rep. Liz Cheney is booked on multiple networks this week, including Fox: She is slated to speak with Bret Baier on “Special Report” Thursday evening. She has not hesitated to call out Fox on the network’s airwaves in the past…

Stop calling it a news network

On a related note: I’ll reiterate that it’s time for actual news organizations to stop calling Fox a news network. It’s not. It’s a right-wing talk channel that has spent the past year misleading viewers about January 6 with a flood of lies and conspiracy theories designed to sanitize the events of that day. That has happened all while the network’s top hosts, as we now have evidence of, privately knew the truth about what happened. A news org’s primary job is to inform viewers with the best version of the truth. What Fox has repeatedly done — on pretty much every major topic — is to misinform…
Source: Read Full Article