Commercial networks and subscription television services are experiencing spikes in audience as more Australians begin to isolate or work remotely.

Data obtained by The Sydney Morning Herald and The Age shows free to air television audiences grew by 11 per cent last week compared to the previous, while online broadcast streaming services saw audiences climb by 9 per cent. 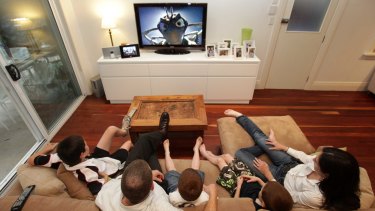 Television broadcasters are experiencing an uptick in audiences as more Australians go into self isolation.Credit:Lee Besford

Broadcasters are anticipating more growth in television viewing as Australia enters lock down to prevent the spread of the coronavirus. The growth comes despite the networks facing increased financial pressure due to reduced advertising spending.

According to the OzTAM data, the ABC Network has experienced the biggest climb in audience, up 21 per cent. Seven Network has also grown substantially, up 18 per cent compared to the previous weekpartly due to the return of the AFL season, which has since been postponed. Nine Network and Network Ten have both climbed 8 per cent week on week.

Nine, which publishes this masthead, saw growth across a range of programs, but there was a significant increase in news programming. The 6pm news bulletin on Nine grew by 18.5 per cent compared to the week prior, while its breakfast show The Today Show experienced its highest figures since 2018 — a national audience of 366,000 last Wednesday.

Seven West Media has similarly seen growth in its news and current affairs programming, and experienced a growth in AFL figures for the first round of the season between Richmond and Carlton. The average audience for the AFL match across the five metropolitan cities was 798,327, an 8 per cent increase compared to the previous year. Seven's news bulletins were the most watched programs last week, while the The Morning Show and The Chase also reported substantial growth. Evening news program The Latest, with Michael Usher, also doubled its audience.

Network Ten recorded its biggest audiences to date for Australian Survivor: All Stars and Dancing with the Stars. Its news programs including 10 News First and The Project achieved their highest weekly audience figures for the year to date.

Foxtel also reported growth, helped by the return of the AFL season as well as more consumption across drama, movies and news. “As people spend more time at home limiting the spread of Coronavirus , early viewer data highlights the importance people are attaching to watching more drama, movies, sport and news to keep the whole family entertained and informed," a Foxtel spokesman said.

The AFL match between Richmond and Carlton grew by 25 per cent year on year to an average audience of 338,849 for Foxtel. However, audiences for the NRL dipped slightly.

Subscription service Fetch TV has also seen an early increase in viewing behaviour, and expects it to progress. “As the free to air sports and reality offerings are increasingly impacted, we expect to see continued strength in news, and strong growth in movie viewing and [subscription video] consumption," Mr Lorson said.

Stan and Netflix both said they do not disclose audience data, however industry sources have said both are experiencing higher level of audience consumption, due to the fact more Australians are at home.

Newspaper and online media coverage related to the coronavirus also increased substantially last week. Real-time media monitoring service Streem reported Australia as the country with most prominent coverage on the pandemic. More than 2,800 news items have been produced by Australia between January 21 and March 22 this year, with the number of items up 76 per cent last week compared to the previous week. Last Tuesday, there were 1,347 coronavirus related items published online.