The ACCC seeks a hammer to crush a nut

The Australian Competition and Consumer Commission sees more than 300 notifications of prospective company mergers a year, but considers only 1 or 2 per cent of them contentious and opposes even fewer.

So why is its chairman Rod Sims now campaigning for a radical overhaul of competition laws?

Sims launched the campaign in a speech to the Law Council last week with a statement that is at odds with the statistics he cited: Australia’s current merger laws, he said, were failing to adequately protect competition and needed to be changed. 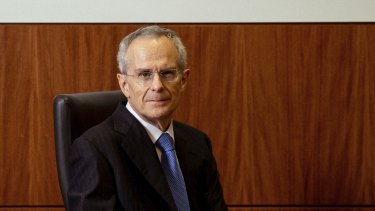 ACCC chairman Rod Sims is campaigning for a radical reform of merger law without the evidence to warrant it.Credit:Dominic Lorrimer

He effectively wants all prospective mergers to have to be lodged with and cleared by the ACCC or a specialist appeals body (not a court) before they can proceed, and the onus of proof reversed. Those advocating a merger would have to convince the commission that the merger or acquisition should be allowed on competition grounds, rather than the commission having to make the case as to why it shouldn’t.

Sims wants the law changed and the courts removed from the process.

Under the current law, acquisitions are prohibited if companies with substantial market power engage in conduct that has the purposes, effect or likely effect of substantially lessening competition in a market.

Sims wants the word “likely” defined — or redefined from the way the courts have interpreted it — to “a possibility that is not remote,” essentially removing the need for the commission to convince a court or tribunal that there was any real commercial likelihood of a substantial lessening of competition.

He also wants to have any acquisition by a company with substantial market power classified as one that substantially lessens competition, which would essentially prevent any acquisitions of any size or nature by those companies, and calls for a specific merger test for acquisitions by digital platforms.

Why is Sims seeking a sledgehammer to crush, on his statistics, a nut?

The obvious reason is the frustration and embarrassment the ACCC has experienced almost every time it has gone to court opposing a proposed merger. The commission has a shocking record in the courts, even after the introduction of the effects test.

Rod Sims is asking lawmakers to tear up and discard existing merger law and regulatory structures without establishing any material failures in the way they have operated, other than the ACCC’s own.

Most recently, in 2020 – and this might well have been the catalyst for the Sims campaign – the Federal Court rejected its argument that the merger of Vodafone and TPG was likely to substantially reduce competition in the telecommunications market.

Justice John Middleton recognised the obvious flaws in the regulator’s argument that the merger of two companies that didn’t actually compete would likely result in a substantial lessening of competition.

Where the ACCC argued the simplistic notion that having the remote possibility of having a four-player mobile industry removed represented a likely lessening of competition, Justice Middleton made the commonsense observation that it wasn’t the number of players in a market, but the quality of the competitors that determined the overall impact on competition.

The ACCC’s consistent failure to convince courts of its views could be attributed to poor legal strategies, but fundamentally it is because the cases it has brought before the courts involved hypotheses about the future of markets and competition that the courts weren’t prepared to accept. The “likely” test in the merger provisions revolves around real-world commercial likelihoods, not a regulator’s speculations.

Sims is proposing a radical overhaul of competition law that would take the courts out of the process and make the ACCC all-powerful, with only limited avenues for appeal to a specialist tribunal, removing from companies the ability to challenge the commission before the Federal Court. That’s one way of dealing with these meddlesome courts.

The Sims speech was laden with statements untroubled by evidential support such as “while the available evidence is not definitive, it appears that market power is increasing in Australia” and “market power, or the lack of competition, is having broader effects on the Australian economy. It appears to be a contributor to the slowdown in overall productivity and wages growth”.

It is almost inevitable, in markets that are as relatively small as ours, that there will be only a handful of big players in each market as companies seek scale and efficiency. That, as Justice Middleton recognised, doesn’t mean markets with only a few players aren’t competitive.

Where the ACCC sees only the consumer harm that might possibly at some point flow from a merger, it doesn’t appear to recognise potential consumer and economic benefits that are just as feasible. They might flow from increased investments an enlarged company might be able to afford, or from the innovation that an acquisition might add.

More broadly, the Bank for International Settlements has been chronicling the increase in what it describes as “zombie” companies – businesses with low growth rates, poor prospects and profits that don’t cover their interest costs – before and during the pandemic. It has said these companies are a drag on their economies’ productivity.

On some of its estimates, the proportion of zombie companies in Australia is about 25 per cent.

Without zombies and under-performing companies being acquired, or at least threatened with acquisition, and their returns improved or their capital recycled through Schumpeter’s cycle of “creative destruction,” they remain a drag on productivity and a wasteful allocation of capital.

Rod Sims is asking lawmakers to tear up and discard existing merger law and regulatory structures – and risk weakening competition, innovation and the productive used of capital — without establishing any material failures in the way they have operated, other than the ACCC’s own.