The Cops Who Killed Breonna Taylor Are Still Free

“I don’t know what is happening. Somebody kicked in the door and shot my girlfriend.”

That’s part of the audio from a frantic 911 call Kenneth Walker, the boyfriend of Breonna Taylor, made the night three Louisville Metro cops executed a “no-knock” warrant in relation to a narcotics investigation and entered the couple’s apartment using a battering ram. Walker, having no idea it was police coming into the home, fired his gun in self-defense. The cops fired back, shooting Taylor at least eight times. Walker can be heard on the 911 call crying out Taylor’s name as he attempts to explain to the dispatcher what just happened.

Nearly three months later, none of the Louisville cops have been arrested or charged for gunning down the 26-year-old Black woman in her own home.

As thousands of people around the world take to the streets and attend Black Lives Matter protests, it does feel like some small semblance of justice is being served: Four former Minnesota police officers have been charged in the killing of George Floyd, a 46-year-old Black man who died after a cop kneeled on his neck during an arrest; two white men who chased down Ahmaud Arbery in a pickup truck and fatally shot the 25-year-old Black man while he was out for a jog have been arrested and charged with murder and aggravated assault.

The death of Taylor, an EMT who had dreams of being a nurse, has also sparked national outcry. The cops were apparently trying to carry out a narcotics invsetigation, but the house where the main suspects allegedly sold drugs was more than 10 miles away from Taylor’s apartment. The Louisville Police Department executed a search warrant at her home, looking for a man who did not live there, according to a lawsuit filed by Taylor’s family. After the “no-knock” warrant was completed and Taylor was dead, police acknowledged that the man officers had been searching for was already in custody. The suit, which accuses the Louisville police of wrongful death, excessive force and gross negligence, alleges that the cops fired more than 20 rounds of ammunition at Taylor and Walker. 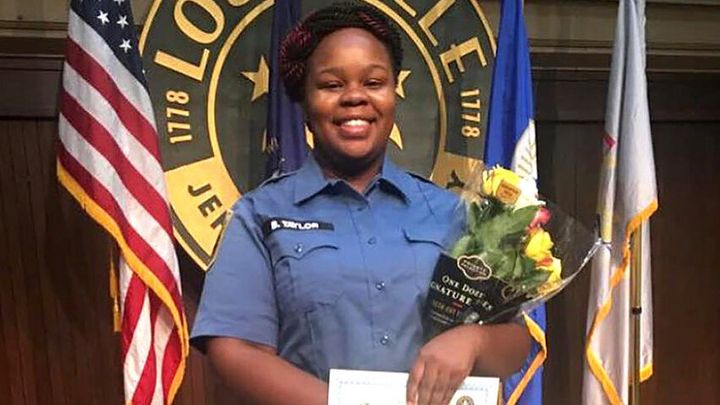 The FBI’s Louisville office has opened an investigation into the circumstances surrounding Taylor’s death in mid-March, and the city’s mayor has temporarily suspended all “no-knock” warrants.

And yet, the cops who killed her ― Sgt. Jonathan Mattingly, plus officers Brett Hankison and Myles Cosgrove — have been placed on administrative leave but are still employed by the force. Some organizers are calling for an overhaul of the entire system, arguing that we’re past the point of simply arresting individual cops for bad behavior. But serious consequences for police violence would be a first step.

Others have echoed Mathis’ concern. Recognizing Black women and queer people of color as targets of police violence is imperative when discussing police brutality, said Andrea Ritchie, a police misconduct attorney and expert in police violence against women of color and LGBTQ people.

Women and LGBTQ people of color face police violence at alarmingly high rates. Tony McDade’s death ― a 38-year-old Black transgender man who was shot and killed by Tallahassee police last week ― has also been highlighted in the protests around the country.

And while women and LGBTQ people of color do experience police brutality in the same way their Black male counterparts do (i.e., violent physical attacks), there are other ways in which they uniquely experience police violence — specifically, sexual harassment, assault and policing of one’s gender identity.

Police sometimes assume Black transgender women are sex workers because they’re trans, and cops have used stop-and-frisks to fondle private areas in order to confirm their own ideas about gender identity, Ritchie said. In widely reported cases, women of color have been stopped and illegally strip-searched in public. In 2016, San Antonio police pulled out a woman’s tampon during an unconstitutional cavity search in public while allegedly looking for weapons or drugs. In 2016, former Oklahoma City police officer Daniel Holtzclaw was convicted on 18 counts of rape, sexual battery and other charges for using his authority as a cop to sexually abuse at least 13 women, the majority of whom were Black.

Cate Young, a Los Angeles-based film critic, organized a day of remembrance and action for Taylor on Friday ― what would’ve been Taylor’s 27th birthday. Young told HuffPost’s Taryn Finley that she’s tired of not seeing Black women’s stories prioritized in the conversations about police violence.

“It’s important we say her name because she’s Black, too,” Young said.

“It’s important not to leave Black women out of the fight for Black lives because they are instrumental to that fight,” she added. “Black women matter, too, and their lives are an important part of the Black experience. When we lose them, we lose culture, so it is imperative that we bring the same energy for them as we do for Black men. Otherwise, what are we fighting for?”