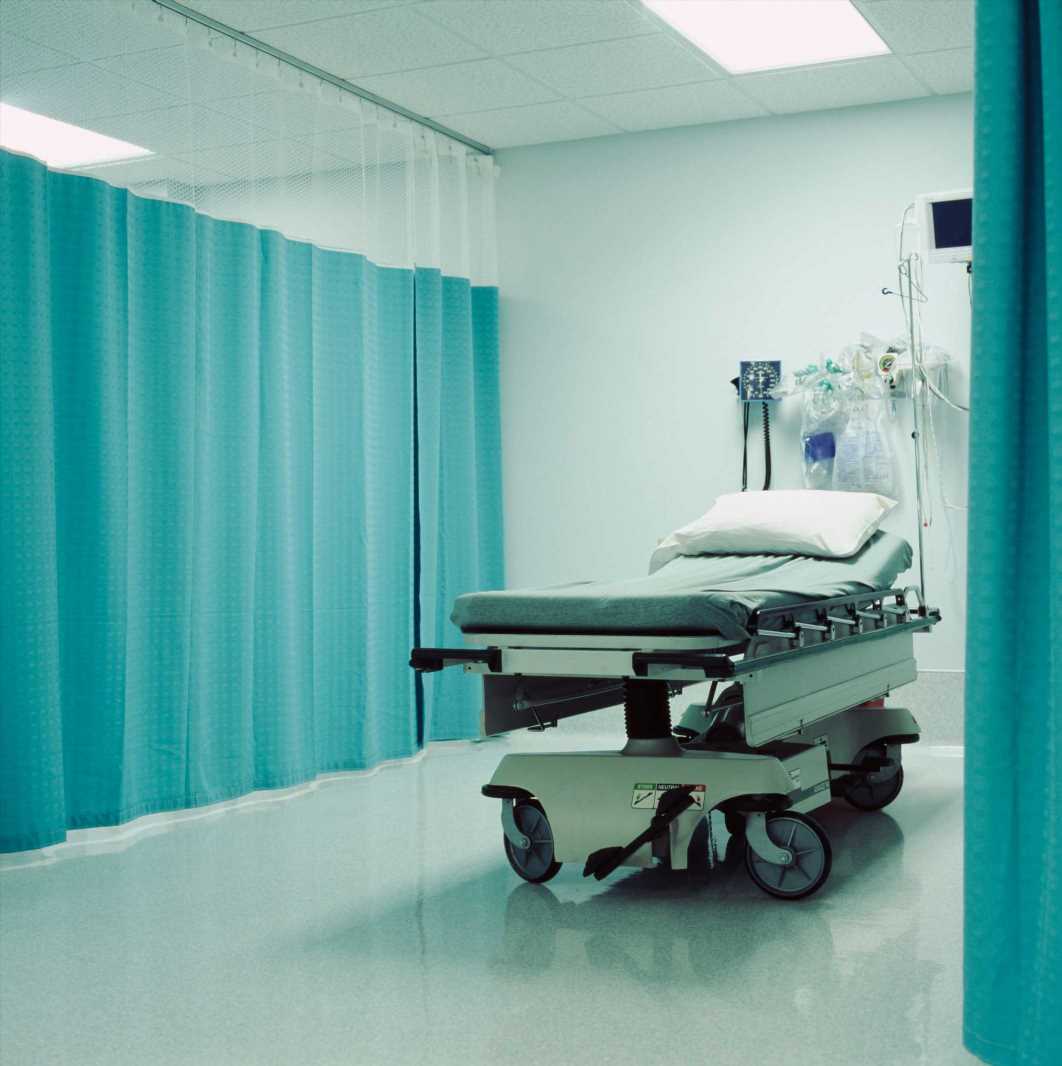 Hospitals in San Francisco are setting up tents to screen patients with respiratory symptoms before they set foot in the building.

In Seattle and New York, new guidelines call for restricting the use of masks and gowns, in order to conserve limited supplies.

In Ann Arbor, Michigan, administrators have identified outpatient clinics they can use to gather patients that might normally come into the hospital.

Nobody yet knows how serious the coronavirus outbreak will get in the U.S. But projections suggest it could place a tremendous strain on the U.S. health system, especially hospitals, leading to shortages of beds, supplies and personnel.

The level of strain will depend on how many people ultimately get sick and, in particular, how many develop the kinds of severe symptoms that require hospitalization.

The vast majority of people who develop COVID-19 will have symptoms no worse than the normal flu, allowing them to recover at home. Some may even be asymptomatic.

But when the illness settles in the lungs, as it will especially for some of the elderly and the most medically vulnerable, it can be life-threatening. Those cases require intensive inpatient care, and the ability of hospitals to provide that care has its limits.

The availability of ventilators, which are machines that assist with breathing, are the most obvious example. The U.S. currently has about 160,000 ventilators available, taking into account both what hospitals have on hand and what the government keeps in an emergency stockpile. That is probably sufficient to handle a moderate outbreak, according to government estimates, but quite possibly not enough to handle a severe outbreak resembling the 1918 influenza epidemic.

In the worst-case scenario, doctors would have to ration the use of the machines, potentially deciding which patients get them and which patients don’t.

Nobody is saying this scenario is likely. Hospital leaders here have been making contingency plans ever since the outbreak started in China, because they understood right away it could come to the U.S. and push facilities here to the limit. They can take, and in many cases already are taking, steps to stretch their resources.

But the danger of an overwhelmed hospital system is one reason public health officials are so concerned about the lack of testing. It’s also why they are so determined to slow the spread of the disease, to avoid a sudden, massive spike, even if they can’t stop it altogether.

“Flattening the curve means reducing the rate of spread in order to keep from completely overwhelming the health care system,” Dan Diekema, director of infectious disease at the University of Iowa Medical Center, told HuffPost via email.

And by “overwhelming the system,” he said, he means “bringing it to a breaking point where dire decisions have to be made, such as rationing ventilators and/or being unable to provide supportive care for some critically ill patients due to lack of capacity.”

What Worries The Hospitals

U.S. hospitals currently have about 45,000 intensive care unit beds, according to a report from Eric Toner and Richard Waldhorn at the Johns Hopkins University Center for Health Security.

In a moderate outbreak, about 200,000 Americans would need ICU beds, the report says. And in a severe outbreak, the researchers say, that number would soar to 2.9 million.

On the one hand, those are total numbers, for the duration of the epidemic. Even under the most dire scenario, it’s unlikely that 2.9 million people would need ICU beds all at once. On the other hand, ICU beds in the U.S. are already pretty full, thanks to the normal crush of patients with influenza and other major medical problems.

As a result, hospitals are routinely at capacity, forcing backups of patients “boarding” in emergency departments for hours or even days, waiting on the beds there until inpatient slots become available. And that’s before any influx from COVID-19.

The supplies that matter include devices like ventilators but also more mundane pieces of equipment like masks and gowns.

Hospitals keep their own supplies and the federal government keeps an emergency reserve, including 30 million gauze surgical masks and 12 million of the special N95 respirator masks, according to Alex Azar, secretary of health and human services. (Azar originally said there were 30 million of the respirators, but later corrected the figure.)

Eventually, the U.S. could need as many as 300 million. Already, there’s anecdotal evidence of shortages as hospitals trying to replenish their supplies, as they regularly do, struggle to find them on the market.

As for staff, even with precautions, health care workers may get sick or at the very least show symptoms, forcing them to stay at home. That can cause shortages of personnel, at all levels, from the physicians seeing patients in the emergency department to the environmental service workers who clean patient bays.

Those shortages can create more backlogs, even when supply shortages don’t exist. Indeed, when it comes to ventilators, some experts think the real problem isn’t going to be a lack of enough machines but a lack of enough people to run them if and when the epidemic forces large numbers of personnel to stay at home.

“In a severe pandemic, we certainly could run out of ventilators, but a hospital could just as soon run out of respiratory therapists who normally operate these devices,” Toner told National Geographic.

Citing a study from the U.S. Centers for Disease Control and Prevention (CDC), Toner said, “It’s not so much the number of ventilators as the number of people needed to operate the ventilators. That’s the choke point.”

How Hospitals Are Responding

Hospital administrators and staff prepare for scenarios like this all the time. And they’ve even had a little practice handling patient surges, in response to natural disasters and previous outbreaks like H1N1.

To increase physical capacity, they can both build new facilities and upgrade existing ones to handle more severe patients. It doesn’t have to involve rapid construction projects like the widely seen building of that new hospital in Wuhan, China. It can instead mean creating tent facilities or converting existing spaces to provide more care.

At the high end, that can mean bringing in engineers to create isolation rooms with negative air pressure that keep germs from escaping. At the low end, it can mean turning open spaces, even patient waiting areas, into places where staff handle more routine patients away from the isolation wards.

But if hospitals see a significant influx of patients, most will have to do more than simply build or rearrange their wards. They’ll have to change the way they handle patient care ― by, for example, doubling up on non-infectious patients in rooms or pushing patients to lower acuity settings whenever possible, in what Amesh A. Adalja, a senior scholar at the Johns Hopkins Center for Health Security, describes as a cascade process.

And hospitals can do more than change the flow of patients through their facilities. They can also change the flow in and out. “We can stop elective admissions and surgeries,” says Howard Forman, a physician and expert on health care finance at Yale University. “We can discharge patients home a little sooner than we would like.”

As the strain on resources becomes more extreme, hospitals can start limiting the use of the most protective equipment to the patients who pose the greatest risk of spreading infection ― although, as with all the other steps hospital systems are contemplating, that decision comes with trade-offs.

“We are already rationing masks and gowns at Penn,” says Ezekiel Emanuel, a physician and vice president for global initiatives at the University of Pennsylvania.

Diekema warns that “these steps can be effective temporizing measures but are not sustainable without causing harm over the long term ― lower level of care for all patients, increased risks from early discharge or lower nurse-patient ratios, etc. The use of tents or other types of open-air or non-hospital/clinic-based triage and screening is important, but again would be difficult for most places to sustain for more than a few weeks.”

Another way hospitals can increase capacity is by increasing the use of telemedicine, as several hospital systems are already starting to do. One advantage of relying more on virtual care is that it’s a way to keep potentially infectious people away from the hospital, which would be ideal since most people with COVID-19 infections don’t need inpatient care anyway.

Personnel represents a different set of challenges, in part because people who work in health care have to worry not just about their patients but also their families. Many experts are especially worried about health care workers who are also parents and whose young children may be home because of school closures.

What Government — And Everyday Americans — Can Do

Although hospital administrators will be the ones primarily responsible for handling capacity problems, they will need help from local, state and federal officials.

Especially in rural areas, hospitals will need local authorities to coordinate transportation, so that patients who need intensive care can get to facilities that offer it. All over the country, hospitals are already relying on the federal government to guarantee an adequate supply of equipment and machines.

The $8.3 billion emergency legislation that Congress passed on a bipartisan basis and that President Donald Trump signed last week includes money for state and local agencies, in part to help them buy supplies, as well as funding to help Medicare pay for telehealth services. The administration says it has been working with 3M, which manufactures the all-important masks, to ramp up production; Vice President Mike Pence visited the headquarters this past week.

Those steps will help, experts say. But they also wonder if it’s time for officials to make some bigger changes in strategy for handling the outbreak.

One place to start, they say, might be with the treatment of health care workers who have come into contact with COVID-19. The current practice is to have those workers self-quarantine, even without symptoms, but with the outbreak spreading and the possibility of personnel shortages, Adalja, among others, thinks it makes sense simply to monitor some of those workers, depending on the circumstances, and let them keep working.

“You can get exposed to tuberculosis in the hospital, get exposed to HIV, we don’t tell you to quarantine yourself, you just get monitored,” Adalja said. “Why can’t we tell health care workers who get exposed, wear a mask and we’ll monitor you for symptoms and you can go about your duties, because I think that’s what we’ll eventually have to do.”

More generally, experts say, it’s difficult for hospital administrators to make plans ― and start the process of changes in time ― when the extent of the current outbreak remains such an unknown. And that can’t change as long as the testing effort in the U.S. continues to lag.

In the meantime, experts say, they hope everyday Americans will heed advice to do what they can to limit the spread of the disease, whether it’s simple hand-washing or more serious efforts at social distancing. The more people can do to avoid needing medical attention, the easier it will be on the health system as a whole, making it possible for the people who need the most serious interventions to get them.