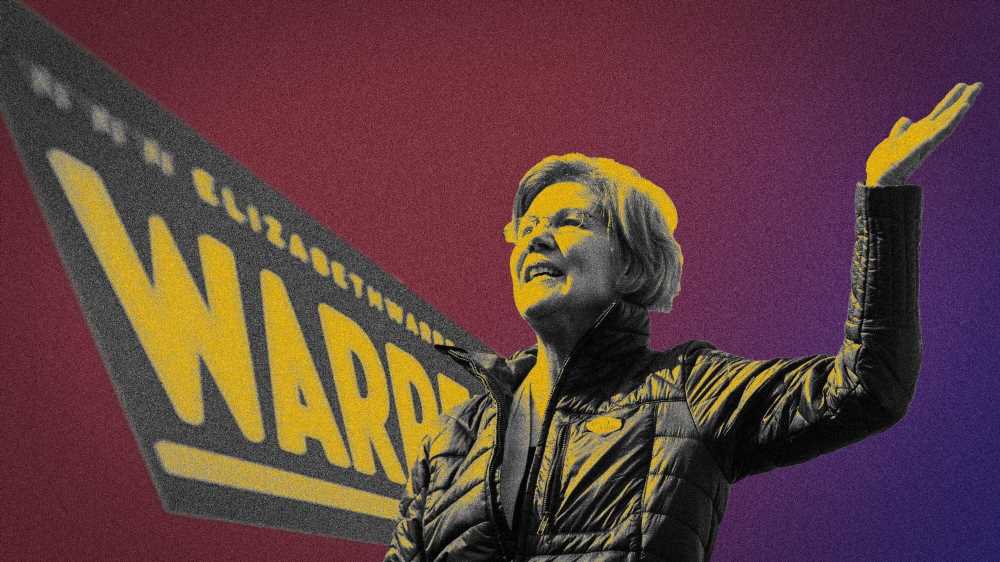 The Heartbreak Of Elizabeth Warren

Barney sometimes feels a little bit like a stalker, often poking her head outside of the window during her drive to see if her senator is around. But on Tuesday morning she didn’t have to peer. There was a big crowd outside, snaking all the way down the block toward the nearest polling place, cheering on Warren, who was on her way to vote.

Barney felt heartened by that morning’s energy when she cast her own vote for Warren that evening, wearing the Nasty Woman T-shirt she had made to wear to work on the day of President Donald Trump’s inauguration in 2017.

“I felt really hopeful,” Barney said. “It was a happy moment.”

A few hours later, that hope deflated as the Super Tuesday results rolled in. Warren didn’t win a single state, coming in third even in her home state of Massachusetts.

On Thursday, outlets reported Warren planned to drop out of the presidential race.

“I will not be running for president in 2020 but I guarantee I will stay in the fight,” she told press outside of her house in Cambridge, Mass on Thursday afternoon. “One of the hardest parts of this is all of those pinky promises and all of those little girls who are going to have to wait four more years. That’s going to be hard.”

There had been hope from the Warren camp that she could pick up steam on Super Tuesday and win a chunk of delegates. She had two strong debate performances in which she eviscerated former New York Mayor Mike Bloomberg for past sexist comments and sexual harassment lawsuits. She had released a string of policy proposals on marijuana legalization, border communities and farmworkers, and an emergency plan to deal with the coronavirus. But her disappointing Super Tuesday showing fueled already-existing calls for her to drop out and for her supporters to get in line behind fellow progressive Sen. Bernie Sanders (I-Vt.), lest they “spoil” the race for him.

But to many Warren supporters, the idea that the Massachusetts senator is the tool of some amorphous “establishment” or stayed in the race simply to pull votes from Sanders is false and insulting.

Supporters say they found Warren to be the most compelling candidate for a variety of reasons. Many also expressed pain at the vitriol they have seen directed at their preferred candidate, which feels hard to completely separate from the fact that Warren is a woman in a presidential field that has become older, whiter and more male over the last few months. 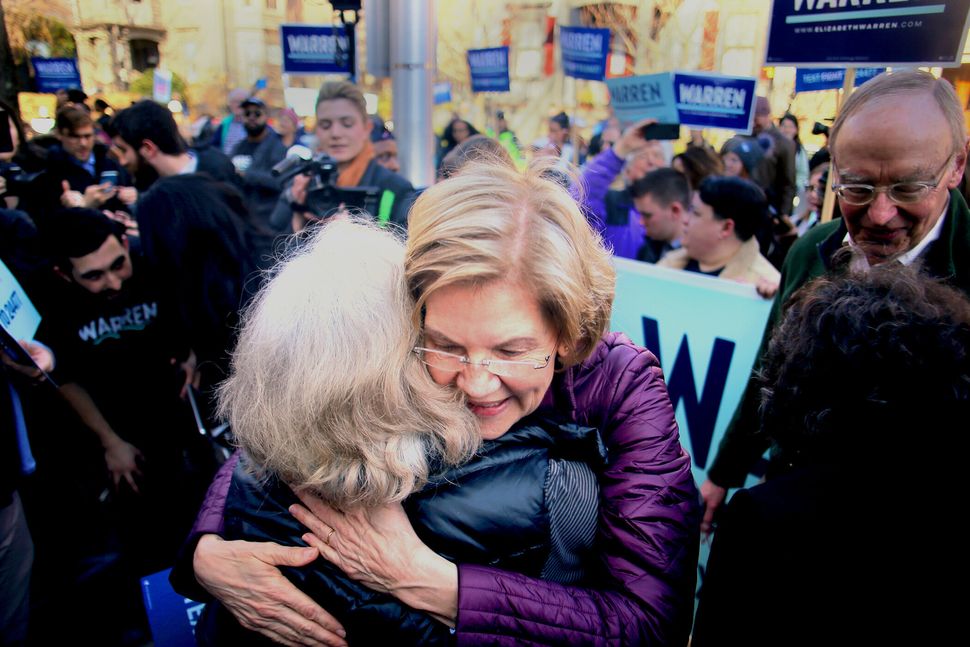 In interviews with HuffPost, voters said they saw Warren as a candidate who genuinely excited them, a politician who they believed would be a progressive voice and effective president of the United States. They described her as “incredibly smart,” “tough as nails,” “quick-witted,” “accomplished” and “passionate.”

Siiri Morley, 41, who described Warren as her “dream candidate,” told HuffPost that she admires Warren’s ability to learn from people who have different lived experiences.

Warren had made a particular effort to reach out to Black women and addressed racial justice explicitly in many of her policy proposals. For example, she laid out a plan to combat Black maternal mortality rates, a housing plan that included payment assistance to families in neighborhoods that have been historically redlined, and a child care plan that emphasized raising wages for domestic care workers.

“I like how she leads,” Morley said. “She listens and learns and has become impressively intersectional and anti-racist.” (Warren earned the endorsement of Kimberle Crenshaw, the academic who coined the concept of “intersectionality.”)

The voters who spoke to HuffPost praised her background as an educator, and her many, many policy plans, which tackle a range of issues from private prisons and immigration reform to maternal mortality, cleaner oceans and taxing the uber-wealthy.

“She thinks everything through and then has a plan to implement,” Morley said, also praising Warren’s ability to work with her Senate colleagues.

Nassim Alisobhani, a 30-year-old Warren voter from Boston, was drawn to the senator because “she deeply understands her policies and how to govern.”

Barney voted for Sanders in 2016, and until Biden’s recent surge, assumed she would likely be voting for him again in the general election. She likes the Vermont senator, but has concerns about his ability to unite the party and work effectively with more moderate Democrats. She saw Warren as someone who would combine a progressive agenda with a willingness to “work to get things done with the people she needed to work with.” She plans to vote for whichever Democrat wins the nomination.

How Not To Build A Coalition

In the wake of her disappointing Super Tuesday performance, #WarrenDropOut began trending on Twitter with calls both from Warren supporters and from progressives who saw Warren only as a spoiler for Sanders.

“If Elizabeth Warren wasn’t in the race, Bernie Sanders would have EASILY won Massachusetts, Minnesota and Texas, not to mention various other states,” he tweeted. “Our modern day Pocahontas won’t go down in history as a winner, but she may very well go down as the all time great SPOILER!”

Polls have shown that Warren voters tend to be white, college-educated professionals, but far from uniform when it comes to their second-choice candidate. Of the Warren voters that HuffPost spoke to in the past few days, they were split nearly down the middle between Sanders and Biden.

Some progressive Warren supporters say they have felt frustrated by the rhetoric they’ve observed coming from friends and allies who are voting for Sanders. Many Warren voters said that ahead of Super Tuesday they felt unfairly pressured to change their votes; the intensity ramped as the more moderate wing of the Democratic Party seemed to coalesce around Biden.

In the lead-up to Super Tuesday, Kara Segal, a 32-year-old graduate student at the University of California, Berkeley Goldman School of Public Policy, noticed a rash of Facebook posts, predominantly written by male Sanders supporters, asking Warren supporters to change their votes.

“It felt like I was being asked to sacrifice what my values were before it was even strategic,” Segal told HuffPost. “And it felt manipulative.”

Segal has no regrets about her vote, even though she is disappointed in the outcome.

“I’ll throw my support behind Bernie now because I support his vision for America, but some part of me hates to do it,” Segal said, “because I feel like in many ways it’s a validation of a lot of the ugly behavior that came out of his campaign supporters.”

Barney told HuffPost that she had friends who had been pushing her and her husband to “get on the Bernie train” for a while, but that they felt good about their choice. She also had a Sanders canvasser come to her house and tell her — after she nicely told him that she and her husband would be voting for Warren — that Sanders was the better choice because he had “many great women” around him, and that voting for Warren meant she was throwing her vote away.

“I just don’t think the dude could even comprehend what it might mean to women everywhere to see a woman president,” she said.

She has also been disturbed by the vicious commentary she’s seen about Warren online, including claims that the senator is in the race out of narcissism and blaming her supporters for Sanders’ less-than-sweeping victory on Tuesday.

“You can lob all of your vitriol onto one woman in this race, but calling on her to drop out is not a progressive thing to do,” Barney said. “And she’s not responsible for Bernie’s shortcomings in his coalition.” 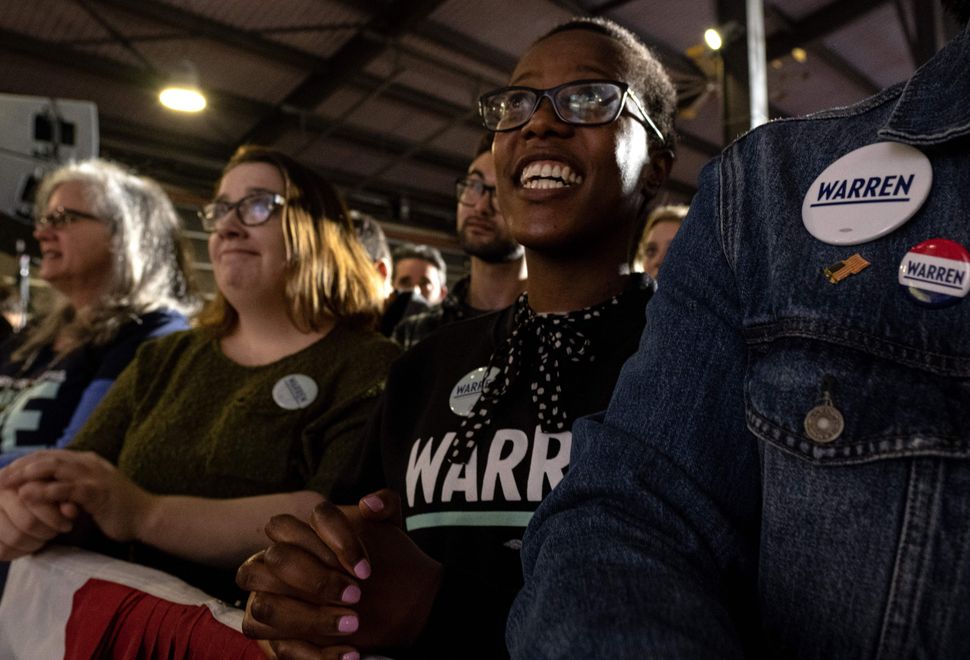 ‘Will I Ever Actually See A Woman President?’

Some Warren supporters are frustrated by what they see as a lack of reckoning with the sexism — among voters and in the media coverage of the 2020 election — they feel that Warren has been forced to contend with.

Her Instagram and Twitter posts were flooded with snake emojis. She was left off a national poll question in February that pitted all of the top candidates against Trump. She was labeled “mean and angry” for going after Bloomberg’s history of alleged misconduct and use of NDAs, and faced a blustering, sexist exchange with newly retired MSNBC anchor Chris Matthews.

Samantha Sherman, a New York-based Warren supporter who sent text messages and phone-banked throughout the primary, said she felt angry at the sexist responses she would receive.

“I began to resent that I had to sit there and hold in my rage while hearing things like, ‘Her yelling at the last debates really turned me off’ or ‘She’s not really inspiring, she just lectures,’ or just being cursed at,” Sherman said. “So, yeah, I’m feeling burned. I’m sick of having to sit there and take it and sacrifice and be the one to compromise.”

“I think if Warren was a man she would be a force to be reckoned with and certainly the front runner,” Alisobhani said.

There was some hope heading into 2020 — especially when six women jumped into the race — that perhaps having more than one woman running would temper the sexism that dogged Hillary Clinton in 2016, or at least make it easier to call out.

“I think the challenge with having only one [woman in the race] is that it is easy to discount sexism in coverage, sexism from voters, sexism in the ways we view the candidates, to chalk that up to, well, that’s Hillary,” Christina Reynolds, vice president of communications for EMILY’s List and former deputy communications director for the Clinton campaign, told HuffPost in January 2019. “It’s ‘There’s something about her I just don’t like.’ It’s the ‘I would support a woman, just not this one.’”

And, to an extent, that did happen. The women running were allowed to be defined by more than gender, and voters got to see women across the ideological spectrum forcefully debate each other.

But nevertheless, one idea persisted: that women candidates are a fundamentally risky proposition, especially against Trump.

And this, even more than overt sexism, is where Reynolds really sees room for Democrats (and the media outlets that cover them) to do better.

“We spent a year questioning electability, specifically with regards to gender,” said Reynolds, pointing to a narrative that began nearly as soon as Warren entered the 2020 race, despite women candidates winning big during the 2018 midterms. “Is there sexism out there? Sure. I also know that women can win.”

Texas voter Caitlin Jeansonne, 34, had donated to the Warren campaign multiple times, but ultimately ended up voting for Biden after his win in South Carolina because she felt like she “had no choice” if she didn’t want Sanders to win. “It pained me to vote for an old white man when there’s a competent, amazing woman on the ballot,” she said. “But I felt like she had no chance.”

Even so, Jeansonne expresses uncomfortable, mixed feelings about her choice — one that she was going back and forth on until the moment she got into the voting booth. “I’m worried that a big part of [Warren] underperforming expectations is that voters are either sexist or worried other people will be,” Jeansonne said. “And I worry that I’m contributing to the misconception.”

The problem with focusing so much on a woman’s electability based on her gender is that the question itself runs the risk of becoming a self-fulfilling prophecy.

Even as many Warren supporters gear up to work to elect whichever white, male candidate clinches the nomination, there is an overall feeling of dejection, even heartbreak.

“Last night I said to my husband, will I ever actually see a woman president?” Barney said. “I don’t know … I’m voting for whoever is the Democrat, but it gets to me. It just makes me sad.”