Electric Assisted Vehicles (EAV) has unveiled a tiny zero-emissions taxi that it says can cut city traffic congestion in half in the next five years.

The EAV Taxi isn't your typical New York City yellow cab. Instead, it's tiny, lightweight, and is in part an upgraded electric bicycle, which means the vehicle will be allowed to travel in both car and bike lanes, according to EAV's website.

The UK-based company that's developing this eco friendly taxi specializes in making micro-mobility cargo delivery units that are "engineered down from a van, not up from a bicycle."

This includes the EAV 2cubed, a last-mile electric cargo delivery vehicle that also serves as the base for the new EAV Taxi. Like the EAV 2cubed, the EAV Taxi has its maker's proprietary Cloudframe chassis with a front cab and a rear "pod" or "box," in this instance for human passengers.

According to EAV, about 65% of all taxis and "private hire vehicles" in the UK are hailed for one passenger traveling under five miles. 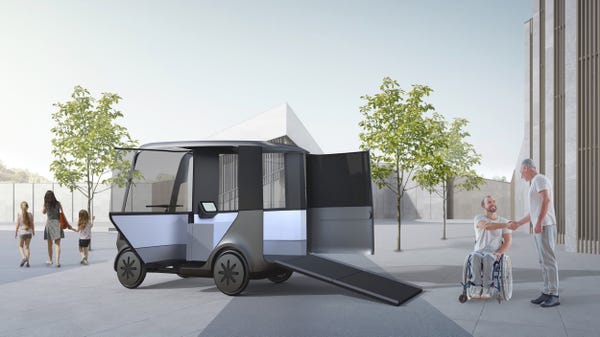 According to a statement by EAV's founder and CEO Adam Barmby, the EAV Taxi could solve efficiency issues related to electric cars, vans, and taxis, as well as problems with traffic congestion and emissions.

"[The current electric vehicles] are large and heavy and a lot of energy is simply wasted just moving their own weight around," Barmby said in a statement. "We looked closely at both taxis and private hire vehicles in urban environments and immediately saw we could be more efficient, cleaner, healthier, and just as comfortable at a much lower cost."

The introduction of the EAV Taxi could alleviate traffic congestion as the rideshare market continues to grow, in part because the new taxi is more efficient than traditional vans and cars, according to Barmby. 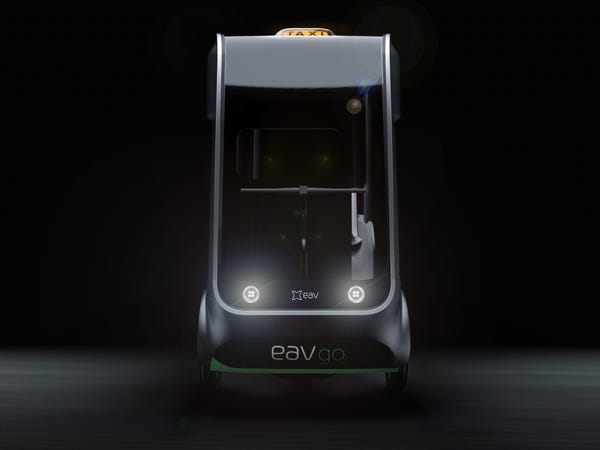 The EAV unit is 90% lighter than a hybrid or electric vehicle, and replacing a hybrid rideshare car with an EAV Taxi could prevent about 10.14 tons of carbon dioxide emissions annually, according to EAV chairman Nigel Gordon-Stewart in a statement.

Similar to the upcoming Fisker Ocean SUV, the EAV Taxi also has a roof-topped opaque solar panel unit, according to EAV's video about the taxi.

"The EAV Taxi would get a passenger to their destination in any town or city just as quickly, safely and comfortably as any other taxi or private hire vehicle (PHV)," Gordon-Stewart said in a statement. "With a number of current taxis and PHVs shortly being unable to operate in "ultra low emissions zones" [in London] towns and cities without paying high charges, the EAV Taxi is the perfect solution" 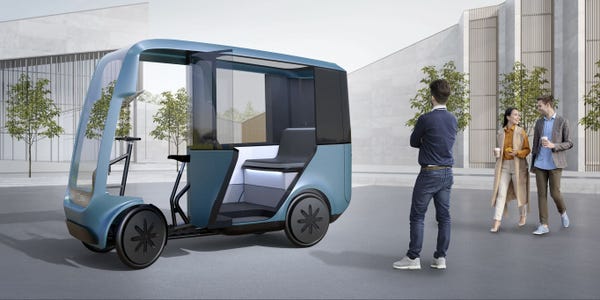 The first prototype will be built this month, and deliveries of the final unit will begin the spring of next year. 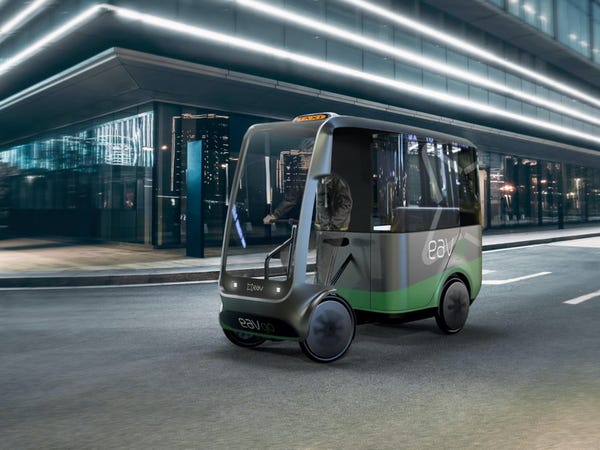 It'll have a range between 18 to 60 miles depending on the size of the battery, and clocks in at 15.5 miles-per-hour.

The vehicle can carry up to two people in the suspension-equipped rear passenger area, which is lined with memory foam seats and cushions. 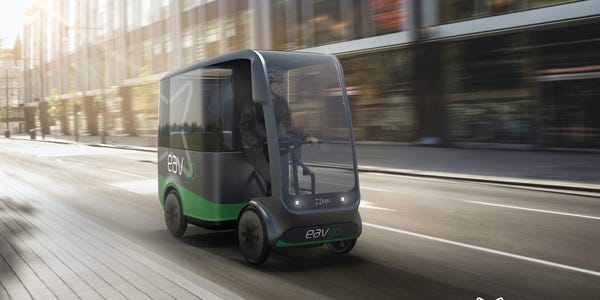 The passenger cabin has a ramp for wheelchair accessibility, and the interior can be temperature adjusted to create a more comfortable traveling experience.

There's also a screen that displays ride information and a luggage storage compartment under the seats.