The other viral problem in the COVID-19 pandemic: online misinformation

Ensure your mouth and throat are always moist. Stomach acid can kill coronavirus. It's just the flu. China created COVID-19 as a biological weapon. At least 60 per cent of the population needs to be exposed to build up "necessary resistance" to the virus.

All of these claims are inaccurate or unfounded but have quickly spread across the modern information landscape. They've been shared on social media, in some cases by well-known media personalities and politicians, and forwarded in WhatsApp messages to countless Australians.

As the coronavirus pandemic spreads, so does viral misinformation. As personal hygiene becomes an imperative, experts warn information hygiene is almost as important. 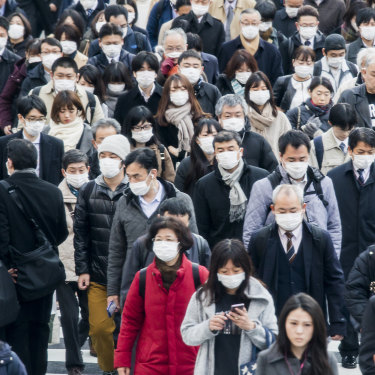 The world may be battling two outbreaks; one of viral disease and one of viral misinformation.Credit:Bloomberg

The public is facing information overload, making it hard to distinguish between what is fact and what isn't. Social media users will often hit post or retweet a lot of what they see and agree with, without fact checking it.

Fake news is not new. But in the midst of a pandemic, it is particularly dangerous.

A 2019 study by Caroline Fisher, the deputy director of the University of Canberra's News & Media Research Centre, which surveyed 2010 Australians, found only 36 per cent checked information they found online against other sources.

"The problem is we have a really bad record of checking things," Ms Fisher explains. "Last year, we asked people about whether or not they engaged in fact-checking behaviours … most people share stories [even if they think they're dubious]. They don’t go and check with other sources of information. Very few people — only 30 per cent of people — check one story against other sources."

Last Wednesday, Prime Minister Scott Morrison urged Australians to stop believing unverified content circulated on the internet and through text messages, after an online post that claimed to be based on information from an Australian government cabinet briefing said the country would be locked down by later this month. The post was a direct copy of a Malaysian government announcement.

"There's a lot of ridiculous stuff that's circulating on text messages and the internet about lockdowns, and sadly, even cases of wilful fraud and fraudulent preparation of documents — even recordings alleging to represent cabinet meetings and things of this nature," Mr Morrison said. "Don't believe it — it's rubbish." 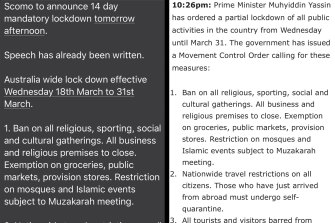 The viral hoax message on coronavirus is a copy of Malaysia's announcement.

Australian academics warn that increased use of social media combined with higher volumes of news content are causing misinformation and panic to spread more rapidly.

For example, a graph created by Andreas Backhaus, a research fellow at Brussels-based think tank CEPS to help explain why coronavirus-related deaths were so high in Italy, spread rapidly across the internet without attribution last week.

The graph was quickly contested with some sceptics asking whether it was from an authoritative source. Others pointed out that commentary in tweets accompanying the graph was incorrect such as the false claim Italy is solely testing people with symptoms (high-profile ABC medical commentator Norman Swan was among those who retweeted this misinformation).

Monash University's Dr Carlo Kopp, who has been researching fake news since the 1990s, says the pandemic has created ideal conditions for the spread of misinformation, a problem amplified by more people working from home or being isolated.

"We are seeing several nation state actors spreading conspiracy theories about the origin of the virus, we are seeing speculation being presented as fact by parties in parts of the mass media and social media, there has been a deluge of de facto and actual scams promoting false cures for the disease, sometimes intended to sell useless products, or promote dubious agendas, and in some nations, to distract the public from government bungling," Mr Kopp says.

"The problem is compounded by increasing numbers of nations going into lockdown, with anxious citizens sitting at home spending time browsing the web or engaging on social media while off work. This has potential to become the proverbial 'perfect storm' of fake news propagation."

Misinformation related to the coronavirus pandemic has been circulating social media since January. Earlier this year, Communications Minister Paul Fletcher urged Australians to remain sceptical of what they read online, after NSW Health issued a public statement about a false post that urged people not to consume certain foods or visit locations in Sydney.

There's also conspiracy theories — the US and China have separately been accused of creating COVID-19 as a bio-weapon.

And then there's countless emails and WhatsApp messages which are not based in fact.

Ms Fisher says the spread is being caused by the "reflexive" nature of social media.

"The reason why it is being spread so quickly is because it is an emotional response, people are not thinking," she says. "Everyone is scared, so there’s that panic. The virality of social media amplifies and facilitates that.”

"At the moment, there is no break between your adrenaline kicking in and you pressing share. It's this immediate reflex."

A lack of clarity from authoritative sources like the federal government can also generate more confusion and panic. ABC chair Ita Buttrose recently complained mixed messaging from the Morrison government and state leaders over the dangers of coronavirus had confused the public. She's not the only person to make this point. But it's not just the government causing confusion.

Two weeks ago, Dr Swan, who has accumulated a large following because of his prominent role at the public broadcaster, argued the government should shut down schools. But on his new podcast, Coronacast, last week, he was urging children to be in school. 2GB's Alan Jones, one of the most powerful radio broadcasters in the country, insisted most people would get a "mild illness". And on Fox Footy, Eddie McGuire suggested the warmer weather could slow the virus' spread and that it is "just the flu".

Australia's Chief Medical Officer, Professor Brendan Murphy, said it was important non-medical experts did not give medical advice to the public. It is a call backed by peak bodies such as the Public Health Association Australia which wrote to members last Wednesday asking them to reinforce the advice of Professor Murphy and his state-based colleagues.

Ms Fisher warns the media industry can play a part in misleading the public and causing panic.

"This type of event … it is the perfect news story. It ticks all of the boxes of prominent news values on conflict, fear, drama," Ms Fisher says. "What we need at a time like this is for journalism to be constructive, service journalism and not sensational clickbait. We need the news media to be providing accurate news information that is not increasing alarm in the community."

Facebook uses fact-checkers to help remove misleading content and is working with global and regional health organisations to push out authoritative content for consumers. But it faced a glitch last Wednesday when a bug in its software caused user posts of news and information to be blocked as spam. Twitter is similarly trying to direct people to more accurate information. If users search coronavirus or COVID-19, a prompt at the top of the screen urges them to "know the facts", directing them to authoritative sites such as the Australian Department of Health.

But Mr Kopp says consumers will still cling to a false belief if they become convinced it is true, regardless of whether it is from an authoritative source.

"Epidemiologists use the case study of 'Typhoid Mary' to explain infection spreading by an asymptomatic patient," he says. "A similar problem is seen in social and mass media, when an individual becomes convinced a falsehood is true, as they will usually cling to that false belief despite contrary evidence, and continue to spread it."