‘The past is the past’: News Corp’s Rupert Murdoch urges Trump to move on from 2020 defeat

Media mogul Rupert Murdoch has urged former United States president Donald Trump to move on from his loss at the 2020 US general election as he took a swing at tech platforms Google and Facebook for censoring conservative voices.

The billionaire executive chairman of News Corp told shareholders in the media giant in the US on Wednesday (EST) that Mr Trump was not helping conservatives focus on the future and contribute to public debate. 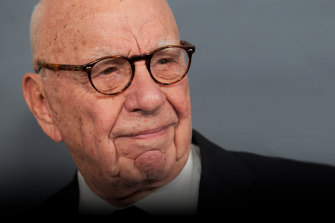 Rupert Murdoch: “The past is the past”

“The current American political debate is profound, whether about education or welfare or economic opportunity,” Mr Murdoch said. “It is crucial that conservatives play an active, forceful role in that debate, but that will not happen if President Trump stays focused on the past.”

News Corp owns a controlling stake in Australian pay TV platform Foxtel, as well as local newspapers such as The Australian, Sydney’s Daily Telegraph, Melbourne’s Herald Sun, New York based The Wall Street Journal and London based The Times.

Mr Murdoch and Mr Trump have mingled in similar circles since the 1970s and both rose to prominence in the US through New York’s tabloid culture – Mr Murdoch as the owner of The New York Post, and Mr Trump as a subject of its articles. US media outlets have reported the pair became close after Mr Trump took the presidency and would frequently speak over the phone.

The relationship soured as Mr Murdoch’s cable news network, Fox News (whose commentators had championed Mr Trump during his presidency) released polls in the leadup to the 2020 general election that showed Mr Biden was more popular. An article by Vanity Fair in 2020 said Mr Trump had screamed at Mr Murdoch over alleged “unfair” coverage. Mr Trump’s frustration with the network grew when its election desk called Arizona for President Joe Biden during the week of the general election.

“The past is the past, and the country is now in a contest to define the future,” Mr Murdoch said.

The comments were made at the company’s shareholder meeting, where the 90-year-old also took aim at Facebook and Google over censorship and overcharging advertisers for their products.

News Corp is one of the more vocal critics of the tech giants and was an advocate of Australia’s news media bargaining code, which forces the tech platforms to negotiate with media outlets for use of their content.

“There is no doubt that Facebook employees try to silence conservative voices and a quick Google News search on most contemporary topics often reveals a similar pattern of selectivity—or to be blunt, censorship,” Mr Murdoch said.

Google is facing scrutiny after an unredacted version of the Texas Attorney general’s ad tech antitrust probe was released, alleging use its monopoly in online advertising to kill competition and for colluding with Facebook (which is now owned by Beta). Meanwhile, News Corp publication The Wall Street Journal released hundreds of documents leaked by whistleblower Frances Haugen about the impact it was having on society. Mr Murdoch said the recent reports showed a need for more reform.

“The collusion between the two companies on ad tech as alleged in the Texas Attorney General’s complaint is extraordinary…obviously, publishers have been materially damaged, but companies have also been over-charged for their advertising and consumers have thus paid too much for products,” he said.

“The idea falsely promoted by the platforms that algorithms are somehow objective and solely scientific is complete nonsense. Algorithms are subjective and they can be manipulated by people to kill competition and damage other people, publishers and businesses.”