The six biggest campaign questions of 2022

It was the busiest off-election year in recent memory.

But 2021, which is now fading into the rearview mirror, was a mere appetizer for 2022, which promises to be chock-full of primary and general election action on the campaign trail.

With the Democrats defending their razor-thin majorities in the House of Representatives and Senate in the midterm elections and 36 states holding contests for governor, campaign politics will once again return to center stage after taking a brief respite from the spotlight in 2021.

What does or doesn’t get accomplished this year in the nation’s capital will weigh heavily on the outcome of November’s elections.

And throughout the new year, the early moves in the 2024 presidential race will intensify.

Here are six major political questions that will hover over 2022.

Will COVID ease and inflation subside?

Democrats already faced historical headwinds heading into the midterm elections. But they’re also dealing with an unfavorable and, in some cases, downright hostile political environment.

Helping to fan the flames and fuel the decline in President Biden’s approval ratings has been the persistence of the coronavirus, the worst pandemic to sweep the globe in a century.

President Biden delivers remarks on the debt ceiling during an event in the State Dining Room of the White House, Monday, Oct. 4, 2021, in Washington.
(AP Photo/Evan Vucci)

Biden’s promise during the 2020 election to curb COVID vaulted him into the White House. But the highly infectious delta and omicron variants have sparked the spread of the virus to new heights.

Where the coronavirus stands this upcoming summer and autumn may find the president and his party either rewarded or punished by voters in November.

It’s a similar story with inflation, which has been partially fueled by global supply chain issues sparked by the pandemic. Republicans have been blaming Biden and his party for the surge in consumer prices. If inflation remains a top issue by summer, it will likely have a chilling effect on the Democrats’ 2022 prospects.

Will the Democrats complete their unfinished business?

The president signed a sweeping bipartisan infrastructure package into law in November, a feat his predecessor in the White House failed to accomplish.

But hopes of passing the Democrats’ massive human infrastructure and climate change combating spending bill were scuttled in the days before Christmas by Democratic Sen. Joe Manchin of West Virginia.

The White House and congressional Democrats vow to try again early this year. What they do — or do not achieve — will have a major impact on the party’s hopes of retaining its House and Senate majorities.

The president and congressional Democrats are also working to pass a sweeping election reform measure to cement national standards and to push back against new laws in GOP controlled states that increase restrictions in voting access rules.

Failure to pass a bill will likely have immediate consequences at the ballot box in November.

Do Republicans recapture the House majority?

Republicans need a net gain of just five seats in the 435-member House to regain the majority they lost in the 2018 midterms.

Republicans have history on their side. On average, the party that wins the White House in a presidential election loses more than 25 House seats in the ensuing midterm election. And the once-in-a-decade congressional redistricting process may favor the GOP, as Republicans control more state legislatures and governors’ offices than the Democrats.

House retirements are often seen as an early barometer of things to come in the midterms. The last time the House flipped, amid a blue wave in the 2018 midterms, there were 23 GOP retirements compared to just 10 among House Democrats. Competitive seats become even more vulnerable without a well-known incumbent with a healthy war chest running for reelection.

This time around, 23 House Democrats in 2021 announced that they’d retire after the current term or seek another office in the 2022 elections. Only 13 Republicans are retiring or running for another job.

Do Democrats hold onto control of the Senate?

The Senate’s currently split 50-50 between the two major parties, but the Democrats have the majority thanks to the tie-breaking vote of Vice President Kamala Harris through her constitutional role as president of the Senate.

Republicans need a net gain of just one seat in November to recapture the Senate majority.

The GOP’s defending 20 of the 34 seats up for grabs in 2022. That includes five open seats, including Republican retirements in the key battlegrounds of Pennsylvania and North Carolina and the competitive state of Ohio.

But before we get to the general election, the GOP has to endure competitive and, in some cases, combative Senate primaries in Ohio, Missouri, Arizona, North Carolina, Pennsylvania and Alabama. The Democrats face a handful of primary fights but not to the degree of the GOP.

Which party will control key states at the end of 2022?

Coming off of strong performances in two key gubernatorial showdowns in November, Republicans are optimistic about gaining more ground in the 2022 elections.

First-time candidate Glenn Youngkin, who hailed from the business wing of the GOP, defeated former Democratic Gov. Terry McAuliffe of Virginia, a state where Republicans hadn’t won statewide in a dozen years.

The eight states the GOP looks to flip in 2022 are Kansas, Maine, Michigan, Minnesota, Nevada, New Mexico, Pennsylvania and Wisconsin. Biden carried all those states — other than Kansas — in the 2020 presidential election. Democratic incumbent governors are running for reelection in all of those states, other than the key battleground of Pennsylvania, where the party seems to be coalescing around state Attorney General Josh Shapiro in the race to succeed term-limited Gov. Tom Wolf.

Similar to the Senate races, there are already competitive and potentially combustible GOP gubernatorial primaries in Michigan, Nevada, Pennsylvania and Wisconsin.

Republicans will be playing plenty of defense in Arizona and the blue states of Maryland and Massachusetts, where Govs. Doug Ducey and Larry Hogan are term-limited incumbents, and Gov Charlie Baker decided against running for a third term.

In the key battleground of Georgia, Republican Gov. Brian Kemp is hoping to survive to face a rematch with Democrat Stacey Abrams in 2022. But first things first. Kemp will have to fend off a GOP challenge from former Sen. David Perdue, who was encouraged to run by Trump.

The former president is aiming to defeat Kemp as payback for the governor’s refusal to help Trump overturn his narrow 2020 election loss in Georgia to Biden.

Will Biden and/or Trump run for the White House again in 2024?

These questions likely will remain unanswered until after November’s midterm elections.

“I am certainly thinking about it,” Trump said in a November interview with Fox News. “I think a lot of people will be very happy, frankly, with the decision and probably will announce that after the midterms.” 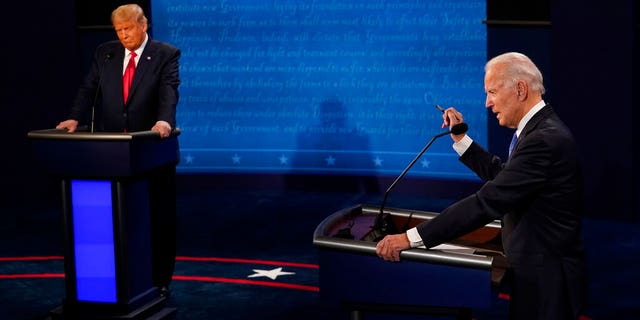 And the current president has said a handful of times during 2021 that he plans on running for reelection in 2024.

“If I’m in the health I’m in now — if I’m in good health — then in fact, I would run again,” Biden told ABC News recently.

Speculation regarding a Biden-Trump 2024 rematch will persist throughout the new year. But the former president’s repeated teasing and his continued kingmaker’s role with the GOP won’t prevent other potential Republican White House hopefuls from stepping up their travel to the crucial early voting presidential nominating states.