The New York City Public Design Commission voted unanimously to remove a statue of Thomas Jefferson, the author of the Declaration of Independence and the third president of the United States, from the New York City Council’s chambers at City Hall.

The commission debated a plan to loan the 187-year-old statue, which has resided inside City Hall since 1833, to the New York Historical Society in order “to protect the artwork and provide opportunities to exhibit it within an educational and historical context.” Yet Commission President Signe Nielsen opposed the plan because the society is a private institution that charges a $22 entrance fee. The statue’s future remains uncertain.

Yet the commission voted unanimously to remove the author of the Declaration of Independence from its legislative chamber by the end of the year, The New York Post reported.

“We acknowledge that the piece needs to be removed from the City Council chamber,” Nielsen said after the vote. “We as a commission will act before the end of 2021 in finding an appropriate location where it remains in the public realm.”

The commission did not immediately respond to Fox News’ request for comment. 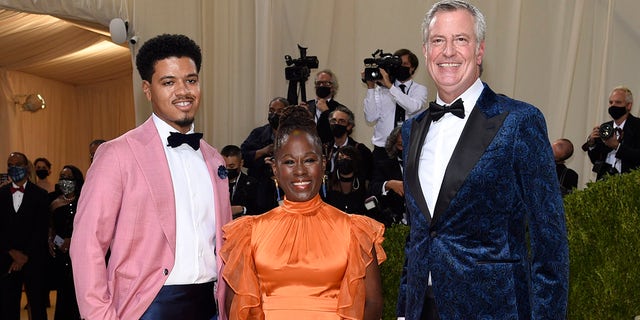 Dante de Blasio, from left, Chirlane McCray and Bill de Blasio attend The Metropolitan Museum of Art’s Costume Institute benefit gala celebrating the opening of the "In America: A Lexicon of Fashion" exhibition on Monday, Sept. 13, 2021, in New York. (Photo by Evan Agostini/Invision/AP)

“There’s so much about Thomas Jefferson and his own personal writings, memoirs about how he treated his slaves, his family members and things of that nature and how he perceived African Americans and slaves — that they lacked intelligence, that they were not to assimilate into society,” Miller told The New York Post.

“For us to really highlight such an individual is really not who we are as a council,” Miller said.

Democratic mayoral candidate Eric Adams has supported the statue’s removal, calling on the commission to start “uplifting underrepresented faces and communities” at City Hall. Republican challenger Curtis Silwa said he wanted the statue to stay, claiming that its removal would involve erasing history.

“The de Blasio administration will continue the progressive war on history as he, himself, fades away into a portrait on a City Hall wall,” Councilman Joe Borelli, R-Staten Island, told The New York Post about the statue’s removal. “I hope he is at least gone a couple hundred years before someone cancels him.” 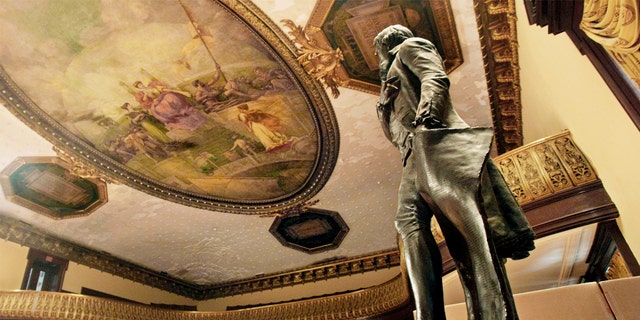 A replica of the statue remains on display in the Capitol Rotunda in Washington, D.C.

The removal of public monuments began with calls to remove the Confederate monuments. Yet the movement grew as activists began to target America’s founders, as well. During the riots in the summer of 2020, vandals spray-painted “1619” on a toppled statue of George Washington, in an apparent reference to The New York Times’ 1619 Project.

Then-President Donald Trump predicted the iconoclasm against figures like Jefferson back in August 2017.